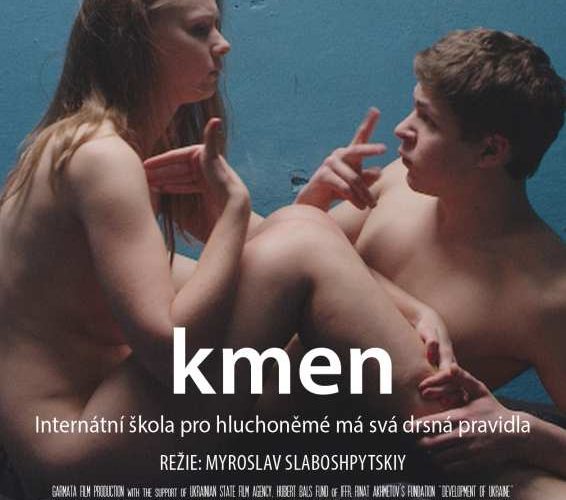 There tends be a lot of hyperbole tossed around about certain types of movies being a groundbreaking, one-of-a-kind experience, but that statement actually rings true for Myroslav Slaboshpytskiy‘s debut feature film The Tribe. Devoid of any spoken words, music, voice-over or even subtitles, the film is communicated through sign language and all the characters are deaf. This provides a unique challenge for any audience member not versed with how to sign, as the filmmaker provides no direct explanation of what characters are actually saying. While this may initially seem daunting, a viewer’s patience and keen observation is rewarded by a haunting cinematic voyage that truly is unlike anything else one is bound to witness in a theater this year.

Set in a specialized boarding school for young deaf adolescents, the singular lens focuses primarily on Sergey (Grigoriy Fesenko), a down-on-his-luck teenager seemingly abandoned by his family and left to find refuge in an environment more conducive for the handicapped. Upon arriving to the austere institution, the setting seems oddly welcoming, with students and teachers participating in some type of celebratory ceremony. However, as soon as Sergey attempts to get comfortable in his dormitory, the hierarchy of the so-called ‘tribe’ of students quickly becomes apparent, as he is thrust into a twisted version of survival of the fittest. First, the school is run by a gang of thuggish students who bully those weaker than them, sometimes quite violently. Their despicable actions are facilitated by a group of corrupt teachers who in turn take advantage of these students, from having them smuggle in contraband to pimping out underage girls to have sex with weary truck drivers late at night, ultimately profiting from their misery. As Sergey struggles to move up the ranks of this sordid teenage mafia, he falls in love with one of the girls, Anna (Yana Novikova), who is being used as a prostitute. Their love affair is captured vividly and Slaboshpytskiy is not shy about allowing his actors to bare their souls in order to achieve a richer, more complex vision of their warped modern romance.

Stylistically, the film is shot in stunning, unbroken long takes reminiscent of Cristian Mungiu, Nuri Bilge Ceylan and even Bela Tarr (minus the black and white). While there is a formality to this type of cinema, the mise-en-scène feels stripped down and more apropos to a gritty crime film, akin to something like Jacques Audiard’s The Prophet. Yet the scope and ambition of the mild-mannered narrative propels it to something more grandiose like The Godfather. Keep in mind that with all this going on, the film still demands one’s utmost attention if there’s hope to glean any of the subtleties and nuance of what is actually happening, thus making the emotional investment in the characters that more potent. As the film spirals to its horrific climax, the performances of these young actors is a marvel to witness, channeling painful truths of Ukrainian culture. Easily the most intense movie experience of the the year, The Tribe is an unsettling examination of how the oppressed can become the oppressor.

The Tribe screened at Fantastic Fest and will be released next year by Drafthouse Films. See the trailer above.