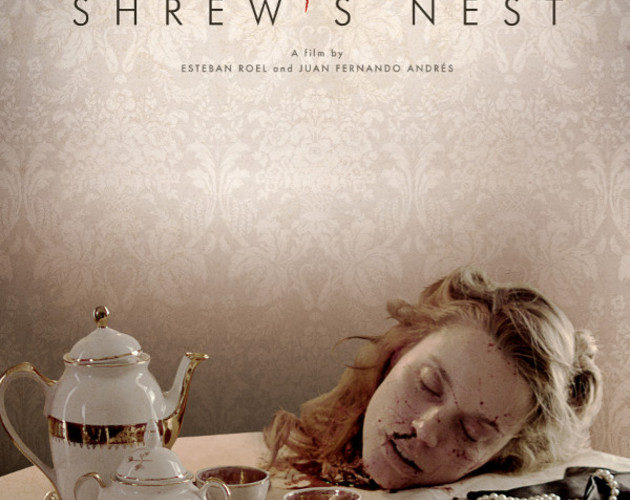 Considering many of the Fantastic Fest selections revolve around extremes, people going insane is a common theme. Because of that you are given the unique ability to watch separate films dealing with similar circumstances. A highlight in that light is Shrew’s Nest, a film that plays towards the strengths of a period drama in which sisterly love and the ultimate power to kill is explored. Montse (Macarena Gómez) is clearly the alpha female in the household, but she is hampered by her agoraphobia and deeply religious beliefs. When her lovely younger sister (Nadia de Santiago) turns 18, Montse sees it as a threat against her own livelihood and attempts to keep her from various male affections. But when Montse discovers a passed out neighbor, Carlos, at the foot of her door, her world starts to take on a new life.

A film that builds a world before they knock it all down will always draw my attention so I was putty at the hands of directors Juanfer Andrés and Esteban Roel. There’s a careful attention to so many small details about Montse and her sister that one is immediately pulled into their world set in 1950’s Spain. Montse is a skilled seamstress that has a few wealthy patrons with one in particular that dotes on her, giving her morphine for her fits and shivers. Some of this might be sheer kindness, but one also gets the feeling that it is mutually beneficial: her shakes and shivers are abated so she can continue to make fine dresses. Montse has raised her younger sister since their mother died in childbirth and their father disappeared during World War II. She is confined to her home, dressed in black and sports not a hint of make-up or frills. Her deeply religious belief extends through the iconic statues and figures littered around the apartment. As the film progresses we learn more about her ailments and we find out that she is haunted by her father in more ways than one.

Again and again, it is Gómez that shines. Whether she is playing the innocence up with her character’s gentle touch, or embracing the madness deep within her, she is a revelation throughout. Her violent shivers and even her careful lies all round out the character to be something worse than evil: pitiful. Early in the film the two sisters have a violent confrontation and yet when Montse is eating breakfast in the morning, you see her sister and you wonder how deep the bond goes and what it will take to break them apart.

I love the way that by the finale one almost knows the twists of the apartment they live in so as characters move one can predict their intentions. Some films try to hide the layout of a home or central location to keep the tension high and give us twists and turns we don’t expect, but not here. Yes, we break out of the apartment a few times but the majority of it takes place within the sister’s home and by the end I was convinced that in many ways the place was haunted itself. There are moments that the sound mixing seemed to be a bit off, with heeled shoes clacking on wooden floors that don’t attract the attention of people in the same flat. But I’ll forgive the few instances this occurs and submit to the tension and atmosphere the film builds.

Great villains are hard to come by in film, but Shrew’s Nest has a new one that simply must be seen. While Gómez surely shines, the directorial decisions by Andrés and Roel show incredible promise. For a film from first-time directors you’d expect more than a few missteps, but Shrew’s Nest proves that wrong. Dark, confident, and full of rising tension, this is a film that feels more suited to be credited towards horror and thriller veterans.

Shrew’s Nest screened at Fantastic Fest. See the trailer above.