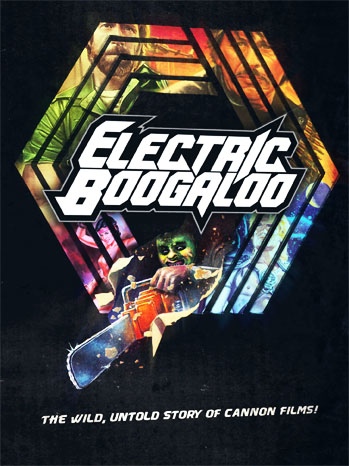 At a certain point around the hour mark, Electric Boogaloo: The Wild, Untold Story of Cannon Films starts to lose its energy. Beginning as a hilarious and insightful documentary, it chronicles a story that is indeed wild and untold, with archival footage of B, C, D-grade and X-rated films from Cannon and the films produced by Menahem Golan and Yoram Globus, two Israeli cousins with Hollywood dreams. Mastering the pre-sale model, they essentially sold a territory a Chuck Norris flick with a slick poster and worried about the rest (including the script!) as an afterthought.

Directed with tremendous energy for much of its first half, as Cannon starts to wear out is welcome, so does this documentary. Perhaps Mark Hartley throws in one too many Chuck Norris trailers (which give the film the feeling of a never-ending Alamo Drafthouse pre-show). As energetic as Hartley’s Ozploitation Not Quite Hollywood, he’s admirably interested in low-brow cinema studies. While some interviewees include once-aspiring actresses exploited by the Cannon system, including Catherine Mary Stewart (star of the Golan-directed “opus” The Apple), many provide personal anecdotes about Golan and Globus, later known as the Go Go Boys. The film is most effective when its building the history of Cannon, an outfit that originally made sexplotation flicks that blurred the lines between B-movie and pornography. Golan and Globus mastered film production in the niche market of 1970’s Israel, including war pictures and the domestic box-office smash, Boaz Davidson‘s Lemon Popsicle, a teen sex comedy later remade by Davidson for Cannon as The Last American Virgin. The fascinating disconnect, and perhaps what separates cinephiles from those able to make films, is that Golan and Globus were frequent moviegoers who essentially were mad men in the edit room. As interviewees, including Mark Kraft (who became head of Cannon’s music department in his 20’s) states, there was something lost in translation as Golan and Globus strived to produce what Americans think they wanted. The quality of Cannon’s work lead to the end of a distribution pact with a down-on-its-luck MGM. The film remains limited in scope, however, as Golan and Globus refused to participate in the production of this film.

In true Cannon Films fashion the cousins were off working with filmmaker Hilla Medalia on a legacy-shaping rival documentary The Go-Go Boys: The Inside Story of Cannon Films (currently without a US festival play date or distributor). This telling of the story is intentionally an over-the-top celebration that’s stranger than fiction. While on the whole its not terribly academic in its approach, the film and its interviewees do find fascination in some of the violent themes at work in several Cannon features, including those by Michael Winner, whose fascination with sexual violence and portraying urban landscapes as dark, scary places was truly morbid.

Perhaps a story this epic deserves a mini-series (or a double feature with the Go-Go Boys), but as hilarious as multiple Death Wish trailers are, Hartley falls back on one too many of them for a laugh. Cannon, for its extensive filmography, did include some higher brow works including Otello and Barfly (filmmakers Franco Zeffirelli and Barbet Schroeder seem to have been given freedom), while becoming a quasi-outsourcing operation for franchise films with low expectations, including the low-budget Superman IV: The Quest for Peace and a planned Spider-Man film. With insights from Dolph Lundgren, Bo Derek, Robert Forester, Alex Winter, and Tobe Hooper, Electric Boogaloo is a wild, entertaining and insightful history on the surface, but beneath it, there’s room for exploration — perhaps something was lost in compressing a mini-series worth of information into a feature film.

Electric Boogaloo: The Wild, Untold Story of Cannon Films screened at Fantastic Fest and will be released by Drafthouse Films.