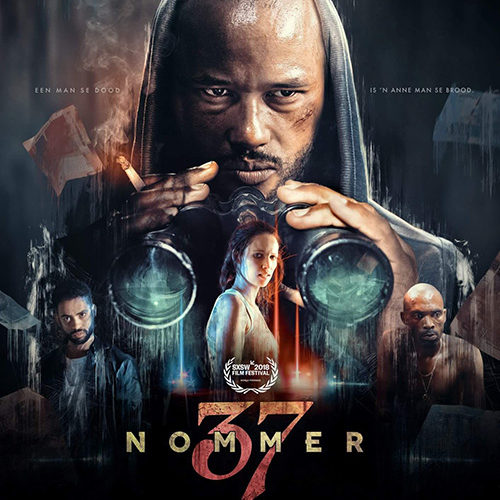 Fantasia Review: ‘Number 37’ is a ‘Rear Window’ Throwback with a Brutal Touch

It was a calculated risk lock-picker Randal Hendricks (Irshaad Ally) was willing to make. Borrow twenty-five thousand dollars from a loan shark he’s known since childhood (Danny Ross’ Emmie) and flip it to some gangsters willing to give him a deal on drugs. Sell the drugs at a mark-up and he should have enough to get himself and his girlfriend Pam (Monique Rockman) out of their rough Cape Town slum. Like Emmie warned, however, gangsters aren’t to be trusted. So when we meet Randal again months later to discover him a paraplegic being carried to his apartment by a neighbor (Ephram Gordon’s Warren), it’s easy to assume things went south. Now broke, unable to walk, and indebted to a psychopath, the clock on his life begins counting down. Writer/director Nosipho Dumisa’s Number 37 picks up much like Alfred Hitchcock’s Rear Window began: at a window, behind binoculars. A gift from Pam so he may pass the time alone during the day, Randal peers out while contemplating his volatile predicament. Besides watching Warren dance like a fool, Pastor White (Elton Landrew) discover bad news, and a couple women smoking joints and getting undressed, he also spies upon a local heavy named Lawyer (David Manuel) across the way. This guy is a real bad customer, one in bed with a dirty cop he has no qualms about killing inside the privacy of his own room. So what’s Randal to do? Call the police and testify? Or hatch a plan to blackmail this murderer from his wheelchair?

Dumisa (who alongside Daryne Joshua and Travis Taute wrote the original short) never forgets to remind us that Randal’s plans aren’t foolproof. We’ve seen the tragic result of his last scheme, so what’s going to make this one any better? At least he had a fighting chance to run away back then. Now he must act as quarterback while others do the dirtier, dangerous work below. At first he must give his trust to Warren — a guy he’s already suspicious about having a crush on Pam. Next her innocent bystander is recruited too. Randal believes himself an intelligent man and we’re inclined to agree besides his being a career criminal. The one thing he hasn’t yet learned is how smarts are worthless opposite fate, fear, and factors unknown. What follows is a series of unfortunate events placing Randal further behind the eight ball. Where he only had to worry about Emmie showing up to kill them, now he has to also watch his back where Lawyer is concerned. Add the greed of supposed friends and the tenacious if naïve investigative work of the last potentially clean detective in the city (Sandi Schultz’s Gail February) and the walls begin to close in tighter around Randal’s victim of pain and regret. And as the inevitable body count mounts, he finds that guilt too much to bear. But he can’t just tell the authorities everything that occurred. He can’t trust everything he says won’t instantly end up in Lawyer and Emmie’s ears. Securing Pam’s safety is paramount.

Number 37 proves a tense thriller wherein you’re never really sure how things will turn out. There’s as much chance Dumisa gives her characters a break by supplying a happy ending as letting circumstances snowball into oblivion. Celebrations are often a surefire sign vengeance is coming and we must sit and wait with Randal to discover what form it will take. Besides a couple scenes with Lieutenant February that must be visible for clarity’s sake, the film unfolds over Randal’s shoulder. Everything is filtered through his reactions from the uncertainty of letting Pam get lost behind closed curtains or the excitement of watching a con job succeed exactly as imagined. Take away those moments where February takes the lead and everything is silent unless Randal is within earshot. This means that Ally must be on his toes (so to speak) because he’s carrying the drama of the unknown. He handles it well, wearing the frustration of his injury on his sleeves as much as the worthlessness felt from being unable to dig out of a hole he’s created that’s already consumed too many friends. Rockman is great too as the devoted yet non-clichéd girlfriend who balances the line between selflessly acting out of love and begrudgingly out of necessity. Dumisa tightens the vice until Pam’s head is on the chopping block right alongside Randal — maybe more so since the use of her legs forces her to perform the heavy lifting. You can be sure that innocence is no longer present by the time the credits roll.

It all comes to a suspenseful head with a climactic, rapid-fire sequence of events putting everyone together with partial information. Emmie and Lawyer converge on Randal and Pam while February races to get back. Credit Dumisa for deftly earning our attentiveness because it’s easy to forget that not everyone knows everyone else once you find yourself consumed by the plot and characters. So even though the gunshots play out like you’d expect, there are still some surprises waiting as far as how everyone gets to their respective, carefully planned positions. Dumisa lets greed, rage, and ego rule their actions, refusing to pretend she didn’t create monsters that genuinely enjoy doing monstrous things. That darkness can be overwhelming and perhaps a tad heavy-handed sometimes, but it never feels false.