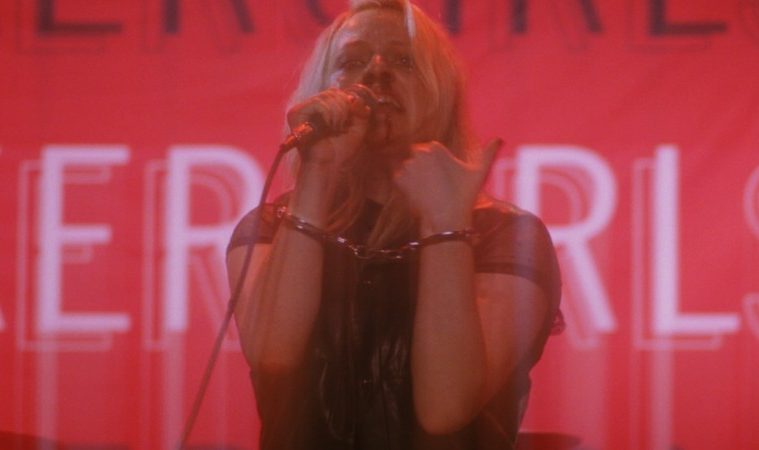 “Her Smell is an epic film. I mean, it’s epic in its own way.” So editor Robert Greene said about his fourth collaboration with Alex Ross Perry (following Listen Up Philip, Queen of Earth, and Golden Exits), the  tale of an alt-rock star’s descent into madness. Anticipation has been high, largely because the what and why of Perry’s approach to a new topic remains shrouded, save for a notice in NYFF’s blurb of “snaking long takes (arguably some of DP Sean Price Williams’s finest work) in claustrophobic backstage hallways, garishly lit dressing rooms, and recording studios.”

Her Smell‘s first teaser, released in advance of a TIFF premiere this weekend, gives some taste of that, Elisabeth Moss’ Becky Something purple-prosing her way through a swirling pre-show play for the cameras. Reviews will be emerging this weekend, including some on this very site, so stay tuned.

The latest from Alex Ross Perry traces the psychology of an unforgettable woman under the influence. Becky Something (Elisabeth Moss, in a powerhouse performance), the influential lead singer of a popular ’90s alt-rock outfit, struggles with her demons as friends, family, and bandmates alike behold her unraveling through a prism of horror, empathy, and resentment. Perry tracks Becky’s self-destruction—and potential creative redemption—through snaking long takes (arguably some of DP Sean Price Williams’s finest work) in claustrophobic backstage hallways, garishly lit dressing rooms, and recording studios, and the film’s ensemble cast (including Cara Delevingne, Ashley Benson, Amber Heard, Virginia Madsen, Dan Stevens and Eric Stoltz) is impeccable in support of Moss’s rattling trip to the brink. Her Smell plays at TIFF and NYFF.