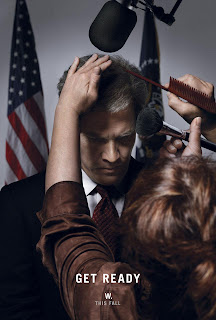 At the beginning of Oliver Stone’s “W.” most viewers will prepare themselves to groan, for surely a movie by the notoriously liberal-minded Stone about one the most conservative presidents’ in our country’s history could not be fair. And while it is certainly not 100 percent objective in its presentation, Stone’s film is not propaganda and not a cinematic “Vote Obama” rallying cry, but rather the story of an All-American man who, not ever really knowing what he wanted to do with his life, more or less tricks himself, and, with the help of his far more “intelligent” advisers, into becoming the President of the United States.

In many ways, Stone is sympathetic to George Walker Bush (Josh Brolin), a young man “living in poppy’s shadow” and the shadow of his younger brother Jeb (the current governor of Florida). Brolin puts him his best performance to date, establishing himself as an A-list actor and embodying our current Commander-in-Chief with a comfortable presence and full devotion to “George Bush, the person,” rather than “George Bush, the cariciature.”

At several points during the film Brolin is giving the option to go over-the-top with the performance, falling into SNL mockery. Yet he consistently refuses the choice, staying true to our president, confident, as Stone is, that George W. Bush has already given viewers plenty to laugh at.

And there is plenty to laugh at, or sigh at. Viewers will probably do both. Stone accepts that the man is an easy political target (perhaps the easiest) and decides to dig into the “why” of Bush rather than the “what.” He shoots the movie digitally, over-using close-ups while making a masterful use of focus and depth of field, most notably during Bush’s “Mistakes” speech towards the end of the film.

Jeffrey Wright plays Colin Powell as the noble warrior who watches an empire fall in the war room while he attempts to convince his fellow cronies that invading Iraq is a bad plan and rushed in its development. And the viewers sighs at the potential truth in this “behind the scenes” scene as they watch Dick Cheney (Richard Dreyfuss in a comeback role) smile and scowl simultaneously in the background. Thandie Newton bombs with her imitation of Condy Rice because, well, it’s just an imitation of a person, and not a good one at that. The best performances in the film (those of Brolin, Wright and Dreyfuss) are achieved not by imitating their characters but by understanding their motives and psychology, at least within the context of Stone’s film.

At film’s end, nothing too controversial is outed that has not already been proven or at least hinted at by one media source or another. But then Stone was never going for controversy. It appears that he, like most Americans today, is trying to answer the question: “How did this guy get elected president?” As for the ending, or rather non-ending, of the film, it echoes Bush’s personal opinion on what history will say about him. “In the history, we’ll all be dead.”