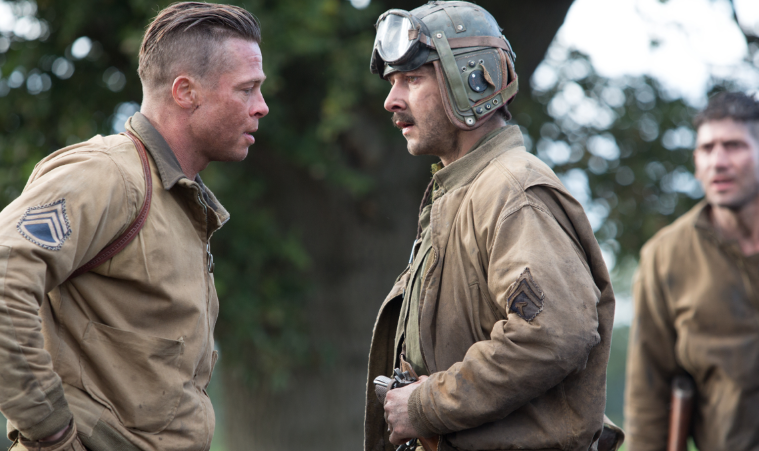 David Ayer and Jon Bernthal Discuss the Brutality, Accuracy, and Influences of ‘Fury’ “The year is 1945. An opening title card states that “every man, woman and child” have been mobilized to kill the Allies. David Ayer’s latest film, Fury, spends much of its time making a case for why we should care about the members of the five-man tank crew at the center of this film,” we said in our review. “As led by Wardaddy (Brad Pitt), the tank and its operators are in disarray. In the film’s potent opening, Wardaddy transverses a battlefield of broken tanks and machinery on horseback. It’s here Ayer where finds the film’s most poetic image — the durability of animal over man — and it’s a moment that capitalizes on the presence of its star to imbue Fury with some compelling point of reference.”

Also starring Shia LaBeouf, Logan Lerman, Michael Peña, and Jon Bernthal, we recently had a chance to sit down with the lattermost actor and the director to discuss their WWII tank drama. Among the topics discusses are the film’s influences, how it’s more European in its sensibilities, pushing the ensemble and having no safety net, crafting the film’s toughest scene, accurately recreating the war, and much more. Check out highlights from our conversation below.

“It’s a snapshot of a family,” the director says. “A lot of these war movies are about the big battle, will they save the world? This is a portrait of a family that happens to live in a tank and kills people. It’s an anonymous corner of the war. It’s a day in the life. It’s these brothers trying to survive and stay together, who love each other and hate each other, the best friends and the worst enemies of each other. I wanted to show that reality.”

Explaining how it differs from other films in the multipex, Ayer adds, “With modern american movies, you’re supposed to tell everybody everything — put a little bow on everything explain everything. You’re supposed to walk out of that theater and not have any questions. Movies used to be about raising questions, making you talk about it presenting you with something, a viewpoint about the world. I don’t want to say the dreaded thing, but I don’t know if this is more of a European movie in that sense. It’s this study of imperfect people. The characters represent how there’s different coping mechanisms for the most horrible situations, the movie is about live PTSD.”

On pushing the ensemble and having no safety net

“There was a long pre-production period to this,” Bernthal says. “It was intense; three months of sparring in the morning every day, six hours of tank training, then rehearsals at night. That was every day, six days a week, for three months before we even started. The last two weeks we spent in a very intense boot camp led by active navy seals. By the time we started shooting we really knew each other as actors, as people, and as characters. One of the specific things for me was the relationship with Shia’s character. We felt their connection between my character Grady (gun loader) and his character Boyd (gunner) had to be strong. Any time one of us smoked a cigarette we chose to share it. Any time one of us went somewhere I always looked to him. it was very much like a mother son relationship. I feel like Grady didn’t have to have a relationship with God because he has a relationship with Boyd. The tank will not make it unless these guys are absolutely in synch.” Ayer also discusses the lead of the film, saying, “What’s great about Brad is there’s no movie star crap. No entourage. No special treatment. He was in the mud with the guys and really became their big-brother. Off camera, he took these guys under his wing and helped them out. This guy is like a statesmen in Hollywood-world and when you get down to it, he’s a dude. He’s a bro. He’s this guy from the midwest, pretty traditional guy in a lot of ways. and maybe that’s why he connected with this character.”

“I come from a military family,” Ayer says, discussing his background. “I served and all that. It’s the people; you remember the people. You remember the characters. You remember the interaction and the brotherhood. When people in the Armed Forces see this they recognize the behavior, they recognize the depths of the relationships, when you’re willing to take a bullet for someone, for real, not as metaphor talk, there’s a bond there and that bond transcends anything. Anything other than your immediate family or your wife. There’s nobility in that. I just wanted to show that. It’s a hard thing to show because I have to take these five actors and turn them into this family, turn them into these brothers. As a director, I want them to know each other better than actors typically know each other and I’m trying to create relationships and friendships. The more pressure I can put them under the more they’re going to coalesce into a unit. That’s why they’re in the movie. They’re good dudes, they have this great chemistry together, but on top of it they are all willing to suffer for their art.”

“There is no safety net,” recalls Bernthal. “I remember Logan [Lerman] was a little nervous about how we were going to play a scene. I was like, ‘Dude, fucking hit me, just go.’ We did it so many times, my ear exploded at the end of the day. I want actors to get in my face, push me, get me out of my rhythm, and I try to do that for other actors. These are extreme circumstance they call for extreme measures, we all felt pretty damn good pushing each other. The only time if there was an sort of friction is if we went the other way, if we weren’t pushing enough.”

On crafting the film’s toughest and most pivotal scene

“This scene didn’t change from the first draft of the script. it was always consistent,” Ayer says regarding a pivotal scene we detail in our review. “There’s some ad-lib bits in there and some great moments. The script took a while to understand what the human dynamics were. As a writer, I knew what the scene was about, as a template versus living bringing it to life in the skins of characters. It took a while for the idea of the jealousy the other characters had for the relationship between Norman and Wardaddy. I didn’t focus enough on the photography, and the execution and articulate that visually. As my director of photography would say, ‘What’s the optical psychology?’ He’s Russian. I didn’t articulate the optical psychology. we ended up finding it in editing, scouring the footage for moments that tagged that optical psychology. Once we found those little nuggets we were able to string them together as a sub framework for a larger framework and then the scene really worked. It was the toughest scene to film. It was brutal. It’s the Thanksgiving dinner from hell, is how I think of it.” On David Ayer and the character of Grady:

“I was a huge fan of his,” Bernthal says regarding his fondness for Ayer. “I loved End of Watch and Harsh Times. He’s the kind of guy who does what so many filmmakers in Hollywood try to do but can’t: he writes real stories about real men and real brotherhood. He’s a vet. He’s a wrong side of the tracks kind of guy. He’s been in his share of scraps. He likes to work with actors who come from the same background as him. He also wrote a beautiful script. The story was incredible.  I knew that he was a hard ass guy and he demanded a lot from his actors. I don’t like movies that are fun and easy. He felt the responsibility to get it right.”

He continues, “I don’t think you can ever pinpoint as a character or a person as type of guy – like a good guy or bad guy. I try to avoid the archetypes even if they’re written a certain a way. I will say I’ve been very luck that I’ve gotten to play characters that are products of their environment and I think that what this guy Grady is. He’s been at this thing a long time. It has become him. The war is inside of him. It’s not about him being super tough or super mean, I think he’s super afraid. He’s been dealing with this fear for so long. The job, actually what he does every day, he loads shells into a cannon. He doesn’t pull the trigger, he doesn’t shoot people, he doesn’t punch people, he doesn’t get the release of killing an enemy after he’s seen so many people day. He’s manual labor. It’s not different than working at a plant. He knows the survival of his brothers and this tank crew, and his survival depends on how well he does his manual labor and the tenacity with which he does it. I think that walking around without that release is frustrating. He’s pent up and he’s horrified.”

On recreating World War II and the accuracy of the film

“I did so much research on it personally,” the director says. “I knew what everything was supposed to look like and I didn’t want to have to lean on my departments and trust their version of the movie. I had my version of the movie I wanted to make. It’s interesting when you make a big movie, it’s pacing. End of Watch was shot in three weeks. It’s a sprint. With this, it’s a marathon. You’ve got to slow down and pace yourself. I’m talking about workload as a director and make sure you don’t burn out early because then you’re in trouble. I guess it’s more pressure, it depends how you perceive pressure — pressure to get it right.”

Discussing the accuracy, Ayer adds, “I’ve had people call bullshit on stuff and call bullshit on the ending, like it never happened. Everything in the movie happened. Everything in the movie is real. All the experiences come from somewhere. I wrote as much primary source material as I could, talked to veterans, read tons of military reports, and looked for patterns and take things that felt emotional and representational to tell the emotional journey. A slice of life. A day in the life. Versus your traditional mission-based movie. I wanted the audience to go on an emotional journey, care about these guys, believe they’re real people, and come out of the movie worked. Like Norman [Logan Lerman] is the audience in a lot of ways. He has the worst first day at school ever. He comes out of that day as a transformed person. I wanted to make people think. I wanted to make people appreciate what a soldier goes through. At the end of the day, I made this movie for soldiers and people in the military and people who serve.”