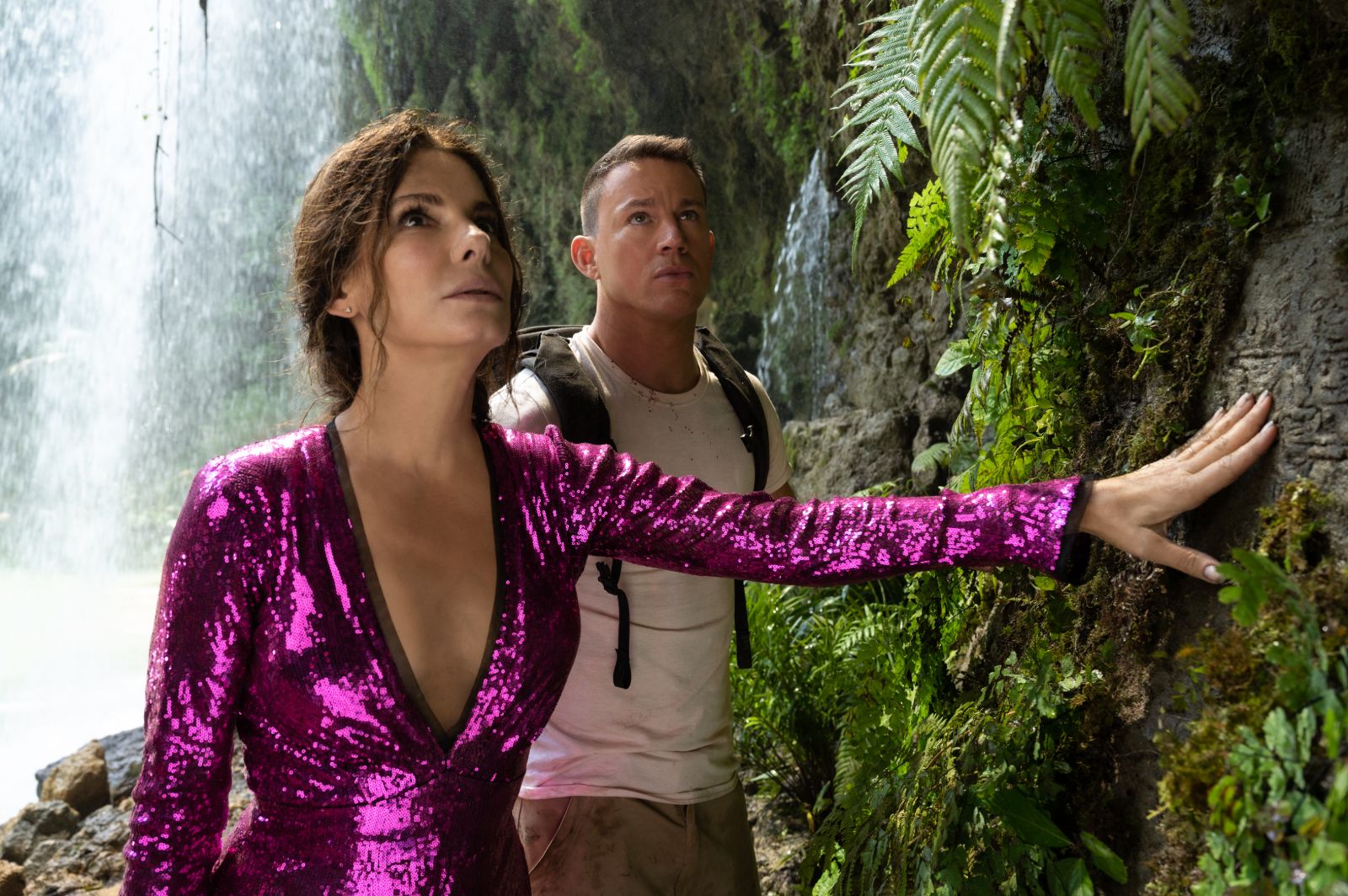 Without yelling at the clouds too loudly, let me just say: the theatrical experience is rough out there. There are still multiple screens dedicated to a certain web-slinging behemoth at any given cineplex. It’s an ever-present reminder that commerce is thriving, and movies for adults are, well, not. The rom-com, and studio comedies in general, have been all but relegated to streaming for some time now, that is if they aren’t chunked up into eight hour-long episodes as content fodder. It’s a hostile environment for a big-budget Sandra Bullock romance vehicle, but here we are. Despite those odds, The Lost City is a respite, an oasis, for anyone just looking to get away.

Helmed by Aaron and Adam Nee, from a script by the two in addition to Oren Uziel and Dana Fox, the film follows reclusive, widowed romance novelist Loretta Sage (Bullock) as she begrudgingly trots out her final novel––the last in a series of bodice-busters she made her name on. In tow is Alan (Channing Tatum) her eager, himbo cover model. Upon starting her book tour, the film makes quick work to whisk Loretta away to a South American jungle, as she’s kidnapped by a villainous billionaire failson (Daniel Radcliffe) in the hopes of uncovering a bejeweled crown hidden in the titular city. Not unlike Kathleen Turner before her, Bullock’s novelist finds herself trapped in the middle of one of her own lurid adventures. In any other time this would feel like a trite rehash, but in our current media landscape such a premise feels welcome, given the scarcity.

The first key to success is that, whatever its status as a romance-adventure-comedy, it leans to laughs first. It’s slight on booby traps or ancient riddles, but buoyed by the talents on display. There’s some action and derring-do to be had (which peaks with Brad Pitt’s comically handsome ex-Navy SEAL), but it’s generally an afterthought. In both substance and atmosphere, the adventure at the center provides little more than a backdrop for the comedy and chemistry. Like last month’s Uncharted, this film’s look is from the same school of hermetically sealed blockbusters, complete with a layer of digital smudge. Dean Cundey’s work on Romancing the Stone feels like guerilla filmmaking by comparison, but that was an adventure first, and as such none of that is quite so essential here.

Although it’s a semi-carbon copy of Zemeckis’ 1984 adventure, The Lost City proves to be a palpable case study in the undeniable voltage of real movie stars. Sandra Bullock has been one of our best for three decades, with no signs of stopping here. She equips her grief-stricken romance author with tools from the Gravity and Miss Congeniality playbooks as if to call forth all the multitudes we’ve come to love her for. Unsurprisingly, Channing Tatum rises to meet her. Always at his best as characters that punch above their weight, he oozes a kind of insecure affability that (outside of the obvious reasons) makes him so pleasant to watch on screen. They’re a pair of professional charmers who make it look all too easy. That’s to say nothing of what actual, potent sexual chemistry can achieve in the middle of the jungle. Dwayne Johnson and Emily Blunt could certainly learn a thing or two. Muddy green screen work and iffy VFX vistas be damned, Sandy and Channing are the spectacle.

The Lost City believes in a joke-a-minute ethos. It doesn’t all land with guffaws but nets a good hit-to-miss ratio all the same. This is in no small part due to the chops of its supporting players. As Loretta’s publisher and assistant respectively, Da’Vine Joy Randolph (Only Murders in the Building) and Patti Harrison (I Think You Should Leave) are MVPs. Between their acidic repartee and Radcliffe’s cartoonish menace, keeping up the momentum is a team effort.

The easy-breeziness of it all anchors this whole film’s appeal. There’s no brand to gravitate to or dopamine reward for recognizing things you grew up with––just charisma, comedy, and star power in spades. In that respect, the most wondrous thing about The Lost City is that it even exists.

The Lost City opens in theaters on March 25.