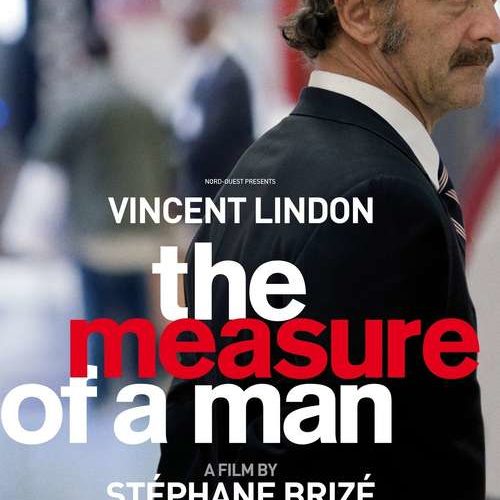 [Cannes Review] The Measure of a Man

The Measure of a Man is not a film that will be lauded for its direction nor for its cinematography, screenplay or editing. It’s a film that will be remembered for its absorbing lead performance. Vincent Lindon takes one deep into the mind of Thierry, a man who has recently lost his factory job and is now trying desperately to find work. Unfortunately, obstructions of the modern world, from the current state of the economy to the introduction of technology in the workplace, prevent him from doing so and thus he struggles to support his family financially.

After impressing in Claire Denis’ recent atmospheric thriller, Bastards, Lindon goes to greater lengths here, deeply sinking into his role and displaying Thierry’s very human vulnerabilities and weaknesses. Directed by France’s Stéphane Brizé, The Measure of a Man manages to be a merely capable Dardennes-esque social realist piece of filmmaking, but Lindon’s performance is perhaps the finest of this year’s festival.

Aside from his performance, there are other elements to appreciate within its overt commentary on how difficult it can be to find and maintain a job in the contemporary economic climate. While this was a fitting skeleton for the film’s message, its peripheral commentaries and the ability to hint at factors beneath the surface of the plot is where the film excels. Reminiscent of Andrea Arnold’s 2006 film, Red Road, it argues that technology (e.g. video surveillance footage) plays an important role in the protagonist’s daily activities and the ultimate outcome of their story.

As Thierry navigates his way from interview to interview, he is sometimes forced to conduct them via Skype, a means of communication that he seems uncomfortable and awkward to be engaged in. A particularly memorable albeit frustrating scene shows a group of individuals watching one of Thierry’s practice interviews; when the interview concludes, each person in the room takes a turn harshly critiquing Thierry on some aspect of his “performance,” from his body language to his posture to his tone. It’s a tough scene to endure, but through Lindon’s complex facial reactions, the scene is transformed from an irritating experience into an absorbing one.

Another below-the-surface implication that is captured is the film’s portrayal of families. The more one finds out about the families, the more is understood about how desperate these people are to pay their bills, and the extent to which they will risk their well-being in order to support the ones they love. Thierry is the clear example of this as a man who one unquestionably roots for throughout the duration of the film once we come to understand the true reason why he is so desperate for pay: his son is disabled. However, the true ethical dilemma in the film arises when a tragedy results from a morally questionable attempt by one of Thierry’s co-worker’s to help her drug-addicted son. The result of this tragedy forces Thierry to make a decision, one that he struggles with until the strong final moments.

The Measure of a Man wears its influences on its sleeve, but never attempts anything that the Dardennes didn’t already with their great ‘90s works, Rosetta and La Promesse. In fact, much of this film feels like an updated version of Rosetta, rather with a older male lead. Brizé creates such an exhausting experience, with Thierry being constantly beaten down by his working class environment, that it could’ve been slightly tighter as the ordeal begins to feel repetitive. Rather than existing to entertain, this is a drama that performs as a mirror in an attempt to recreate life and portray the struggles of the working class. While it may not bring a great deal new to the table, its central performance is one not to be missed.

The Measure of a Man premiered at Cannes Film Festival and opens on April 15th. See our coverage below.