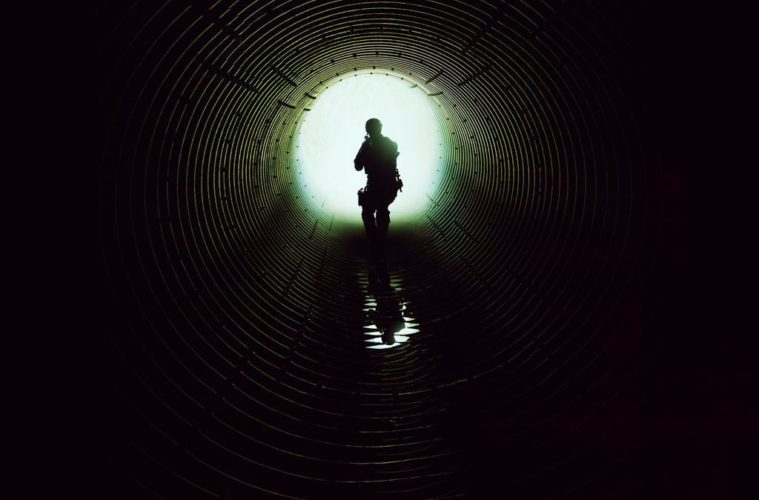 With each film, Denis Villeneuve proves his talent for crafting extremely effective visceral spectacles, ensnaring the viewer through expert engineering of mood and action. Yet, with each film, he undermines his achievement by attempting to aggrandize his narratives with weighty undercurrents that are, in fact, desperately vacuous. While Sicario is no exception, unlike the insufferably pretentious Enemy, it delivers a constant, exhilarating stream of elaborate and exquisitely photographed thrills that ends up largely compensating for the would-be profundity.

The excitement is dished out from the very start. The film opens to a thumping soundtrack, with racing helicopter vistas of the Arizona desert leading up to an FBI team’s raid of a Mexican drug dealer hideout in which a truck is used as a battering ram. Here as well as in the many set pieces that follow, the shot choreography is breathtaking as Joe Walker’s razor-sharp editing escalates the scene’s intensity at a breakneck pace, erupting in a stupefying climax. These, in turn, are kept judiciously compact. Rather than drag out the action and dilute its impact, Villeneuve quickly brings the film’s heart rate back down, only to gradually accelerate it again, re-starting the cycle, which continues uninterrupted for the film’s entire running time.

The opening raid leads to the discovery of dozens of corpses hidden inside the walls. Through a quick succession of events, the officer leading the raid, Kate Macy (Emily Blunt), ends up working with Matt Graver (Josh Brolin), a supposed Department of Defense consultant, and his associate Alejandro (Benicio Del Toro), who have been hired to take down the leader of the Mexican drug cartel responsible for the massacre. The reason why the unmistakeably shady Graver is so intent on Macy joining his team even though she works in hostage rescue is initially unclear. Her many questions in this regard are brushed off each time and we share her confusion as the film hurtles along on an intricate plot involving illegal irruptions into Mexican territory, sting operations, kidnappings and enhanced interrogations, the latter eagerly carried out by Alejandro as Graver watches with gloating relish.

Psychologically, by situating an idealistic heroine at the heart of a militarized manhunt and forcing her to confront its sordid ethical realities, Sicario clearly aims to be the Mexican drug war’s Zero Dark Thirty (also on a visual level Villeneuve borrows a lot from Kathryn Bigelow’s film, for example a lengthy night-time ambush rendered in night-vision). Sociopolitically, its depiction of the border town of Juárez as a hell on earth where mutilated bodies hang from bridges and children play in the shade of the Border Fence strives for a pessimistic message along the lines of Amat Escalante’s Heli. The former falls flat given that Macy remains a passive character who aside from voicing useless complaints is deprived of any real agency, and the latter is even less successful, since Juárez primarily functions as an exotic dystopian backdrop for the protagonists to fight their way through or out of.

Though unsatisfactory, these attempts at commentary are handled so perfunctorily and their recognition is so reliant on clichés, they’re more silly than properly detracting. In any case, Villeneuve’s otherwise vigorous and consistently inventive direction, coupled with the uniformly stunning widescreen compositions by legendary DP Roger Deakins (returning to the territory he already captured so spectacularly in No Country for Old Men), offers plenty to enjoy.

Sicario premiered at Cannes Film Festival and will open on September 18th. See our complete coverage below.