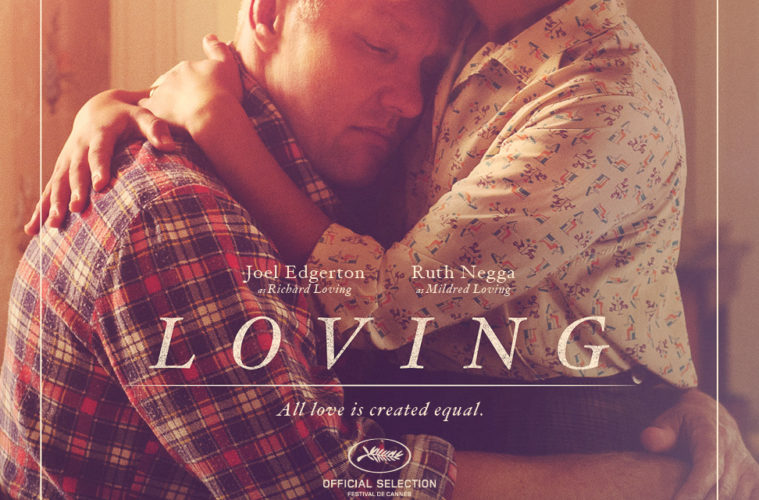 Ruth Negga and Joel Edgerton deliver remarkably nuanced performances in Loving, a late-’50s- / early-‘60s-set true life story of a mixed-race couple whose illegal marriage became a landmark case in the United States Supreme Court. Having tried his hand at the coming-of-age drama (Mud) and both small- and large-scale science fiction (Take Shelter and Midnight Special, respectively), the increasingly prolific Jeff Nichols branches out once more here to the awards season period drama. This heartwarming and wonderfully refined film might not do a whole lot of things we haven’t seen before in the civil rights-era picture, but it does the familiar stuff with enormous care and control.

As they say about these sorts of things: you just couldn’t write it. In June 1958, at the age of 18, Mildred Delores Jeter — of African American and Native American descent — became pregnant with the child of Richard Loving, a 24-year-old white man. Nichols picks up their story from here. Wishing to legitimize their child, the young lovers left their home state of Virginia — where mixed race marriage was illegal — and traveled to Washington D.C. to elope. Upon returning home, they were arrested and later sentenced to either stay out of Virginia for the next 25 years or face a year in prison. With a child on the way, they choose to plead guilty and move to Washington to raise their children, leaving their families behind. Five years later, with the civil rights movement gathering steam, Mildred contacted Bobby Kennedy, a correspondence that would lead to the case of Loving vs. Virginia going all the way to the Supreme Court in 1967.

Nichols is not the first to take this story to the screen — Oscar-nominated screenwriter Richard Friedenberg wrote and directed a TV movie called Mr. and Mrs, Loving in 1996 and HBO released a documentary on the Lovings titled The Loving Story in 2012 — but we can presume Loving might be the definitive one. He’s the first to dramatize the events on a large canvas and, if anything, it’s almost a wonder that it has taken Hollywood this long. Taking his usual duties as writer-director, and working with regular cinematographer Adam Stone and editor Julie Monroe, Nichols has crafted a beautifully moving and tasteful document of a quietly groundbreaking event, told from a very human perspective.

Almost free of rhetoric, we spend only a few choice moments in the type of legal settings that have come to represent an all-too-easy emotional quick fix for prestige filmmakers. Instead, Nichols focuses his story on the sheer Americanness of the family, observing them in the kitchen, at the local drag race, or working in the garage.

Played with an almost unrecognizable stone face by Australian actor Joel Edgerton, this Richard Loving is camera-shy and inarticulate, but undeniably wholesome and warm. Nichols has a great eye for blue-collar types: their core values and manner, as well as the weight and texture of their plain white T’s and plaid shirts. It’s the role we’re used to seeing Michael Shannon take in Nichols’ movies, and the great Kentucky native (a staple in the director’s work to date) does show up as photographer Grey Villet, who produced an intimate photo essay of the couple for LIFE magazine. Villet noticed these same patriotic qualities and photographed it accordingly.

Ruth Negga is perhaps even more impressive as Mildred, Richard’s mixed-race wife. Born to Irish and Ethiopian parents, the actress plays it just as soft-spoken as her co-star, but with even more nuance, annunciating the vowels of the Virginia lilt (that’s veery geenerous) with clarity, moving with a gate appropriate to the period, and laying waste to most scenery with little more than a disarming smile.

Granted, Nichols plays the familiar hits here but also proves himself to be adept at knowing when to hold back, with regular composer David Wingo only seldom relying on the minor chords. The results are an undeniably moving and also very fitting tribute to a couple who appear to have appreciated their privacy. There are no final arguments to the jury to be seen, no overly abusive police officer, no bricks through the window at night (although a stationary cinder block is used to similar effect). Nichols simply lets the injustice do the talking.

Loving premiered at the Cannes Film Festival and will be released in the U.S. by Focus Features on November 4. See our coverage below.