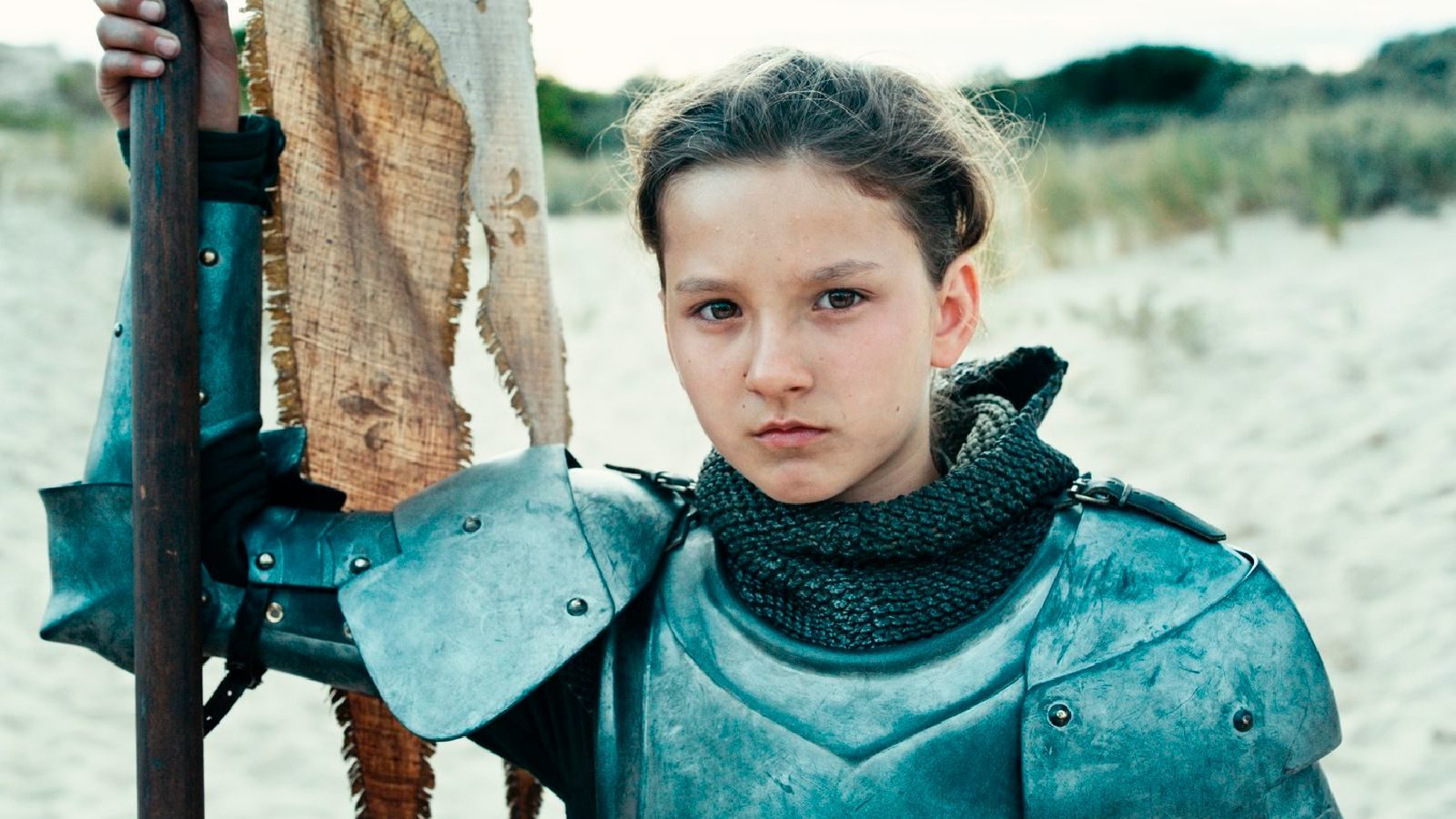 When Jeannette world premiered in Cannes’ Directors’ Fortnight in 2017, Bruno Dumont’s acolytes were left grappling with a taxonomical head-scratcher. Lo and behold, a director whose filmography had by and large consisted of austere and somber ruminations on life, death, and the divine, homing in on a historical figure that promised more of the same, and heralded a rebranding of sorts. For a martyr who’d been sanctified on the silver screen as far back as Carl Theodor Dreyer’s 1928 The Passion of Joan of Arc, Jeannette looked like nothing that came before it. A musical rendition of the Maid of Orleans’ childhood and early teenage years, it framed the heroine’s spiritual awakening through the least likely rubric imaginable: heavy metal music. It was reckless, bonkers, and delightfully original.

Where Jeannette had effectively represented a stylistic and tonal departure from old Dumont, Joan of Arc is a detour to familiar, more somber moods. Part of this owes to the simple fact that for the martyr-to-be, now in her late teenage years, things have taken a dramatic turn. Opening in the year of the Lord 1428, Joan of Arc finds its eponymous heroine at the helm of the French army, besieging English-occupied Paris. It’s a war neither church elders nor the high military echelons seem all too optimistic about, and Joan of Arc’s first act follows the then-17-year-old struggling to rally a patriarchy behind her vision. Acts two and three chronicle the price she paid when, having kicked the English out of France and helped reinstate the monarchy of King Charles VII, said patriarchy eventually punished her act of defiance. It’s a neatly divided triptych: Joan at war with the English; Joan at war with the church elders who declare her a heretical; Joan’s last prison days ahead of her death at the stake.

Those approaching Jeannette’s sequel hoping for more of the head-banging choreographies designed by Philippe Decouflé or Igorrr’s heavy metal score should be warned: Joan of Arc features neither. Where electronic music was an enthralling companion to Jeannette’s mystical ecstasy, Igorrr’s beats capturing her awakening as an electrifying rupture that made the girl, saints, and friends whip their hair back and forth, Joan of Arc’s music celebrates a late teenager who’s both acquired a certain spiritual maturity and hierarchical stature. Speaking to The Film Stage from Locarno last year, Dumont had announced he’d been relying on the melodic ballads of French pop singer Christophe–though the 73-year-old’s falsetto tunes, based on the Belle Époque play that served as source material for Dumont’s two-part saga, Charles Péguy’s “The Mystery of the Charity of Joan of Arc,” are far more scarce than the sort of omnipresent collagen Igorrr’s score had offered.

The mix of heavy metal and maddening dances poured plenty of dynamism into Jeannette’s dialogue-heavy script, making up for the lack of battle and action scenes with outrageous dances that both did their fair share of narrative heavy lifting and loosened up some of the most abstract theological disquisitions. Joan of Arc is both a far less musical and less playful follow-up. Save for a mesmeric and near-hypnotic choreography featuring the knights of the National Guards staging one of Joan’s battles, David Chambille’s camerawork adjusts to the austere mood with a somewhat static framing, characters and camera remain motionless, the latter often fixed on Lise Leplat Prudhomme as she stares in fourth-wall breaking shots while Christophe’s songs play out in full.

Much like in Jeannette, Dumont’s parsimonious production design keeps values at a bare minimum, with characters dotting the sprawling exteriors of France’s windswept and dunes-filled North-West, or the belittling marbles of Amiens’ cathedral (the first interiors in Dumont’s Joan diptych). Soldiers, saints, and prelates emerge from the wilderness and are swallowed back into it. In Dumont’s aesthetics, large-scale events are conjured through their synecdoches: an enemy’s war horse drifting aimlessly into the woods echoes a triumph in the battlefield; the sinuous, dizzying choreographies of a group of knights evoke clashes in dressage-like performances. Whether or not out of budgetary constraints (a subject Dumont has always spoken very candidly about), this frugal shot composition conjures poetic imagery of simplicity, where everything comes down to the triad of human, divine and nature, and the rugged immensity of the latter participates in trumpeting the glory of the Creator.

Still, however closer to old Dumont Joan of Arc may be than its predecessor, it remains a work of perturbing inventiveness, and credit for this goes to its 10-year-old lead. If Jeannette left one baffled for Dumont’s stylistic choices, his casting stunt here is no less daring. While in Locarno, the French maverick said Joan of Arc had been originally envisaged with Jeannette’s Jean Voisin as martyr, but the actress–who in Jeannette served as teenage Maid of Orleans–manifested several concerns with the role, and the collaboration fizzled out. It was a blessing in disguise. By having 10-year-old Prudhomme play a soon-to-be martyr seven years younger than the real-life Joan actually was, not only does Dumont enroll the youngest ever actress to step in the saint’s shoes (dethroning 19-year-old Jean Seberg as seen in Otto Preminger’s 1957 Saint Joan): he also narrows the gap between myth and audience in unexpected, engrossing ways.

Watching Prudhomme address church elders and senior army folks, a clunky armor protecting a 10-year-old girl concurrently fighting against a foreign army and a calcified Church, is a dissonance that allows Dumont to both stir empathy for an unjustly executed child (as the adults around Joan pointedly keep calling her), and also underscore her bravery as she confronts the grownups she’s up against. And in a last segment that unfolds as an endless theological debate, Prudhomme’s mix of child-like vulnerability and courage offers some solace from the otherwise dry, extended elucubrations. While Joan of Arc may well be unlikely to earn Dumont new acolytes (and more likely to leave even the most fervent of devotees puzzled for some of the more discussions-heavy segments) it achieves the miraculous feat of poking at the dogmatism of religious institution, while celebrating faith in all its mysterious, obscure powers.

Joan of Arc premiered at Cannes Film Festival and is now playing in Virtual Cinemas.