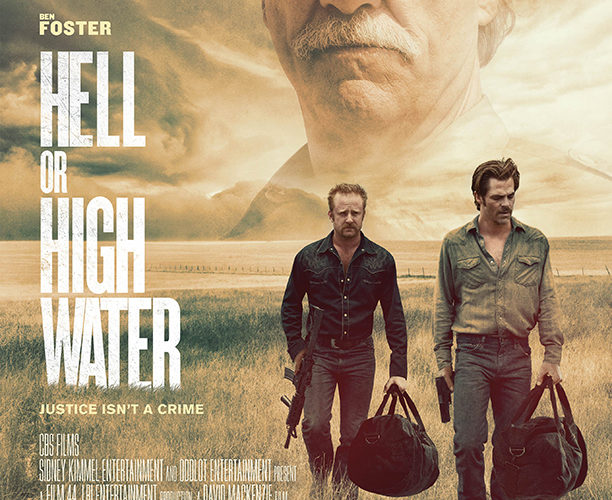 David McKenzie’s Hell or High Water is a gritty, darkly humorous, and fiendishly violent neo-western. Or, in other words, the type of film you might expect from a non-American director working in the United States. It borrows heavily from the Coen brothers and Cormac McCarthy, but it does so very well, thanks largely to a terrific script from Taylor Sheridan, the red-hot actor-turned-screenwriter who broke onto the scene last year with Sicario. It might usher in a new chapter of the Cambridge-born director’s career having come back strong in 2013 directing an inspired Jack O’Connell in Starred Up. Indeed, this relocation to the States should go some way to explaining an enjoyably plastic impression of West Texas, where T-bone steaks are served only medium rare and people say things like, “Sideways don’t wanna meet me. Unless it wants to find itself at the short end of a long street.” Or something like that.

Chris Pine and Ben Foster are two brothers with a mortgage to pay (Hell or High Water is also a film with foreclosures on the mind). In order to do so they’re donning masks and holding up banks in the West Texan back roads. Their game is to hit the establishments early in the day when no customers are around and bury the getaway car after. Pine plays the younger brother Toby, a textbook good-bad man. Foster plays Tanner, the more volatile of the two and the stupider one, as well.

Hot on their case are state troopers Marcus and Alberto, played by Jeff Bridges and Gil Birmingham, respectively. Bridges’ Marcus is kind and wise but never short of a dry, sardonic comment; a clear descendent of Tommy Lee Jones’ sheriff Bell in No Country for Old Men. Tanner and Toby have found a way to launder their takings by buying and cashing in chips in various casinos (the filmmakers showing little-to-no regard for those establishments’ formidable security protocols), but there are always cracks in the plan. Toby’s pet-the-dog moment comes when he leaves a $200 tip for a pleasant diner waitress (a classic decent-criminal lapse in judgment) and Tanner always seems liable to fly off the handle. Shit soon connects with fan.

There is much to enjoy here. Sheridan takes a far lighter touch than in Sicario with plenty of entertaining, very non-PC riffing between Bridges and the Native American Birmingham. Cinematographer Giles Nuttgens keeps the grittiness at bay and Nick Cave and Warren Ellis provide a characteristically jangly guitar score. McKenzie’s newfound interest in violence also looks great on this larger canvas, but the film fails to explain either Tanner or Toby’s complete disregard for human life. Their beef is with the bankers we’re told, but Tanner gives no thought to knocking off some of the littler guys.

This one-percenter angle tastes a little underbaked, it must be said, especially when the viewer considers how the film rewards the sort of one-man vigilantism that got the country into this mess in the first place. These are unfortunate and quite lazy exceptions in an otherwise riveting and uproarious genre outing.

Hell or High Water premiered at the Cannes Film Festival and will be released by CBS Films on August 12. See our festival coverage below.