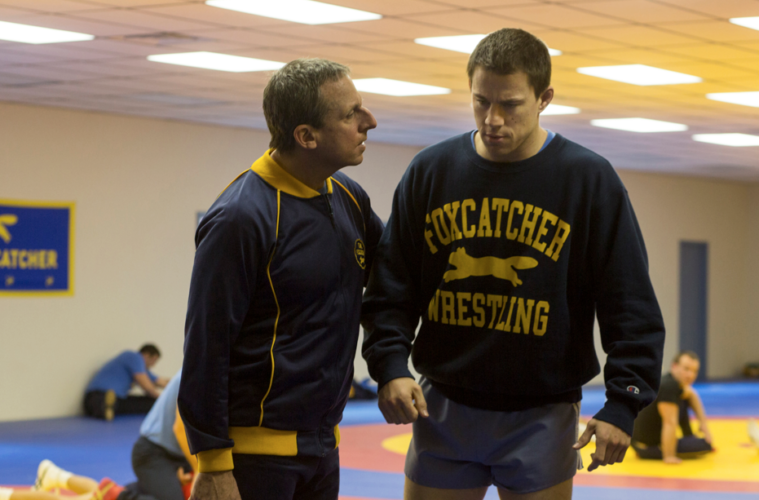 There is an unspoken emptiness that hangs boldly over Foxcatcher, which is sure to be one of the subtly darkest films made by a major Hollywood studio this year. The film’s Pennsylvania ranch initially appears like a gorgeous emblem of American society, sparkling with the country’s ideological symbols of majestic plains, galloping horses, and sizable, but not elegant, mansions. But there also seems to be a totalitarianism hanging over these as well, a kind that makes one second guess the images presented onscreen. The dread that sits over Bennett Miller’s superbly directed, bleakly dystopic view of American life is palatable in every moment without ever feeling overwhelming, simply sitting in the empty spaces that separate the physical bodies. Miller is a director of these spaces — spaces that have been hollowed out, leaving characters to need to sit, look, and think, as we often see with Channing Tatum’s Mark Schultz. Mark desires something, but never has the words to articulate it.

It’s a tricky line that the director of Capote and Moneyball must balance here — a film that could be overblown with melodrama at any moment, but these motivations and desires are impressively sublimated. Based on a true story (but one that shouldn’t be looked up; this one deserves a tabula rasa approach), Foxcatcher begins on the body of Mark, fighting against a training dummy in a darkened wrestling room. Schultz, along with his brother, David (played by America’s great treasure Mark Ruffalo), are both Olympic winners in the sport from 1984, and have begun their training process for the 1987 World Champions and 1988 Olympics. But while David is well-respected, a good teacher, and enjoys a life with his family, Mark is defined by his emptiness. Tatum quietly sulks his body when he’s outside the ring, an introverted personality searching for something to fill a void of respect.

The answers come when he receives an invitation to Foxcatcher Ranch, the grounds of America’s wealthiest family, at the behest of John du Pont. du Pont is quiet, leaving subtle pauses between each phrase, and looks deathly ill in the withering body of Steve Carrell, brutally menacing without ever once raising his voice. What du Pont has that Mark lacks is a vision — he speaks of the Soviet menace, the need for role models in America that represent freedom and strength, and, of course, the willingness to give Mark a blank check to come to the fully equipped ranch to begin training. Imbued with ideology — but, more than that, a mentor that believes he may be the real champion — Mark gladly accepts the offer, and thus begins training and learning from his billionaire mentor / father.

Foxcatcher threatens to fall apart at any moment — it’s a film that could rely on a simple explanation or big moment to create a centerpiece that defines the film, but instead Miller lets the drama slide out so effusively without ever once forcing a card. Using the true story to his advantage, Miller instead relies on the physical body. It helps that the sport is not just a physical one, but one built on calculated and essentially intensely awkward gestures. This timing gives Miller the moments to capture intense jolts which become reflective in the film’s editing patterns. The shock cuts — notably the first to a dramatically changed Tatum — are so briefly noted that they only register psychologically instead of melodramatically.

This is to say, Foxcatcher confirms that Miller is, without a doubt, a true descendant of Clint Eastwood in his emphasis on classical cinema techniques to articulate his narrative. The intense shadows of Greig Fraser’s cinematography give each room a physical, arid feeling with a sense of emptiness always hanging over Mark, and an intense intimacy that he feels when cared for by his brother, Dave. It is only du Pont’s relationship with his mother (a quiet performance by Vanessa Redgrave) that is given too much clarity and simplification, the kind of character that sits as an easy solution to John’s motivation, just “spoken” a little too much.

The performances by Tatum, Carrell, and Ruffalo build on each other in ways that feel lived-in and authentic, bringing a clarity to these motivations without ever once making a case for why these characters need to make each action. The psychological motivations are exact and clear through Miller’s framing of men sitting on a couch, the use of a door, or an unfocused presence in the foreground of the shot that invades the space of another. This is as classic as classic Hollywood gets, but without the banality that has invaded contemporary Hollywood cinema. That Foxcatcher thus becomes a darkened view of the American dream, using one of the country’s most effectively exported aesthetics to critique the same, is why the film will quietly disturb audiences without telling them why.

Foxcatcher premiered at Cannes Film Festival and will open on November 14th via Sony Pictures Classics.