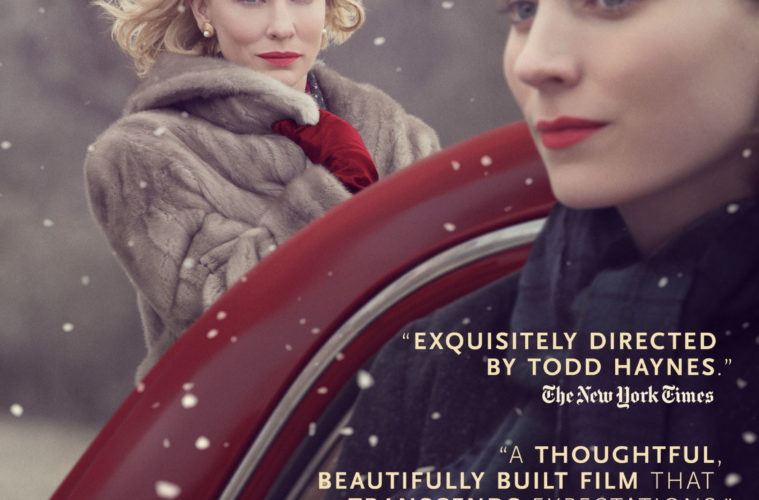 To be an actress and land a leading role in a Todd Haynes film must be a dream come true. With Safe, Far From Heaven, and his five-part miniseries Mildred Pierce, Haynes has proven himself to be one of the very few male directors not only interested in but capable of endowing women protagonists with genuine and far-reaching complexity. In doing so, the performances he’s drawn from his actresses – Julianne Moore in the first two titles and Kate Winslet in the lattermost – have been amongst the very finest of their careers. These virtues are again masterfully exhibited in Carol, his sublime adaptation of Patricia Highsmith’s 1952 novel The Price of Salt.

Cate Blanchett plays the titular Carol, a wealthy married woman and mother of one living in 1950s New York. Blanchett had stolen the show in Haynes’ I’m Not There, in which her incarnation of Bob Dylan eclipsed that of her five co-leads. Although she reaches equal heights here in a radically different role, she is perfectly matched by Rooney Mara as Therese, a young department store clerk who is swept into her first lesbian romance by Carol.

On their first date, when the characters are introduced to each other following a short exchange at the department store, the chemistry between them is electrifying, and this early scene already displays the extreme sophistication of their performances. Carol, wearing a lavish ensemble and immaculate make-up, is in sharp contrast to the demure Therese in her unassuming store-clerk get-up. In lesser hands, they would have engaged in a strictly dichotomous dynamic, with the experienced and assertive older woman enticing the young ingénue into her world. While Carol certainly attempts to play that role, minute indications of self-doubt pierce through her façade of self-confidence. Correspondingly, Therese may be in awe of Carol and entering unknown territory, but Carol’s hesitance hasn’t escaped her notice and she clearly relishes its underlying meaning.

Over the course of their blossoming relationship, the balance doesn’t so much shift as grow more elaborate, and the nuances in their characters remain the film’s primary focus. In portraying a homosexual relationship in the 1950s, Haynes isn’t interested in overt commentary. The specificities of the era in this regard are incorporated but always as a means of fleshing-out the protagonists. For instance, Carol’s husband’s (Kyle Chandler) attempts at keeping full custody of their daughter in their divorce on the basis of a “morality clause” serves to foster Carol’s fortitude and advance her in the consolidation of her identity.

On the other hand, the aesthetics of the era are as central as the characters. Once again working with Edward Lachman, his regular DP since Far From Heaven, Haynes has realized a period piece of exceptional beauty. Shot in grainy Super 16 mm and using a color palette heavily indebted to the paintings of Edward Hopper, each frame is sumptuous and overflowing. Both the costume and production designs are extraordinary, and whenever the film enters a new room or the characters don another outfit, it’s a delight to scrutinize every inch of Lachman’s deep focus compositions and try and take in the abundance of exquisite detail.

Carol has some obvious narrative parallels to Abdellatif Kechiche’s undeserved Palme d’Or winner Blue is the Warmest Color. Though the similarities between the two films are largely superficial, it is nevertheless worth comparing the directors’ respective approach to their material to better appreciate the extent of Haynes’ achievement. Unlike the arch-arrogant Kechiche, Haynes doesn’t claim supreme authority on the psychology of his protagonists. His film is not motivated by a didactic, revelatory ambition, but by sincere and respectful curiosity. In Carol, by consistently observing his heroines through windows streaked by reflections, dust or raindrops, he acknowledges that there will always be a separation between his camera and the reality of the women he portrays. Paradoxically, this allows him to get a whole lot closer than Kechiche’s invasive extreme close-ups.

Carol premiered at Cannes Film Festival and will be released on November 20th. See our complete coverage below.