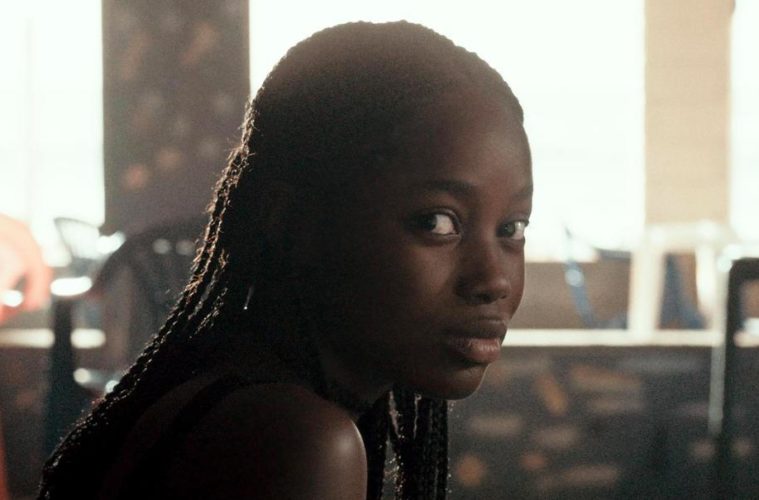 Somewhere along the stretch of Senegalese coastline where Mati Diop’s feature-length directorial debut Atlantics takes place, a futuristic tower stands tall and spectral above the ocean–a sinister crossbreed between a stalagmite and a lighthouse, its lights thrusting red and warm blobs into the night. It’s a fictional place in a story of magical, mysterious elements–a love story that crisscrosses between social commentaries and ghastly apparitions, addressing the global migrant crisis through a language of disquieting and stunning reveries.

A few hundred meters below the skyscraper’s summit, hordes of the Senegalese laborers who’ve helped to build it fight for three months of overdue salary. One of them is Suleiman (Ibrahima Traoré), a twenty-something struggling to make ends meet under the blistering sun. But Atlantics is not about him, and just when Mati Diop’s Cannes Grand Prix winner seems to embark on a tale of labor exploitation akin to João Dumans and Affonso Uchoa’s 2017 Araby, the youngster jumps on a boat and disappears at sea, and the focus shifts to the lover who waits for him back home, the young Ada (Mama Sané).

Pitted against an ever-growing filmography that’s turned to the refugee crisis to chronicle the Odyssey-like journey of migrants stranded at sea (think of Gianfranco Rosi’s 2016 Golden Bear Fire at Sea, or Moussa Touré’s own Senegalese take, 2012’s The Pirogue), Atlantics feels like an eye-opening outlier. It is a tale of people leaving, but seen and told by those left behind. It is a film of absence–in the sense that the sheer might of the crisis is flashed out and dissected through the holes it carves into the social fabric. And it understands the plight of refugees as a phenomenon with complex gender and class dimensions. Based on a documentary short by the same name which Diop directed in 2009 (and which, much like Touré’s Un Certain Regard contender, followed a group of men who attempted a life-threatening boat crossing en route to Europe) Atlantics does not unfold as a chronicle of a journey, but reduces it to a plot catalyst, as the focus shifts to the matriarchal world that’s left to reckon with the men’s departure–and loss.

It’s a mourning Ada cannot afford to make public. Long before Suleiman’s disappearance, she was promised to affluent Omar (Babacar Sylla), a Senegalese who seems to spend half a year doing business in Europe, and the other half loitering in Dakar’s most luxurious hangouts, lavishing the bride-to-be with riches that exert no particular reaction on her part (and certainly not the dumbfounded awe they provoke in her friends, who warn the broken-hearted to be grateful for all the opulence, and move on). “Times are tough, hold on to that place” is a leitmotiv that echoes all throughout Diop and Olivier Demangel’s script, and the lesson they peddle–that the refugee crisis is not everyone’s to suffer–may well be one of Atlantics’ strongest assets. The juxtaposition between a world of underprivileged people forced to embark on a journey of self-immolation and the pristine, gold-lacquered universe of those who need not risk it makes for some strident contrasts. But this is a dichotomy that functions as a corollary to Diop’s first feature, not its main concern.

For Atlantics is a tale of rhizomatic subplots. Once an unknown arsonist sets fire to Ada and Omar’s garish new bed–while newlyweds and wedding attendees are busy celebrating in the other room–Atlantics splinters into a detective subplot and a ghost story. Just who exactly may be behind the attack–and whether that someone may or may not be related to Suleiman’s own crew–is the mystery upon which Diop anchors Atlantics’ second half. Not all subplots function as effectively, though. Where the images of Ada’s fellow widows roaming around empty streets and clubs as if possessed by their lovers’ memories make for some scenes of spellbinding beauty (their eerie seductiveness accentuated by Claire Mathon’s shadows- and neon-heavy cinematography as much as composer Fatima Al Qadiri’s chords), the policier, down to its denouement, is a far more fragile and distracting detour from richer fields.

Still, however patchy the narrative scaffolding may sometimes feel, however many the anfractuous subplots, where Atlantics stalls in plot, it makes up in mood. Claire Denis’ connoisseurs will relish in the parallels between Diop’s filmmaking and the cinematic universe of the French auteur who brought the 36-year-old under the spotlight as lead actress in her 2008 film 35 Shots of Rum. But the analogies between Diop and Denis’ filmmaking only hold up to a point. Sure, much like Denis’ own works, this one is a film of rituals, a film that relishes in capturing everyday small gestures. It is a story that pivots on a few crucial places around which characters hover as if trapped in a magnetic field (watching the disco balls draw flickering constellations over Ada’s face as she fritters time away at a beachside disco, I was jolted back to Denis Lavant’s deranged soldier dancing his nights away in aching solitude in Beau Travail). But Diop speaks her own language–and Atlantics’ is one of seductive, confounding beauty. This is a story that treats its unspeakable tragedy as such: a world-shattering crisis told not through conventional storytelling, but conjured up from the realm of dreams, nightmares, and visions. A reverie as perturbing and hypnotic as the sea that washes it ashore.

Atlantics premiered at Cannes Film Festival and opens on November 15 in theaters and on November 29 on Netflix.