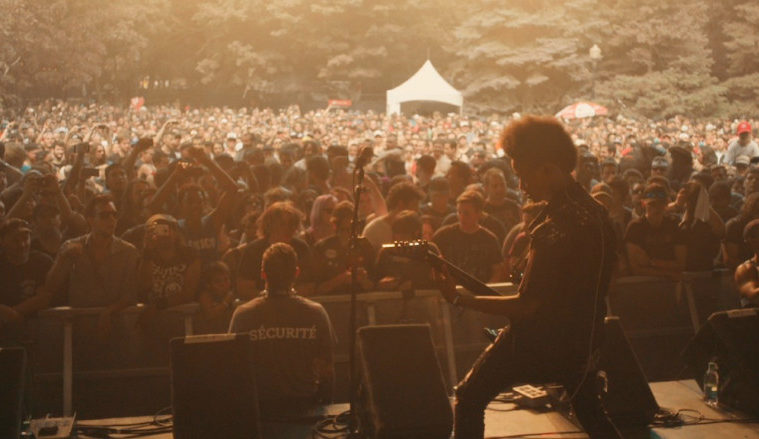 Following in the vein of We are the Best! and Sing Street, this summer brings another movie about youngsters expressing themselves through music, and turning out to be quite good at it. The only difference with Breaking a Monster is that it’s a true story and its been captured in documentary form thanks to director Luke Meyer.

The film, which has screened at many festivals, including SXSW, Hot Docs and BAMCinemaFest, tracks the rise of Unlocking the Truth, a band comprised of then-7th graders who started out in Times Square playing to crowds and have risen to fame, opening for Metallica and nabbing a $1.8 million record deal with Sony. Ahead of a release later this June, well-timed with the debut of their first album, the first trailer has now landed. Check it out below, along with the poster.

BREAKING A MONSTER begins as the three members of band UNLOCKING THE TRUTH are all in 7th grade, spending their weekends playing a blend of heavy metal and speed punk in Times Square – often drawing substantial crowds. They take on a manager: a 70- year-old industry veteran. With his guidance they are soon on their way to a 1.8 million dollar record deal and a precarious initiation into the music industry.

Anything feels possible, and in some moments the band can almost feel the eyes of the world gazing upon them. The boys are coming of age, not only as they make the leap to being professional musicians, but also as they transcend childhood and take their first steps into the complexities of adulthood. The accelerated breakout of any band, let alone one of pre-teens, is an extremely narrow and specific period in time – BREAKING A MONSTER is the story of this rapid transformation.

Breaking a Monster opens on June 24 and expands throughout July.