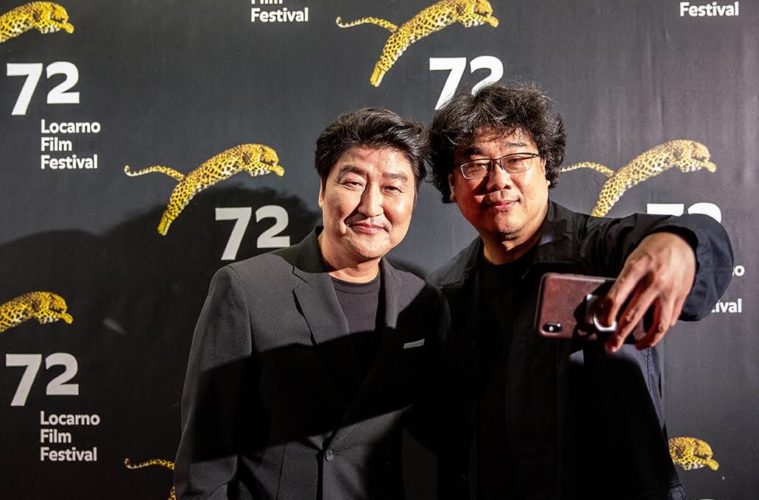 In a recent, some might say premature, list of the top 100 films of the decade, South Korean master filmmaker Bong Joon-ho’s latest Parasite, starring his regular collaborator Song Kang-ho, placed 48. It had premiered at Cannes just two months earlier.

Recency bias can help as much as it can hinder, especially in polls such as these that tend to reflect better on films that have already stood some test of time. The fact that Parasite has resonated so rapidly with audiences and critics, its brilliance almost a given, speaks to the diamond-cutter perfection of Bong’s screenplay and the riotous, gripping manner in which he and his team have executed it.  Bong was awarded the Palme d’Or in Cannes for his efforts, becoming the first South Korean filmmaker to do so.

The director and star landed at the Locarno film festival to present a screening of Parasite and, last Monday, the festival awarded Song with its Excellency award. We found them in an understandably amiable mood.

The Film Stage: Congratulations on winning the Palme d’Or. What is the significance of awards like these, and of being the first Korean filmmaker to do so?

Bong: Coincidentally it’s the 100th anniversary of Korean cinema this year, so when we won the prize it was incredibly dramatic. Personally, I’m trying not to make it dramatic as much as possible for me and to just work in my usual way with my usual flow–a very measured way of working–and continue my working process.

Song: It’s an incredibly big prize that I didn’t expect. It’s incredibly valuable for us and the Korean audiences to feel a sense of pride in Korean cinema and a sense of achievement, and I don’t think there’s anything more rewarding than that.

Where do you see yourself in the Korean cinema?

Bong: It’s not easy for me to say that for myself, with my own mouth. What you’re asking needs to come from someone outside the work who will be able to see it much more clearly and objectively. In terms of this film, and of course in terms of genre, it’s entertaining. The brilliant actors have a very vibrant energy that appeals to audiences and these things can really help. At the same time the film has very dark elements. It’s showing in a very clear way the gap between the wealthy and the poor. That can be very uncomfortable for audiences to watch, I think. So it was very unexpected that it did so well at the box office because the audience might find that difficult to stay with, so I’m very grateful that it’s done so well.

It’s different from your two previous films, which included English-language characters, and very different atmospheres. Are there aspects that you like to repeat in your films or do you always want to express something different?

There is a very strange mix of darkness and comedy. There’s violence and everything, but at the same time we laugh. How do you mix the two so well?

Bong: My wife says: “That’s just your personality, it’s just so weird and that’s why your films are like that.” Normally my personality is a bit split–that’s what she says. I think for me, to have two hours of just dark tragedy or two hours of just comedy is actually more difficult and more weird, because real life isn’t like that. Real life is a mixture of both. Even when we’re going through very terrifying things there are always unexpected pockets of comedy that we can find. And because for me life and reality is like that, that’s just naturally expressed in my films. I think also it comes due to working with actors who have similar tendencies like this. For example, actor Song, he is really able to express very well the complex and multi-layered aspects of life in order for the films to have this unique tone in the end.

You’ve made four films together at this stage, what is your opinion of one another?

Bong: I’m going to specifically discuss a very limited example to answer that question. When I was writing the script for Parasite there was a point that I was very concerned about and thought a lot on. In the latter half of the film there is a climax. In order to avoid spoilers I won’t say in detail what that is, but during the climactic point there is this one moment, and while I was writing it I was really concerned whether I could persuade the audience in this moment. However, because in this scene actor Song would be playing it I could write it with confidence and I did. If it was another actor I don’t think I could have written it in this way but with him I trusted that he could persuade the audience and he did, which I’m very thankful for.

So as a creator, director, and scriptwriter—the meaning of having an actor you can rely on in this way, it really made me think of this again. In a way it could be very irresponsible as a director, what I did, but with this part I thought I would rely entirely on his talent, being able to portray this.

Song: So it’s been almost 20 years that we’ve worked together–precisely 18. It’s a very long time that we’ve worked together. And also lived together in Korea as both people working in film. For me the most surprising aspect of Bong Joon-ho as an artist is that the end point for him is not the pursuit of cinematic pleasure, but through the cinematic pleasure that you conversely then reflect on life. And I think that was always surprising for audiences and that’s why they like his work so much.

You also made four films with Park Chan-wook, what is the difference when working with these two directors?

Song: I did three feature films and one short with director Park so, yes, four films. He has a very intense, unique creative world and he is loved by audiences and fans, and he is very representative of Korean cinema and he is incredibly different from director Bong Joon-ho. So as an actor, for me it is very happy but also very challenging to work in this way. That the directors are so aware of their own artistic worlds and pursue that, for me as an actor, how I can express this as closely as possible is always a challenge and always homework and always a little bit lacking. So it’s a very difficult but also a very happy dilemma to have as an actor.

(To Bong Joon-ho) Are there many filmmakers that have influenced you?

Bong: My mentor is a Korean master from the 1960s and ‘70s; his name is Kim Ki-young, who made The Housemaid. He is really a genius. He depicts class and sexual desire within Korean society very well. I also like Claude Chabrol’s crime films. I also like Kiyoshi Kurosawa’s horror films and I heard that this year he has the closing film at Locarno.

What do you think about the idea that there is a secret dialogue between your films and several films of Lee Chang-dong? Memories of Murder and Peppermint Candy; Mother and Poetry; and now Parasite and Burning.

Actually, when I was making Memories of Murder I was inspired by some aspects from Peppermint Candy, the description of the detectives in the movie… also, in the case of Poetry, Mother was released one year before so I don’t know if Lee Chang-dong inspired me or not. In the case of Parasite and Burning, while Burning was being shown at Cannes we were filming Parasite so it was only after we finished filming that we were able to watch Burning. In Burning you have these very wealthy and poor characters as well. At the same time having these very similar themes, our approach is very different. To share this with director Lee, whom I very much respect, is a very fascinating point for me.

You could almost include Shoplifters or Jordan Peele’s Us in that conversation.

Bong: Similarly with Shoplifters, I watched that after filming Parasite. During the filming I’d heard that he had won at Cannes, Kore-eda Hirokazu, and I was very pleased for him. I know him very well and I thought that Shoplifters dealt with characters that are outside the conventional Japanese society system and in a very interesting and unusual way.

Jordan Peele’s Us I haven’t watched yet but there was a moment in the trailer that I found very interesting. There is an image of the Rorschach–in fact the title for Parasite originally was [Rorschach]–referring to this, with the underlying meaning of the wealthy and the poor, two families reflecting on each other, and when I saw that at the ending of the trailer of Us I became very curious about it. So I’ve been telling everyone around me who watched the film: “Don’t tell me anything and don’t spoil anything for me.” But I’ve heard a little bit so I know a little bit already.

Parasite screened at Locarno Film Festival and opens on October 11.

This interview was conducted in English and Korean, via an interpreter.