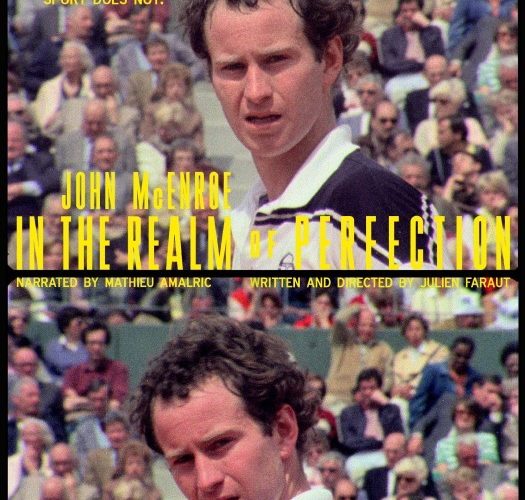 Berlin Review: ‘In the Realm of Perfection’ Links the Beauty of Cinema and Tennis

From the years 1973 to 1981 the great film critic Serge Daney held the position of editor of Cahiers du cinéma, that most revered and storied of film journals. He also wrote a tennis column. That idea of a shared symbiotic passion for the worlds of cinema and sport—and how the two might be connected—provides the basis for Julien Faraut’s experimental documentary In the Realm of Perfection, a witty and contagiously impassioned ethnographical study of the game and, in particular, the 1985 finals at Roland Garros.

The story goes that Faraut was working in the archives of the National Sport Institute in Paris when he discovered a pile of film reels from the documentarian Gil de Kermadec. Apparently, the institute had begun making instructional 16mm films in the 1980s, each focusing on the methods of a particular tennis star of the day. In 1985 the subject was John McEnroe.

Indeed, it is a film very much about that volatile legend but it’s bookended with a quote from his namesake, the similarly antagonistic Jean-Luc Godard who, in an interview with l’Equipe, once uttered the immortal words: “Sport tells the truth, cinema doesn’t.” Faraut sets out to find that truth but also to show how tennis, or how we consume it at least, is in itself cinematic. Gil certainly shot it as such using multiple angles, close-ups, slow motion, and even makeshift clapper boards. Faraut makes the point that however we choose to view it, it’s the sport itself that provides what we hope to see at the movies: drama, triumph, anguish, heroes, villains, a story arc, and so on.

It is a convincing argument, one bolstered in no small way by the aesthetic beauty that the burnt orange clay of Rolland Garros (in a far greater way than the grass of Wimbledon or the floodlit hard courts of Melbourne or New York) has to offer, not least for the fact that it’s the only surface in grand slam tennis on which the players can glide. One of the fascinating things to watch is a simple 45-degree angle shot, taken from the net line, that would, on television, cut to the opponent and back again as the ball changed sides. Here Faraut lingers on his subject to show the work put in for each point and the resulting array of human emotion is astonishing. The play takes on the drama of an opera.

This sense of the baroque is heightened to no small degree by Faraut’s choice of audio which ranges from Sonic Youth (used brilliantly to back a slow-motion serve at the film’s opening) to Mozart to the theme from The Godfather to snippets of Robert De Niro’s lines from Raging Bull. You might be able to guess exactly when the director chooses to utilize that particular dialogue.

Perfection is also a film about the thing that has immortalized McEnroe more than any of his achievements in the game, what has proved to be his legacy in many ways: “the eternal injustice that he, and only he, is a victim of,” as described by Denay. In the days before the addition of Hawkeye, players would simply stand and berate umpires for minutes on end about whether or not a ball was out. In this field McEnroe was peerless, and Faraut—keenly aware of the drama and absurdity of those moments–indulges his film with no shortage of these petulant displays. The director makes the claim that while this behavior was often a means to buy time or frustrate an opponent it was also the result of a fierce perfectionism.

We are allowed to witness that perfectionism put to the test in the film’s final twenty minutes as we’re shown a blow by blow account of that year’s remarkable final. De Kermadec’s case study lined out against the powerful Ivan Lendl and if you (as I did) happen to not know what went down that day under the Parisian sun I recommend you forego the urge to research until seeing this outstanding documentary. Like Douglas Gordan’s somewhat more austere Zidane: A 21st Century Portrait, In The Realm of Perfection is in essence about that most slippery of topics: the beauty of the game. Sport might tell the truth, but perhaps only cinema can capture it.

In The Realm of Perfection premiered at the Berlin International Film Festival and opens on August 24.