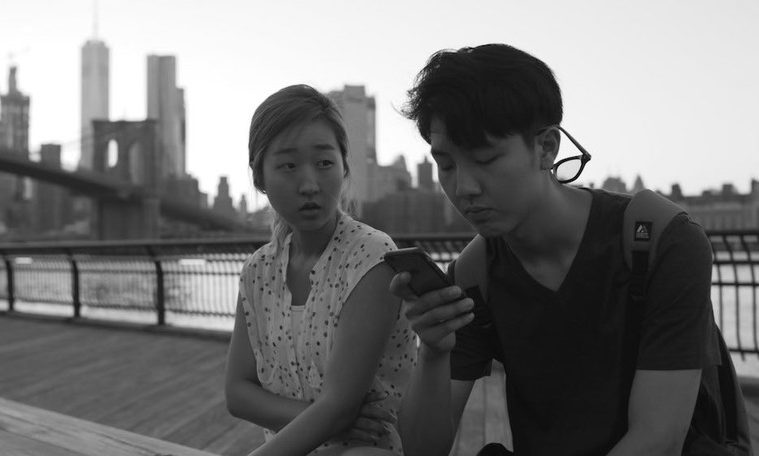 BAMcinemaFest Review: ‘Sunrise/Sunset’ Gazes on NYC as a Foreign Metropolis

The story of filmmaking in New York City is incomplete without consideration of the foreign-language films that are regularly made here. Such films—off the top of my head, I’m thinking of at least a dozen Bollywood spectaculars and Tamil dramas, and many Chinatown pictures, including Hong Kong films like Stanley Kwan’s Full Moon in New York (1989), Peter Chan’s Comrades: Almost a Love Story (1996) and gangster movies like Tongs: A Chinatown Story (1986), as well as Ang Lee’s The Wedding Banquet (1993), made in Mandarin-speaking Flushing with Taiwanese funding—can offer an insider’s view of the many ethnic enclaves in our polyglot city, or an outsider’s view of the place we call home. Sunrise/Sunset is an American film, the debut effort of an American filmmaker, Jong Ougie Pak. Yet the movie, which is almost entirely in Korean, feels of a piece with movies that gaze on New York as a foreign metropolis, with an exoticizing remove and a feeling of being lost in translation. It skims along the surface of the city the way its aimless young protagonist—a college-age Korean man visiting his long-distance maybe-girlfriend during her studies in the US—skims along the surface of his own life.

Having failed his university entrance exams again, Min Suk (Kwangmin Lee) arrives in NYC at the height of summer, jetlagged, his time as unstructured as his wardrobe (shorts, dry-fit polo, sunglasses on the back of the head). He’s visiting Yeon Jae (Woohyun Kim), spending time with her between her classes and staying with her in the bland, luxe, short-term 1BR near Lincoln Center where she’s temporarily living—and where the sleeping arrangements, different each night, reveal the uncertain status of their relationship. As she shows him the city, and he wanders around without her, Min Suk’s voiceover hits first-impression notes which are amusing less for their directness than for their familiarity, unbeknownst to him: The subway is disgusting but the diversity is incredible; Times Square is disappointing; he doesn’t understand why they had to wait in line an hour for hamburgers (he doesn’t say “Shake Shack”), but they turned out to be pretty good.

When Min Suk, who has been dully ambivalent about his future plans, announces his decision to continue his studies in New York—he’s thinking Columbia—Yeon Jae rewards his sudden surge of ambition by joining him in bed, and so begins an out-of-towner rhapsody: Fifth Avenue, hot dog carts, Central Park, the time of Min Suk’s life “with my girlfriend in New York.” But he’s never heard of the SATs—the “entrance exam” all over again—and his grimace deepens as he slogs and then skims through test-prep books at a Barnes & Noble, facing up once again to the difficulty of the work, the uncertainty of the outcome, and his insecurity about his and Yeon Jae’s diverging trajectories. The two turn on each other. He snipes passive-aggressively at her when she makes a rookie mistake about gallery hours, or stays out late at an event he’s not invited to, and she thinks aloud about “a break,” that cursed phrase with which young women discovering their talents gently let down their loser high school boyfriends.

As Min Suk spends practically his whole time in New York City in a bubble, speaking to the one person he knows from home (or looking at his phone), the smallness of the movie’s scale works in its favor. Pak makes use of public-domain piano music (Satie etc) for the soundtrack, and the cinematography is in black-and-white—a transparent but successful attempt to make a “real movie” out of two actors in normal clothes sitting or standing very close to a digital camera in a small apartment or public space (possibly with a permit, possibly not). It feels almost like watching someone’s Instagram Stories—down to iconic New York City shots lifted from Once Upon a Time in America (1984) and Manhattan (1979), which cinephile tourists can and do replicate the same way Pak does. Sticking mostly to spots you only go when you have family in from out of town, like the High Line and Brooklyn Bridge, the movie offers Min Suk just a glimpse of another life, an alternate reality for himself—one which he, like the movie, has only limited resources to perceive. (The film’s matching of form to content is harmonious, though some scenes are functional to a degree flatter than what budgetary limitation would seem to demand.) Only as the film goes along does Min Suk begin to appreciate what we’ve known all along—what a small, unrepresentative sample of New York City he’s experienced, how separate he is from his surroundings, how temporary he looks, taking selfies in Washington Square Park; and how characteristically casual, how vague and unserious, his thought of moving to another country his—how reinvention doesn’t mean total freedom, a vacation, but a dedicated, fearful process involving all the things Yeon Jae is doing when he’s not around: Hitting the books, making new friends, looking for a long-term living situation. The trappings of an entire new life, assembled through even more effort than the old one.

And here is the thing—the film is aligned throughout with Min Suk, affectingly limning the anxieties of a young man coming of age, or not, by coming to terms, or not, with his fear that he might turn out to be lazy, unexceptional, with an acute fear of failure and no follow-through. Which is fine, as far as that goes, but it could go farther. The film is around 45 minutes long, split roughly equally between scenes of Min Suk alone and of Min Suk and Yeon Jae together. It’s not difficult to imagine how Sunrise/Sunset could be expanded to a brisk feature length—or how that new material could broaden or deepen its perspective on New York.

Sunrise/Sunset premieres at BAMcinemaFest on June 18.