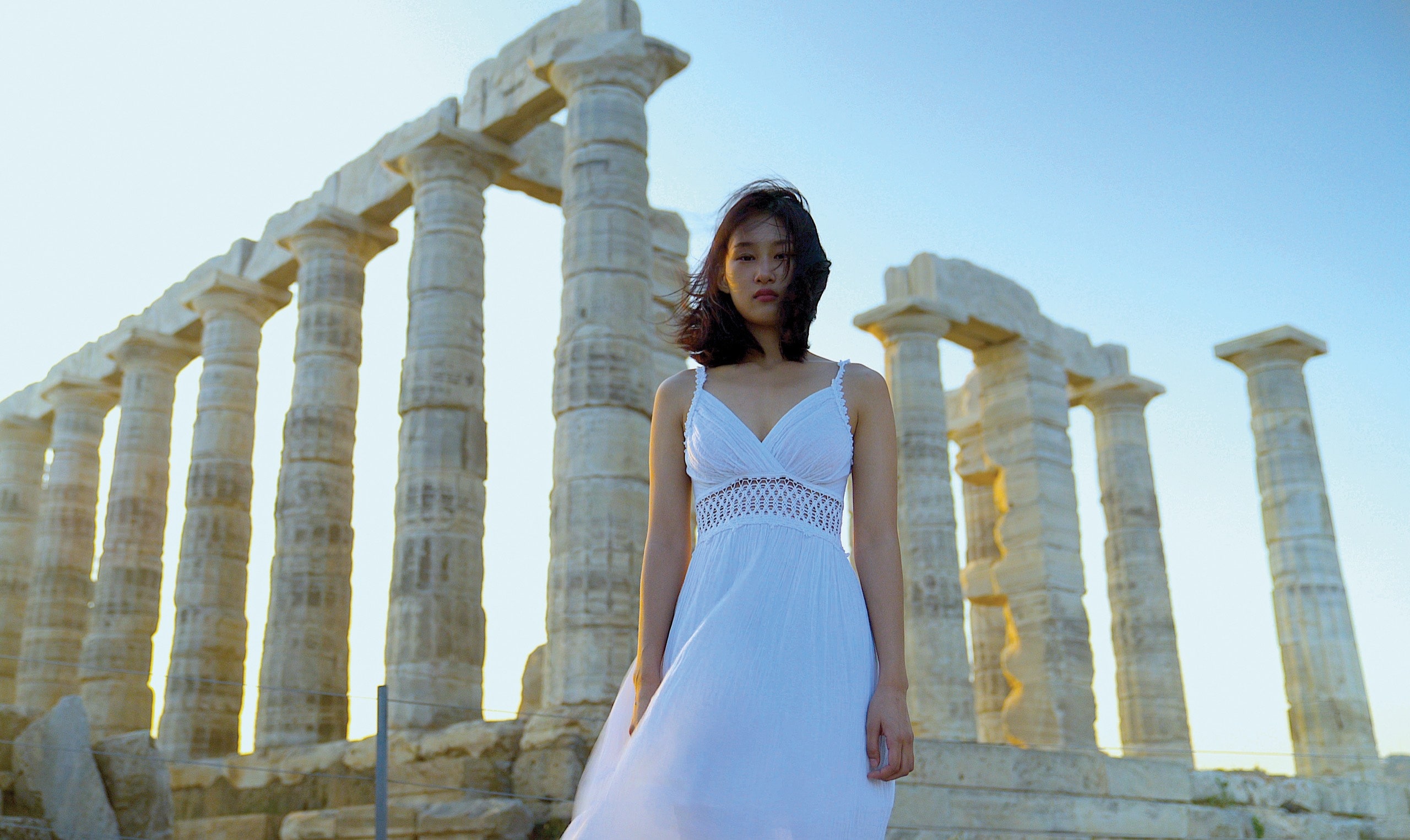 Greek tragedy echos through the modern-day Korean #MeToo movement in Ougie Pak’s Clytaemnestra. Made on the fly at an acting workshop in Greece, the film follows an actress as she struggles with the text of Agamemnon and against her domineering director, exploring power dynamics and the artistic process. Though very slight indeed, the film plays a bit like a more on-the-nose version of one of Hong Sang-soo’s sequentially shot explorations of sexist microaggressions and meta-cinematic reflexivity.

Hye Bin (Haru Kim) arrives in Athens with her hard-shell wheelie suitcase to begin rehearsals with a director played by Jongman Kim, an actor who in fact invited Pak to come to Greece and make a movie out of a two-week acting workshop he was leading there. Flying out with just a cinematographer and a production coordinator, and shooting on a Canon C100 “since it was the free camera available to us” (per his Director’s Statement), Pak outlined the story as a series of semi-improvised scenes to shoot each day.

The scenes, which follow the Agamemnon rehearsal process as the cast switch roles and read the script off their smartphones, are essentially status exercises. Puffy, sanguine, and always on, Jongman Kim gives the film’s most external performance—he’s commanding, and the tone is set early on when the director asks his cast for their impressions of the text, then breaks the first rule of improv by pushing back on every one of their interpretations. His method of directing seems to consist primarily of barking exhortations (“Energy!” “Intention!” “Teamwork!”) like an old-school gymnastics coach, soliciting negative feedback after every run-through, and leading his cast in call-and-response vows to do it better next time.

His performance grants the inexperienced young actors in his workshop an excuse to give more tentative, reactive performances, in which they’re always processing and thinking through their responses. The dynamic is appropriate for a play about the limits of patriarchal authority; the parallels between life and art deepen when, just as Agamennon returned to Mycenae with Cassandra, the director undermines his lead Hye Bin by importing a new actress. As palace intrigue ensues and the director’s abuses of Hye Bin escalate, the similarities with Aeschylus’s saga of justice and vengeance become, as in Greek tragedy, inevitable.

Pak’s previous film, Sunrise/Sunset, was a medium-length (45-minute) feature that also concerned itself with Koreans abroad; in that case, New York, and which likewise cast a light sheen of fiction over a documentary of its own making. Pak films with small cameras in the same kind of temporary accommodations as his cast stays in, and takes permitless trips to tourist spots where the apartness and moody interiority of his cast evoke the in-betweenness of travel.

Here, he makes some use of his locations—a trip to the Acropolis and Theatre of Dionysus; a voiceover set to a montage of Aegean coast pickups—but is unable to generate much frisson from shots of his cast just walking around the ruins with the other tourists. He stays mostly within the rented house, with its underfurnished living room and terrace, and you get to know the space well, feel the rhythm of the days there, the way actors sit out at night decompressing and drinking cans of Fix Hellas. There are occasional visual improvisations to add texture and structure to the material, like a recurring nightmare of Hye Bin’s in which a POV shot roves through the house. (You can feel the camera operator’s footsteps in the way the frame shakes—and catch his reflection in the mirror.) But even at 70 minutes, the film feels padded; the dramatic beats are repetitive and the improv frequently feels forced. The search for the truth of the moment doesn’t always translate well to on-screen action; Haru Kim probably got more than we’re getting out of the scenes of Hye Bin on her bed in an Airbnb, looking aimlessly at her phone.

If Clytaemnestra is more interesting as process than as product, it nevertheless confirms Pak as a resourceful filmmaker with an appealingly loose touch, one interested in massaging the putty of everyday life into some kind of shape. The film’s presentation at BAMcinemaFest reaffirms the festival’s commitment to filmmakers as they work through their means and methods; it’s good to have it back.

Clytaemnestra is now playing virtually at BAMcinemaFest through June 29.