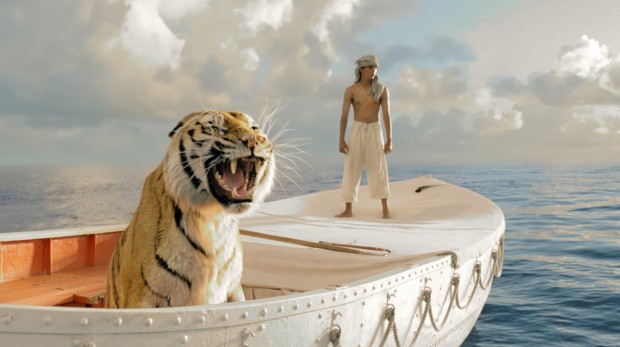 It seems as though the fall festivals are going grander this year, with Rian Johnson‘s sci-fi drama Looper set to open Toronto, and now we have the Film Society of Lincoln Center announcing that Ang Lee‘s big-budget adaptation of Life of Pi will open their 50th New York Film Festival. We learned at the end of last week that Paramount’s Flight would take the closing slot, so it seems that this festival will be book-ended by two of fall’s major features.

It also marks one of the few times in the last decade where the opening film will actually be a world premiere, with last year’s Carnage already bowing at Venice. Only time will tell if Life of Pi repeat The Social Network level success, with that NYFF opener going on for major awards play, but it’s a promising first step for Lee’s latest. One can see the press release below as we wait for a full line-up, and view the trailer here if you missed it.

New York, NY, August 13, 2012 – The Film Society of Lincoln Center announced today that Ang Lee’s LIFE OF PI will make its World Premiere as the Opening Night Gala presentation for the upcoming 50th New York Film Festival (September 28 – October 14). The screening will mark the Academy Award-winning director’s return to NYFF, 12 years after CROUCHING TIGER, HIDDEN DRAGON served as the Closing Night Gala presentation (2000). The selection of LIFE OF PI also allows Lee to join Robert Altman, Pedro Almodóvar and François Truffaut as the only directors to have had more than one film chosen to open NYFF. (THE ICE STORM was the Opening Night Gala selection in 1997.)

A respected presence at the New York Film Festival and the Film Society of Lincoln Center, in 2009 FSLC celebrated Lee’s career with a complete retrospective of the director’s work at the Walter Reade Theater. The LIFE OF PI screening will also mark the first time a film has been presented in 3D for NYFF’s Opening Night Gala.

Among the films that have been selected for the prestigious Opening Night Gala slot over the course of NYFF’s 50-year history include Luis Buñuel’s THE EXTERMINATING ANGEL (1963), Gillo Pontecorvo’s THE BATTLE OF ALGIERS (1967), Akira Kurosawa’s RAN (1985), Pedro Almodóvar’s WOMEN ON THE VERGE OF A NERVOUS BREAKDOWN (1988) Quentin Tarantino’s PULP FICTION (1994), Mike Leigh’s SECRETS & LIES (1996), Stephen Frears’s THE QUEEN (2006) and David Fincher’s THE SOCIAL NETWORK (2010) (complete list below).

“LIFE OF PI is a perfect combination of technological innovation and a strong artistic vision. Ang Lee has managed to make a deeply moving, engrossing work that will delight audiences as much as it will astonish them. We’re enormously proud to have this film for our Opening Night for the 50th NYFF,” says Richard Peña, Selection Committee Chair & Program Director, The Film Society of Lincoln Center.

Based on the book that has sold more than seven million copies and spent years on the bestseller list, Academy Award winner Lee’s LIFE OF PI takes place over three continents, two oceans, many years, and a wide world of imagination. Lee’s vision, coupled with game-changing technological breakthroughs, has turned a story long thought un-filmable into a totally original cinematic event and the first truly international all-audience motion picture. LIFE OF PI follows a young man who survives a disaster at sea and is hurtled into an epic journey of adventure and discovery. While marooned on a lifeboat, he forms an amazing and unexpected connection with the ship¹s only other survivor…a fearsome Bengal tiger. The Twentieth Century Fox release is due in theaters on November 21, 2012.

Regarding his return to NYFF, Ang Lee said, “I am both delighted and honored to be back at the New York Film Festival with LIFE OF PI. I have the deepest respect for Richard Peña and his team and to be selected by them as the Opening Night Film for the 50th Anniversary is extremely gratifying. I am also excited because this is my hometown, and to be unveiling this film that I am so proud of here is a real pleasure.”

Rose Kuo, Executive Director, The Film Society of Lincoln Center, added, “Ang Lee has shown us his mastery of intimate psychological drama as well as epic action-adventure and we are thrilled to welcome him back to the New York Film Festival with an exciting film that displays of all his talent.”

General Public tickets will be available September 9th. There will be an advance ticketing opportunity for Film Society of Lincoln Center Patrons and Members prior to that date. For more information visit www.Filmlinc.com/NYFF or call 212 875 5601.