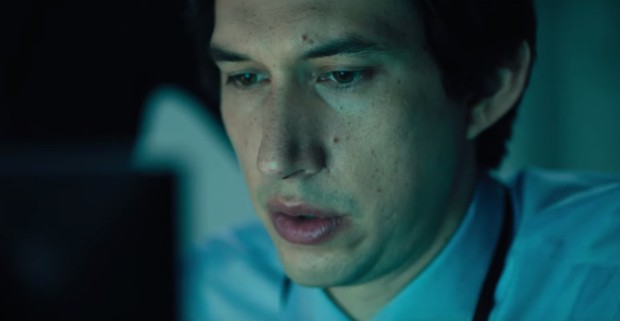 Frequent Steven Soderbergh collaborator Scott Z. Burns made a splash at Sundance this year with The Report, which stars Adam Driver as he leads an investigation to uncover post-9/11 torture methods covered up by both the Bush and Obama administrations. Set for a limited release on November 15 followed by an Amazon Prime debut on November 29, the thrilling first trailer has now arrived.

I said in my review, “Structured in the vein of Spotlight and The Post, but certainly more engaging than the latter, the only home life we hear about is what those involved have given up to dedicate their life in this search for justice. This is a drama almost entirely made of up conversations in corridors, government offices, and the isolated basement facility that Jones and his small team made their discoveries. Within those limits, it’s a feat just how riveting Burns makes the proceedings, which have a clearly delineated timeline as if the writer-director put as much investigative care into the particulars as Jones did.”

Also starring Annette Bening, Ted Levine, Michael C. Hall, Tim Blake Nelson, Corey Stoll, Maura Tierney, and Jon Hamm, see the first trailer below for the movie that made our list of the 50 must-see films of the fall.

The Report is a riveting thriller based on actual events. Idealistic staffer Daniel J. Jones (Adam Driver) is tasked by his boss Senator Dianne Feinstein (Annette Bening) to lead an investigation of the CIA’s Detention and Interrogation Program, which was created in the aftermath of 9/11. Jones’ relentless pursuit of the truth leads to explosive findings that uncover the lengths to which the nation’s top intelligence agency went to destroy evidence, subvert the law, and hide a brutal secret from the American public.