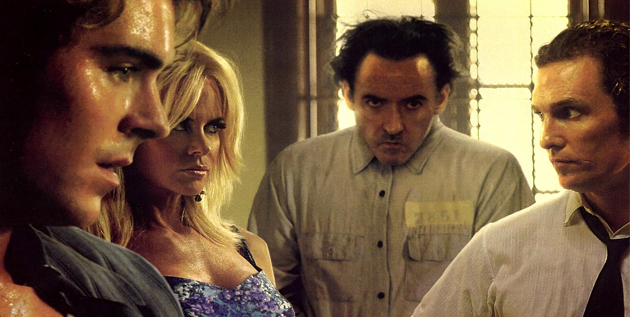 5 Films To Watch Before Seeing ‘The Paperboy’ Despite getting a bit of a thrashing after its Cannes premiere, one thing is for certain — Lee Daniels‘ The Paperboy is something that needs to be seen to be believed. We posited the swarmy, Southern-set crime drama has “all the trappings of a cult classic” in our review and this week, it will finally be hitting theaters. Bringing together Zac Efron, Matthew McConaughey, Nicole Kidman and John Cusack, we’ve rounded up a handful of films that will help you get prepared for all this “hot, strange, sloppy mess of a film.” Look below for our five recommendations to watch before The Paperboy.

When it comes to bizarre, sleazy Southern-set dramas that are on their way to cult classic status, Craig Brewer‘s story of a sex addict trapped by a God-fearing man is in the upper echelon. Dripping with a sultry mood, in part thanks to a perfectly orchestrated blues soundtrack, Black Snake Moan successfully tackles a handful of moral issues, guided by stellar performances from both Samuel L. Jackson and Christina Ricci. – Jordan R.

While The Paperboy star Matthew McConaughey recently kicked off a flurry of acclaimed roles — including Killer Joe, which certainly deserves a mention in this rundown — the actor’s best work was a small, twisty independent drama directed by none other than Bill Paxton. More frightening than most horror films, this crime drama sees a father’s vision from God carried out by his family in murderous ways. – Jordan R.

Whether or not the camp in Lee Daniels‘ film ultimately proves successful, there’s little chance it leaves a more scarring impression than this Werner Herzog documentary. Into the Abyss devotes most of its runtime to two inmates on death row in Southern prisons — hence the more obvious connection — while, occasionally, shifting focus toward the loved ones who were killed by the men in question; there’s even a look at those who do the lethal injection. It can be a harsh experience, but Herzog is able to, even temporarily, alleviate all that misery and horror with the sort of humanism which marks the best of his work. Into the Abyss may even stand amongst that. – Nick N.

The Paperboy will likely be far down in the list of the best Florida-set crime-related dramas when all is said and done, but we can certainly recommend the best. With a hurricane looming, John Huston‘s Key Largo sees a group of gangsters, hotel owners and a war veteran uncover a mystery amongst their claustrophobic environment. Featuring the last time that spouses Humphrey Bogart and Lauren Bacall acted together, this noir seethes with tension. – Jordan R.

Midnight in the Garden of Good and Evil (Clint Eastwood, 1997)

Clint Eastwood’s 1997 adaptation of John Berendt’s best-selling book follows John Kelso (John Cusack), a freelance New York writer sent to Savannah, GA to report on the lavish Christmas party of Jim Williams (Kevin Spacey). What starts as a casual flirtation as Kelso accepts the southern hospitality of his eccentric hosts, ends in the murder of the town’s number one gigolo (played by Jude Law). Midnight in the Garden of Good and Evil is as ambitious and mysterious as its title suggestions. Running a bit long at 155 minutes, its overabundance of characters is made up by a fascinating, charming crime mystery featuring Irma P. Hall, Alison Eastwood, Bob Gunton and ‘Lady Chablis’ in brilliant supporting roles. – John F.

What films would you watch with The Paperboy?