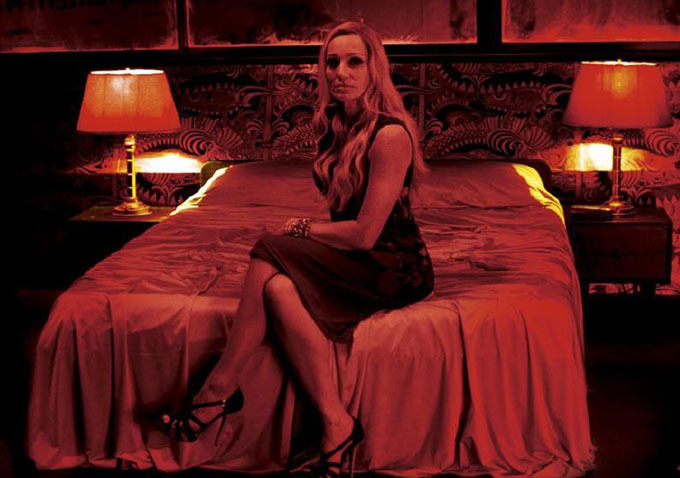 Although he plans to take a hiatus from acting Ryan Gosling is as busy as ever. Coming off press tours for Gangster Squad and The Place Beyond the Pines the actor is currently shooting his directorial debut How to Catch a Monster and now the crew has some extra motivation on set; according to Deadline, Warner Bros. has picked up the film to distribute for a likely 2014 release.

While it will finalize at the Cannes Film Festival, the studio has grabbed the fantasy film that stars Saoirse Ronan, Christina Hendricks, Eva Mendes, Matt Smith, Ben Mendelsohn and Rob Zabrecky. Following a single mom who heads into an underwater town to find her missing daughter, the style reportedly has some Lynchian qualities to it. And if you haven’t got enough of Gosling’s other 2013 film, Only God Forgives, before it premieres this summer, ahead of its Cannes bow we’ve got some new photos and posters below, as well as Nicolas Winding Refn‘s official statement. Check out everything below.

The original concept for the film was to make a movie about a man who wants to fight God. That is, of course, a very vast obstacle but when I was writing the film, I was going through some very existential times in my life – we were expecting our second child and it was a difficult pregnancy – and the idea of having a character who wants to fight God without knowing why very much appealed to me.

With that as the concept, I elaborated by adding a character who believes he is God (Chang), obviously the antagonist, with the protagonist being a gangster who is looking for religion to believe in (Julian). This itself is, of course, very existential because faith is based on the need for a higher answer but most of the time, we don’t know what the question is. When the answer comes, then, we must backtrack our lives in order to find the question. In this way, the film is conceived as an answer, with the question revealed at the end.

With hindsight, I am able to see the similarities between Chang and One Eye in Valhalla Rising, and Driver in Drive – all are rooted in fairytale mythology and have difficulties living in the everyday world. I can see that technically, there is a resemblance in their stoic behavior, silence, and fetishistic portraits even though they live in different times and are portrayed by different actors. In Valhalla Rising, One Eye is enigmatic – we don’t know his past but he is defined by his name. In Drive, Driver is defined by his function. And in Only God Forgives, Chang is first of all defined by his enigmatic behaviour, to such an extent that he becomes a disembodied character, an ‘it’, defined not by his name but solely by his image.

In a way, Only God Forgives is like an accumulation of all the films I’ve made so far. I think I was heading toward a creative collision, full speed ahead, in order to change everything around me and to see what would come after. I have always said that I set out to make films about women but I end up making films about violent men. Now that everything is colliding, it may end up turning things upside-down for me. This collision is exciting because everything around me becomes so uncertain and we must not forget that the second enemy of creativity, after having ‘good taste’, is being safe.