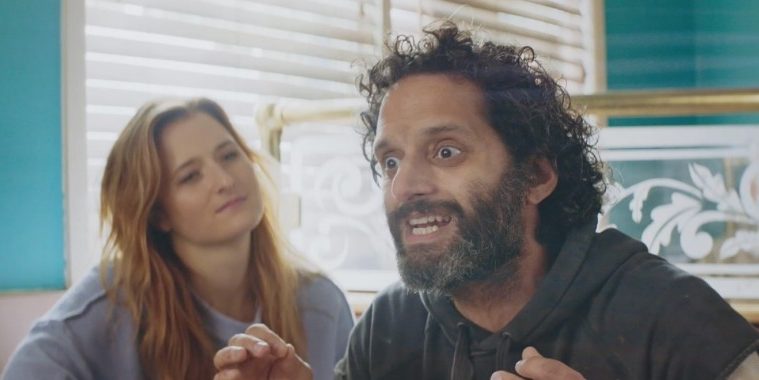 Watch: Jason Mantzoukas on The Rolling Stones vs. The Beatles in Exclusive Clip from ‘The Long Dumb Road’

The manic, anarchic charm of Jason Mantzoukas is on full display in The Long Dumb Road, Hannah Fidell’s latest feature, which follows his character alongside Tony Revolori’s Nat on a road trip to Los Angeles. While the comedian is usually utilized for quick bursts of energy in various comedies, Fidell gives him a genuine arc and proves his leading man potential.

After premiering at Sundance, the comedy will arrive in theaters this week and we’re pleased to present an exclusive clip in which Mantzoukas’ drifter character Richard has many thoughts on The Rolling Stones. In Dan Mecca’s review, he said Mantzoukas steals the show and “his ability to find the humor in almost every moment is a true gift,” as displayed in this clip.

Also starring Taissa Farmiga, Grace Gummer, Casey Wilson, and Ron Livingston, check out our exclusive clip and the trailer below.

From writer-director Hannah Fidell (A Teacher, 6 Years) and co-writer Carson D. Mell (“Silicon Valley,” “Tarantula”) comes a comedy of transformation, discovery and maturity set on the road between Austin and Los Angeles. When college-bound teenager Nat (Tony Revolori) offers itinerant 30-something mechanic Richard (Jason Mantzoukas) a ride during a stop-over in small-town Texas, neither one realizes the indelible impact each traveler will have on his respective journey.

Nat, an aspiring photographer, is heading towards a bright future in art school in Los Angeles and wants to find the real America en route to new beginnings out West; Richard, a lovably unkempt motormouth, is simply looking for connection in the moment – and maybe a beer or ten – while he grapples with indecision, past mistakes and dead-ends. As they travel through the American Southwest, taking in picturesque towns and crossing paths with an assortment of old flames, fellow travelers, kooky cons, and Good Samaritans, both passengers come alive through the myriad possibilities of the open road. Finding connection, comfort and chaos in their shared journey, this improbable and unforgettable screen duo forges an epic bond few will forget.