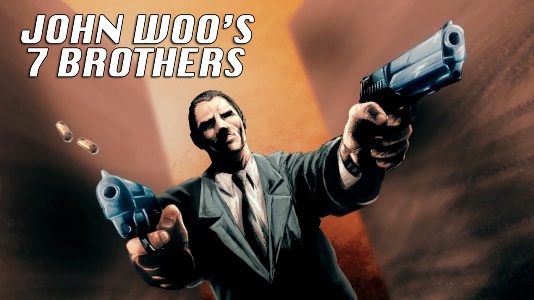 Along with mastering the art of filming slow motion shoot-outs and flying doves, director John Woo can add two more skills to his resume.

The move to graphic novels and animation is appropriate for Woo, whose movies (Face-Off, Mission Impossible 2) always seemed to verge on the cartoonish. If his approach to the project is any indication, the change in media suits him. For Seven Brothers, he retooled a Chinese folk tale by fusing mythology with contemporary elements. Set in modern day Los Angeles, an ancient prophecy must be fulfilled as seven men face their destinies and the Son of Hell to save the world.

“The original ‘Seven Brothers’ graphic novel, and this new animated comic book series, takes the seed of an idea I had about famous Chinese folklore to a whole new level. It creates a modern, global story, and an art form that is unique and yet, clearly, a brother to the film medium,” said Woo in an official statement.

Besides Woo, Liquid Comics has worked or is currently working with other film talents in the production of original graphic novels, including Guy Ritchie, Edward Burns, Nicolas Cage, Wes Craven and Barry Sonnenfeld. Seven Brothers is the first in a new line of animated web shows the company plans to create, giving actors and directors the chance to release the comic book nerd in all of them. Check out the first four episodes below.

Are web series the next step for big directors? Or is this just a phase?