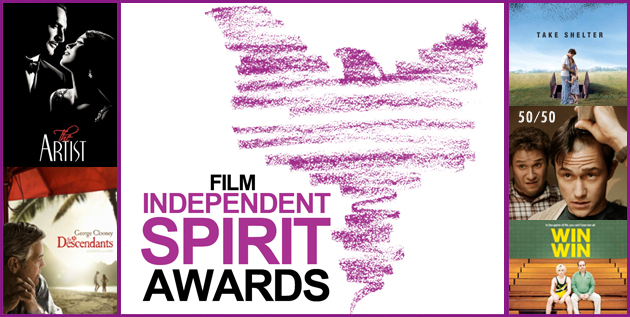 Each week within this column Spirit Award voter & film critic Kristy Puchko  will offer a keen insight on a new selection of nominees for the 2012 Spirit Awards, along with any garnered behind the scenes exclusives. The Spirit Awards will air February 25th @10PM on IFC.

Last week I confronted some of this year’s nominee controversies and explored the validity of “snub” accusations. This week, we’ll dive in by discussing some of the better-known titles in this year’s Spirit race, including the two films tied for the most nominations this year: the gritty psychological thriller Take Shelter and the whimsical silent sensation The Artist.

The Artist ~ Directed by Michel Hazanavicius

Admittedly one of my favorite films of 2011, the silent stunner The Artist is full of cinematic splendor, as you may have guessed from the massive critical praise the film has received along with nominations in some of Spirit’s most prestigious categories. Set in the Hollywood during the early age of talkies, this inspired romance from French spoof-maker Michel Hazanavicius manages to tell a delicate yet deep tale of love without a word. While there’s plenty here to cheer, the most thrilling aspect of The Artist may be it’s wildly charismatic leading man, Jean Dujardin, who should prove stiff competition against more established indie stars in the Male Lead category.

Writer-director Jeff Nichols’ follow-up to his Spirit-nominated debut Shotgun Stories reunites him with his wild-eyed leading man Michael Shannon, best-known for his Oscar-nominated role as the disturbed young man in Sam Mendes’ suburbia-set tragedy Revolutionary Road. Shannon returns to the wild zone outside sanity as a man who believes he’s experiencing visions of the end of the world, but may just be going mad. Filled with an anxiety-ridden atmosphere and chilling imagery, this gripping drama builds to an enigmatic finale that left me breathless. But the best element of Take Shelter is the interwoven performances of Shannon and his co-star and fellow nominee, breakthrough ingénue Jessica Chastain. Together they paint a believable and poignant portrait of a marriage facing serious trouble.

The Descendants ~ Directed by Alexander Payne

As I am an ardent admirer of Alexander Payne’s six-time Spirit Award-winner Sideways, The Descendants was one of my most anticipated films at the New York Film Festival this year. And while many at the packed press screening chuckled throughout Payne’s darkly comic adaptation of Kaui Hart Hemmings’ heralded novel, I–to be perfectly frank–was often bored. For one thing, I didn’t buy ladies’ man George Clooney–who some felt was snubbed in the Male Lead category–as a schlubby dad, and thought his portrayal of a cuckolded father seeking to meet his dying wife’s lover rang false and profoundly so. For me, the saving grace of this deeply angry comedy were supporting players Shailene Woodley, who offered a surprisingly poignant and mature portrayal of an angst-ridden teen girl of privilege, and Judy Greer, who shamefully hasn’t garnered any singular award attention for her brief but heart-rending performance as a wife and mother betrayed. They each gave me someone to connect to, but sadly both were sidelined by a paunchy rich man’s self-pity.

Based on the real-life experiences of its screenwriter, 50/50 centers on a young man forced to face his own mortality after discovering he has cancer. Former Spirit Award nominee Joseph Gordon-Levitt turns in a powerful performance, and I’m admittedly surprised it didn’t score him his second Spirit nod. He shined in scenes of rage, grief and sincere bromance (opposite 2012 Spirit Awards host Seth Rogen.) Still, it’s good to see supporting player Anjelica Huston earned a nomination for her alternately heartbreaking and hilarious performance as JG-L’s mom, whose immediate response to the news her son has cancer is, “I’m moving in.” This line elicits laughs partially because of its implied defiance. As if her maternal care and plenty of chicken soup will save her son. It’s a moment that is both heartwarming and gut-wrenching, all thanks to Huston’s impeccable performance. [My full review]

Actor turned writer-director Thomas McCarthy, who previously created such compelling, Spirit Award-winning dramas as The Station Agent and The Visitor, delivers once again with this complicated and inspiring tale of marriage, friendship, and parenthood. Paul Giamatti and Amy Ryan co-star as a married couple who decide to take a troubled teen into their home. Like McCarthy’s past efforts Win Win radiates with a warmth and humanity while tackling troubling topics. He has a deft directorial hand that’s made him one of my favorite modern writer-directors, as his stories are deceptively simple, engrossing, bittersweet and yet wildly funny. I’m sad to see this fantastic feature only scored a screenplay nod, especially as the entire cast from veterans like Giamatti, Ryan and Bobby Canavale to newcomer Alex Shaffer were thoroughly wonderful. [My Full Review] [Interview with Shaffer]

State of Mind: Feeling inspired. While these films take on some deeply dark topics (death, betrayal, the end of the world), most are filled with a sharp sense of humor that urges its audience to focus on the bright side of life, a personal philosophy I wholeheartedly connect to. More than that, there’s some truly extraordinary cinema in this batch, which makes it easy to feel exuberant.