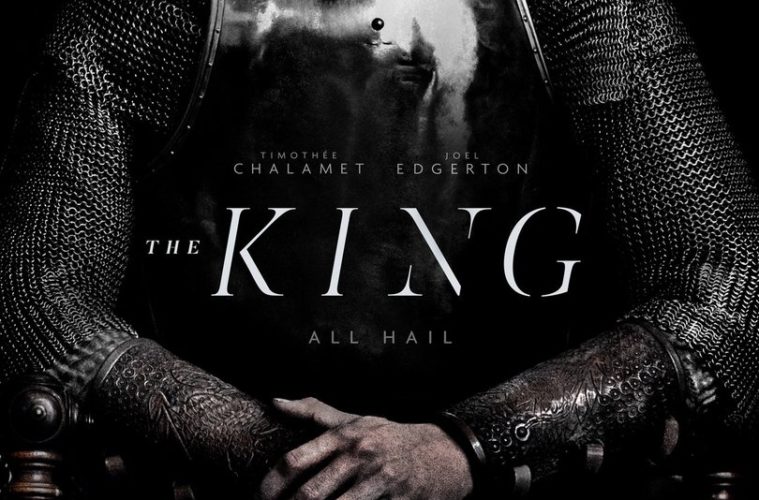 Oh, for a muse of bowl-cut hair that would ascend / The brightest heaven of invention!

A newly groomed Timothée Chalamet stars as Henry V in David Michôd’s latest film The King, a post-modern, mud-and-guts reworking of William Shakespeare’s trilogy of plays on the reluctant ruler. As indebted to the mood and visual language of Game of Thrones as it is to the Bard’s texts, Michôd provides finely worked entertainment with a compelling and significant central performance from Chalamet–who frankly hasn’t had to carry a film in quite this way before.

The director adapted the script with the help of his fellow countryman and frequent collaborator Joel Edgerton. The Australian actor also costars here as the boozy, gregarious Falstaff in a performance that echoes Orson Welles’ take on the same character in Chimes at Midnight but later shifts away from the source material and into something more reminiscent of Little John in Robin Hood. The story takes us from just before the death of Henry’s father, Henry IV (Ben Mendelsohn), up to the battle of Agincourt and shortly after. Michôd and Edgerton keep the dialogue in a rough and playful lambic pentameter, peppering it with enough anachronistic profanity to keep it feeling fresh and surprising without undermining the cogency of the world that’s they’ve created–a gritty but oddly beautiful imagining of 15th century England brought to life by Adam Arkapaw, the cinematographer responsible for the similarly moody landscapes of True Detective season 1 and Top of the Lake.

The director’s career has been patchy to say the least and he has struggled to repeat the early success of Animal Kingdom, his 2010 debut–a crime movie that is perhaps better remembered for Jacki Weaver’s performance and for announcing Ben Mendelsohn to the world than for any feats of direction. Reactions were underwhelming for his dystopian outback film The Rover and even less kind for the Brad Pitt starrer War Machine in 2017. The King marks a return to form, a sharply directed period action film with a fine central performance from Chalamet as the wayward prince turned reluctant ruler. Chalamet holds court impressively: somehow less believable in the opening exchanges as an impetuous prince but growing in confidence and intensity as the film progresses. Fans of Dune–in which Chalamet is set to play yet another destined prince–should take note. Audiences should also get used to the way Michôd presents his action sequences–which are coherent and perfectly chaotic, and clearly the offspring of Miguel Sapochnik, the director who helmed some of the biggest episodes from the final seasons of Game of Thrones.

Given everything that’s happening in the world, it’s debatable if such a folksy, heroic fable about Britain and the royal family is something we need right now. However surely unintentional, it is not difficult to imagine a world in which Chalamet’s handsome, honorable young king is co-opted by certain less desirable sections of the internet. It doesn’t help that the enemy here, namely France, is portrayed with such animosity and frankly vague jingoism. The son of the Daphine, for instance, is played with considerable camp by Robert Pattinson. The actor chooses to not speak French in a film in which a not-unremarkable amount of French is spoken–not least by Chalamet, an actor of French extraction, which makes you wonder if their roles might have been switched were the film released a few years ago. Pattinson’s attempts to rectify this by using an affectatious French accent are amicable enough but they are played for rather questionable laughs.

None of which is helped by the story’s inherent nationalism. In the most glaring instance, Chalamet gets to do a rousing pre-battle speech that will surely warm the hearts of many a Brexiteer–think Viggo in Return of The King or Gibson in Braveheart. Michôd only draws attention to this, and mostly remedies it, in the final act–during which we are treated to an excellent cameo from Lily Rose-Depp as Catherine of Valois. Still, it is difficult to shake the feeling of cake being eaten and had. Even still, The King is a decent ride.

The King premiered at Venice Film Festival and hits theaters on October 11 and Netflix on November 1.