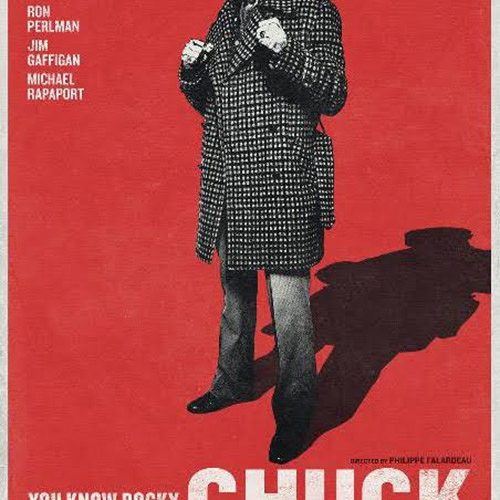 Chuck looks a bit familiar. A film of browns and greens; disco music and ‘70s rock tunes; big haircuts and even bigger lapels. Indeed, in a way reminiscent of recent period efforts such as Black Mass and David O. Russell’s last two outings, Chuck is drenched in that particular decade’s elaborate trappings. It also owes a lot to the school of Scorsese, complete with wise-guy narration, east-coast working-class lilts, and a sense of “You gotta be shitting me! Is this really my life?” But it’s a sports film at heart and a rather good one at that, all plucky underdog right hooks and tragic, humiliating falls. In a way, it’s also a film about movies, too. Coming from decorated Québécois filmmaker Philippe Falardeau, it is the true life story of Chuck “The Bayonne Bleeder” Wepner, the man who fought Muhammed Ali after the champ’s victory in the Rumble in the Jungle, and later the main influence for a certain film by Sylvester Stallone.

Donning the sideburns and prosthetics this time around is Liev Schreiber, an actor in the ascendency, no doubt, having managed to impress with a relatively small role amongst far louder performances in Spotlight. Here, Schreiber shows the other end of his acting spectrum: an ability to take the gloves off and grasp the role with tremendous character and dexterity. He immerses himself in Wepner, a working-class Jersey native from a Polish family who learned how to take a hit. We meet Wepner first as an older, washed-up fighter, taking on Victor the Wrestling Bear from Clint Eastwood’s Paint Your Wagon in a dive club in Bayonne. The screenplay (from documentary maker Jeff Feuerzeig and comedy TV writer Jerry Stahl) has Schreiber lead us through the events that brought Wepner down: firstly making a name for himself in his locale; then taking on Ali in the Richfield Coliseum in ‘75, the fight that will later inspire a young Stallone to make Rocky. The rise, the fame, the cocaine, and so forth and so on. A radiant (as ever) Elisabeth Moss backs him up as the boxer’s long-suffering wife Phyliss, the Adrianne to his Balboa. Moss and Schreiber are wonderful together. Falardeau shows the fighter’s softer side and asks his audience to root for their marriage, even as Wepner slips into egotism, booze, and one-night stands. Naomi Watts appears as a no-nonsense bar maid who rolls her eyes and mops up the mess when things inevitably go awry. Ron Perlman looks sufficiently bee-stung to play long time coach Al Braverman, and is a welcome presence as always. Falardeau and cinematographer Nicolas Bolduc don’t do a huge amount to radically alter the aforementioned ‘70s pop-culture fetishization that has become ubiquitous of late — most recently in Scorsese’s own doomed HBO vehicle Vinyl — but they do the familiar stuff perfectly well, and Bolduc’s handheld camera allows them to fluidly incorporate real news footage and fight photography throughout. While never quite thrilling, the fight scenes are choreographed in a serviceable fashion.

Interestingly, and unlike most sports movie story arcs, Wepner’s boxing career peaks in the film’s first act. The real knockout blows come much later, as the champ encounters Stallone, Hollywood, and a pseudo identity crisis. This can probably be best described as a Liev Schreiber movie — it is a lead performance in every sense of the word — although it’s still interesting to see Falardeau shifting from the subtle drama of Monsieur Lazhar to this far grittier fare. Chuck isn’t attempting to reinvent any wheels, but it is consistently gripping — slick as a skip rope and just one hell of a story.

Chuck premiered at the 2016 Venice Film Festival and opens on May 5.