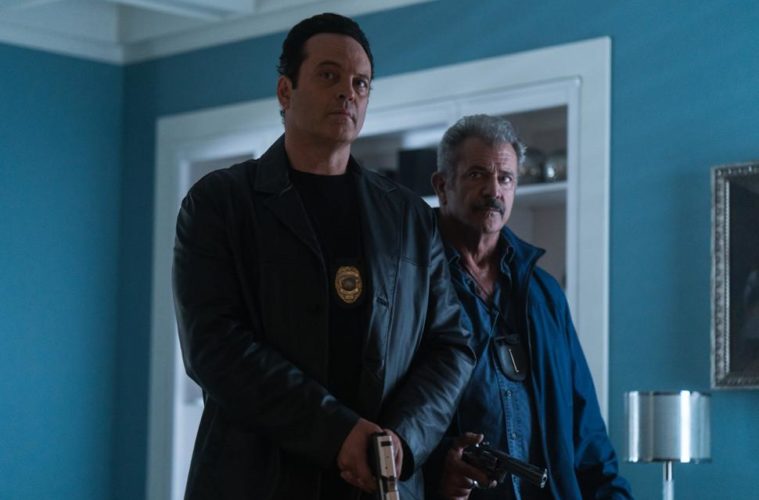 Anyone transfixed by the hyper-stylized meathead triumph of blood and violence of Brawl in Cell 99 should be warned. Dragged Across Concrete, S. Craig Zahler’s third feature, is comparatively much tamer than his 2017 prison drama. But where the new entry lacks in bloodshed and bone-splintering violence, it still confirms Zahler’s penchant for complicated characters, and conjures up a bad cops action movie which, despite blips in tension and a second half far superior to the first, crystallizes Zahler’s as a key name to watch for lovers of the genre.

The two bad cops are detectives Brett Ridgeman (Mel Gibson) and Anthony Lurasetti (Vince Vaughn). Ridgeman is a few weeks away from turning 60, yet still holds the same rank he had at 27; Lurasetti is 20 years younger and struggling to rise up the ranks of the city’s police department, but promotions and raise prospects fade out after a video of their heavy-handed tactics against a powerless suspect is leaked to the media. Any hopes of connecting with a disgraced couple of racist and unduly violent cops should be thrown out of the window in a split-second, except Zahler complicates matters a little, flashing out the two as family men fighting to protect their loved ones.

Vaughn has just saved enough to buy his fiancée a ring, and now awaits a chance to propose; Gibson returns home to an ex-cop wife (Laurie Holden) who suffers from multiple sclerosis and can barely walk around the house, let alone protect their only daughter (Jordyn Ashley Olson) when a group of black kids from the neighborhood assault her on her way home from school. A retired policewoman (“and as liberal as an ex-cop can be,” by her own admission), Holden’s character is itching to move out to a better area, but the plans are stalled after Gibson and Vaughn are given an unpaid six weeks suspension following the video’s scandal.

Does this justify the wanton cruelty the two are culpable of? Hardly, and in the case of Ridgeman, there’s an awkward metafictional echo to the pep talk he is given by a superior: “Being called a racist today is like being called a communist in the fifties.” Haunted by bills and the prospect of no salary in the foreseeable future, the two embrace the underworld and become bad cops tout-court. Tipped by a local mobster (Udo Kier) they run after a powerful thug (Thomas Kretschmann) and his gang of African American muscle men, who are plotting a big heist. Cut to Dragged Across Concrete’s second storyline: one of Kretschmann’s black aides, Henry Johns (Tory Kittles), is a former convict who’s just got out of jail, but returns to “the vocation” after realizing his single mother has resorted to prostitution as a means to make money for herself and his disabled younger brother.

If the prospect of a redemptive storyline for the Gibson-Vaughn duo felt problematic (to put it lightly), with Zahler clumsily attempting to cast the two as victims of a system where being able to “politic” is a far more effective means to progress than the ability to deliver “some good work,” Kittles’ background story is a far more solid piece to anchor the choices he’ll be making later–including the ones that will lead to the most tragic consequences.

Like Brawl in Cell Block 99 and Bone Tomahawk before it, Dragged Across Concrete starts off deliberately slow. The great stage chemistry between Gibson and Vaughn notwithstanding (an endless source of gags between the two, with Vaughn’s leitmotif exclamation anchovies a standout), the preliminaries do feel long, and one wonders whether why Greg D’Auria should have allowed the film’s whooping 159 minutes to sprawl so far beyond the two-hour mark. That proviso aside, by the time the action kicks in with a run after the thugs and the heist’s treasure Dragged Across Concrete hits a nail-biting pace, culminating in a tour de force of car chases and gun fights, its visual impact amplified by director of photography Benji Bakshi’s ability to work with a dark palette.

Caught in the crossfire, this is where Dragged Across Concrete truly takes off. As the showdown between cops and thugs begins and Gibson and Vaughn brace for a fight to the last bullet, the tension is at a zenith point. It is a little unfortunate that, important as they are to pave the way for it, the previous two hours don’t quite compare to a grandiose finale of Zahler’s rollicking, trademarked fury.

Dragged Across Concrete premiered at Venice 2018 and opens on March 22.