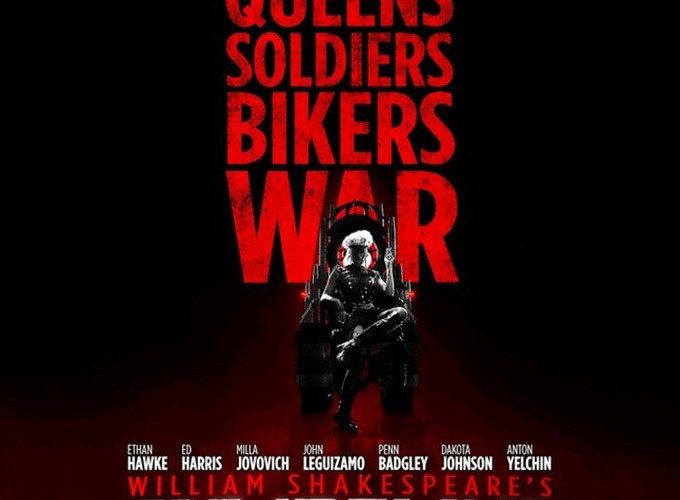 It was 2000 when Michael Almereyda debuted his Hamlet adaptation, with a young Ethan Hawke as the troubled prince and a steely, haughty Manhattan skyscraper in lieu of Denmark. An alluring, timely rendition of the play – post-Luhrmann’s bombastic Romeo + Juliet, pre-9/11 – Hamlet remains interesting today because of the way it effortlessly captured that fleeting moment at the turn of the century, when the world was about to change and technology was in awkward flux.

Almereyda is back at it fourteen years later with Cymbeline, a dramatically clunkier Shakespeare play, both in and of itself and for the challenges it presents to a modern adaptation. It’s sort of a hybrid, a composition of many familiar parts the Bard had made central elsewhere, here reimagined in the Sons of Anarchy mold (which itself based its premise on Hamlet). Ed Harris stars as the titular character, the boss of a biker gang from a backwater, spectral town. Cymbeline and his second wife (Milla Jovovich) both have kids from previous relationships (Dakota Johnson‘s Imogen and Anton Yelchin‘s Cloteen respectively) whom they’d like to pair together – except that Imogen is madly in love with penniless skater Posthumus (Penn Badgley). Promptly banished by Cymbeline for his audacity, the handsome young lad must also contend with Iachimo (Ethan Hawke) and his wager: to prove that, if presented with a chance, Imogen wouldn’t be all that faithful. Naturally, Iachimo is volunteering for the task and is determined to win her over or, failing that, at least take some compromising pictures in her bedroom to fake the whole thing.

The plot has a lot more to offer – there’s a marvelous Delroy Lindo who’s kept the true heirs to the biker throne hidden away, and a problematic reinterpretation of the Roman soldiers as police officers looking for a payoff – and that’s actually the bad news. In its build-up, Cymbeline is gracefully stylish, deliberate in pacing and rich in background details. But as we approach a bloated, underwhelming finale everything seems to move at half-speed, with no sense of urgency and a cognitively dissonant resolution that falls flat on the conveniently-gathered cast of characters. Even the remarkable cast (Lindo is joined by more underrated talents like John Leguizamo, Bill Pullman and James Ransone) seems at times uncomfortable with the material. Ed Harris, of all people, is utterly unconvincing in his dialogue, out-shined by Hawke, Yelchin and even the relatively unexperienced Dakota Johnson.

It’s especially disappointing since Almereyda otherwise nails the adaptation game, trimming down the text with lavish slow-mo inserts to move things along and – more importantly – by dressing up the upstate New York locations with some nifty, Halloween-themed production design. There’s a real, original mood to those early scenes, even though it’s unfortunately eclipsed by the overbearing parallels drawn between the original verses and the abundance of modern devices.

Cymbeline premiered at Venice and opens next spring.