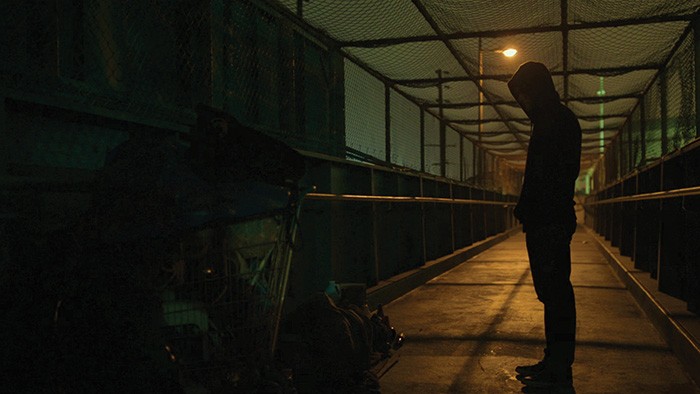 Tribeca Review: ‘Tilt’ is an Intriguing, But Heavy-Handed Psychological Thriller

If only we could go back to the days when mid-life crises happened at fifty-years old and at best meant buying an expensive car (at worst asking for divorce to marry younger). Now this existential breakdown occurs much earlier — let’s say thirty-years old. This is what happens when millennials are born of an era with more time to think about their futures. Rather than needing to buckle down and secure a career straight out of college, your drive for the “best fit” leads to multiple wrong turns and changes of heart until adulthood can’t help but slap you in the face via financial burden, familial responsibility, and waning energy. Even so, I never anticipated this infamous rite of passage would eventually include homicidal tendencies. Welcome to Trump’s America.

Or I should say welcome to Kasra Farahani‘s metaphor for Trump’s America entitled Tilt. I think that’s the idea behind this psychological thriller gradually detailing the disintegration of Joseph Burn’s (Joseph Cross) … sanity? Social conformity? Humanity? It’s a glimpse at his frustrations stemming from stagnancy, creative bankruptcy, and an inability to be emotive, engaging, or loving. His depressive and easily distracted documentary filmmaker is shown drowning under the weight of his once idyllic life. The hope was that a vacation in Hawaii would help clear his head and ready him for the transition towards fatherhood. But maybe this escape only assisted in pushing his dark thoughts to the surface. Either he didn’t need to be “Joe” there or he finally learned to embrace the “Joe” he ignored.

What’s interesting is that he isn’t a Trump proponent. He hates the guy. Joe makes it a point to position himself as the very antithesis of everything Trump stands for, his latest documentary an extension of his self-satisfaction in being immune to the rhetoric, spin, and blatant lies the rest of American feeds upon. Joe fancies himself an intellectual subversive, one who sees below the surface at what’s happening out of sight of the layman’s eye. And he gets angry when others cannot understand his explanations. He hates when people dismiss his first film’s modest success because to him it had value beyond entertainment. Where the few who bought copies and tickets saw the “fun” of pinball as a game, he saw it as an international political machine. So he becomes filled with ideas of grandeur. He sees himself as a messiah in a world falling apart, someone brimming with a destructive energy devoid of an outlet. Joe ultimately embraces Trump’s mold of entitled narcissist who doesn’t have time to appreciate others’ success because they miscomprehend his. He spends hours everyday in a closed room editing footage that seemingly helps expose how mindless we are to persuasion and manipulation all the while becoming prey to the same notion of brand marketing himself. Rather than be brainwashed into allegiance with a #MAGA campaign set-up to fill its orchestrator’s pockets before his voters, Joe’s been brainwashed into becoming an orchestrator himself. He will cause a revolution and expose America’s complacency by proving “safety” no longer exists.

As Trump sought to cultivate fear in the “other,” Joe’s subconscious is forcing the world to fear him. A bloodlust is growing, his drive to be recognized as an artist of note breeding rage. People are ignorant to what’s really happening — sheep leading themselves to the slaughter. Joe has been attempting to open their eyes only to discover they’d rather stay asleep. They’d rather go through the motions as society has laid them out, success not coming from hard work but conformity instead. So something in him has snapped. He sees the dangers so clearly now. He sees beyond the false sense of security we’ve watched disappear without doing anything to stop it. And he craves the power of this awakening. Life and death flows through his hands.

It’s an intriguing concept and one that shines through if by nothing else but Farahani and cowriter Jason O’Leary‘s heavy-handed presentation. We’re constantly bombarded with Trump sound-bytes and Joe’s commentary. We watch the humorous examples of propaganda past generations were fed opposite Joe’s self-important monologues that only work to do the same thing for different reasons. Whereas “Duck and Cover” worked to fabricate calm compliance, he works to ignite anarchy through free thought. Unfortunately there’s little excitement to this revelation and a whole lot of repetition. Joe hates how people ignore the “bigger” issues beyond their specific lives. He hates that they don’t think what’s happening will affect them. He can’t avoid the danger anymore so he embraces chaos, feeds off fear, and shows how trust isn’t real. So he pushes his wife Joanne (Alexia Rasmussen) away and even intentionally sets up “accidents” to hurt her. Is it to wake her up or steal control? He sees opportunities to hurt strangers and pretends to act. Is it to wake them up or steal control? Will he kill a tourist? A dog? His wife? At a certain point I needed him to do something because the constant lead-ups to violence only to feed on possibility rather than action became excruciating. I saw what Joseph was conveying but his long-winded explanations bored me as much as those he attempted to convert. We see he’s falling apart and appreciate that he’s conscious of the metamorphosis. Farahani visually provides this thesis, but then follows it up with redundant dialogue too.

I liked what Tilt had to offer, but the way it’s delivered is too literal. It felt like Farahani is as frustrated with his audience as Joseph is his, the decision to show and tell causing me to check out rather than invest. The cool surreal details (a ghost who hits us over the head rather than haunt and messages read in graffiti on walls and magnets on refrigerators) provide a ton of anticipation but little payoff. The psychological underpinnings exposing our world as an uncertain and precarious place to live come early but are never expanded upon. Instead those metaphors and themes take an abrupt backseat to what amounts to another generic descent into madness. I enjoyed the why of Joe’s fall, but not the fall itself.

The latter is just Cross looking dead-eyed into the camera, each subsequent scene of him silently fighting the urge to kill exactly like the rest. It’s the moments where we see his would-be victims’ fear that excel to portray the filmmakers’ thesis. We’re told to fear street corners populated by drug dealers and that daylight or private backyards are safe. Joseph subverting those notions is where the film grabs hold because we freeze when “normal” is proven false. We fear strangers and trust those close. Mexicans are rapists and Arabs terrorists, but the person who could kill us while we sleep every night is okay. The truth isn’t so simple. The results of Joe’s actions are always more interesting than Joe. Too often the film forgets this fact.