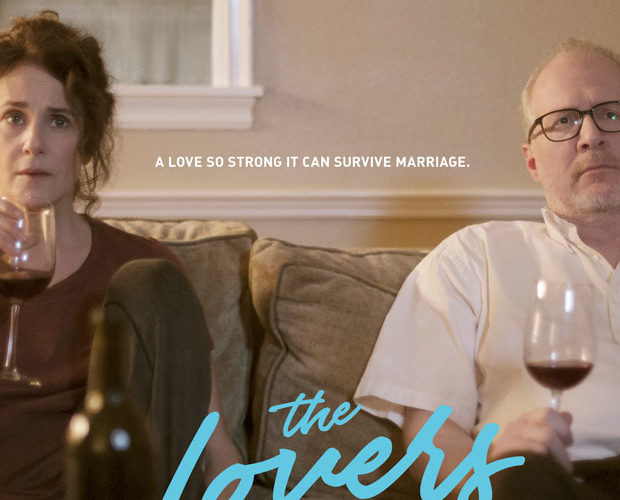 When a film is labeled as being a marriage drama, it is usually without question that it will contain some aspect of infidelity, and while The Lovers indeed begins with this premise, it presents the rather rare situation of “re-fidelity.” Featuring superb performances from Tracy Letts and Debra Winger, writer-director Azazel Jacobs has assembled an impeccable ensemble, but his script doesn’t quite have the dramatic acumen to make his Terri follow-up much more than an amusing farce.

For many years, the relationship between Mary (Winger) and Michael (Letts) has been going through the motions, to put it kindly. Their dormant union is one where even a moment of eye contact is rare, best exemplified when Michael is in the bathroom, pretending to be brushing his teeth, but he’s actually on the phone, as his wife is doing the same in the bedroom. An evening when they are both sitting on the couch drinking wine is the equivalent of passionate intercourse. They are also frequently late to their soul-sucking office jobs, only there long enough to go continue their respective affairs on a break or after work.

Presented with harmonious congruity, each of their affairs have reached a state in which they are almost ready to reveal that they are about to break off their marriage — that is, until after their son Joel (Tyler Ross) his girlfriend Erin (Jessica Sula) visit for a three-day trip. For Michael, his mistress is an emotionally unhinged ballet instructor Lucy (Melora Walters) and Mary has fallen for the charming, sly Robert (Aiden Gillen). While Mary and Michael treat their lovers-on-the-side with a modicum of indifference, their respective partners have endured this long-standing secrecy enough, and prod for a marital revelation. However, one morning, Mary and Michael partake in an unintended kiss, and a romantic spark re-ignites, causing their infidelity to become more of a nuisance than a stimulating extra-marital desire.

Filmed by cinematographer Tobias Datum with a controlled eye for confined spaces and the interaction therein that is the cyclical routines of marriage, while this decision brings an aesthetic foresight absent in most movies of this ilk, it also results in a pre-programmed feel to the proceedings. Coupled with Mandy Hoffman’s bombastic, symphonic score, The Lovers will grab one’s attention with its style, but it also strips away the dramatic authenticity that Winger and Letts both exude. Epitomized in a scene following this re-sparked attraction, Mary sits on the edge of the bed after Michael, wearing only his towel after a shower, seats himself on the side. Before the pair are able to convincingly express their mutual desire, the score bursts in, telegraphing the entire crux of the prolonged scene from the first music cue.

Counterbalancing Jacobs’ accentuated approach, both Letts and Winger are in top form. The former, with his vanity-free, frame-filling presence, is a pleasure to watch as he navigates the tricky, uncomfortable waters of satisfying both his demanding mistress and renewed marital bond. The latter, although underwritten compared to Letts, delivers the film’s most emotionally honest performance, conveying a sincere indecisiveness when it comes to where her heart lies. Despite the admirable work both of these actors put in, Jacobs’ farcical script and form constructs a barrier in getting to know their characters. When everything is done with a wink, it’s not a surprise to have a reaction that comes down to a shrug.

The Lovers premiered at Tribeca Film Festival and opens on May 5.