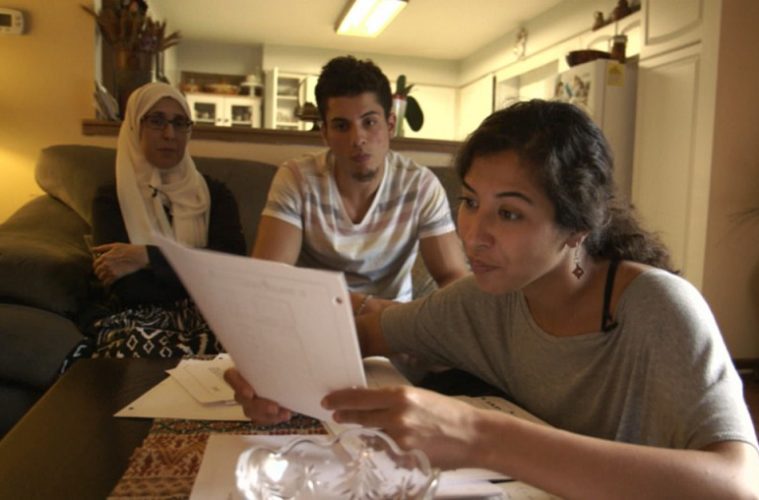 Tribeca Review: ‘The Feeling of Being Watched’ is an Engaging First-Person Doc with No Simple Answers

Public radio producer-turned-filmmaker Assia Boundaoui faces a problem in how she approaches her autobiographical documentary, The Feeling of Being Watched: she thinks she’s too nice. Confronting the surveillance of Muslims prior to 9/11 in her Chicago suburb hometown of Bridgeview, IL,  she finds herself up against the stereotype of an Americanized Muslim. She’s brought up to over compensate for her “otherness” – studying hard, being polite and well disciplined. But she of course finds herself in the position all good journalists taking on the system should: feared by both sides as the film evolves into a terrifying thriller about the power of the media fighting back.

Bridgeview was home to an infamous information capturing program called Operation Vulgar Betrayal (OVB) which turned the community on itself as Islamic institutions were investigated for their financial ties to terrorism through their humanitarian work. The moderates of Bridgeview were simply being Muslim and their generosity is astounding, raising money for direct needs within the community and families in need.

Growing up in the shadow of OVB, Boundaoui opens the film with an antidote about being woken up by employers installing a tap on a phone line in the middle of the night, her other tells her not to worry, that’s it’s probably just the FBI. Boundaoui, as an adult, trained in journalism, hits a dead-end while working with a community that’s been trained not to snitch, forcing her to file FOIA requests with the FBI leading to a court battle to reveal the contents of the OVB investigations. Responding to the request they initially slow down the flow of information citing the manpower needed to redact it – leading to a continued court showdown as Boundaoui circulates the privacy waiver forms needed to proceed.

Part indictment of surveillance gone too far, and part a coming of age story for its director – who early in the process admits she hates the “man on the street” kind of journalism that she’s now forced to do, knocking on doors to research OVB’s effect on the community, The Feeling of Being Watched is familiar story about government overreach that edges towards a thriller. Boundaoui is in a position to ask the tough questions – finding herself squaring off against the retired prosecutor who agrees to sit down and an FBI special agent who contacts her by first knocking on her mother’s door – she comes of age as a journalist swearing to watch the watchers. As timely as the film is, the fact that the OVB documents are still in limbo leads (depressingly) to the possibility of additional films and/or follow up bonus materials in the future – it’s noble, if not frustrating to set out to make a film that one is not entirely possible to compete. Regardless, The Feeling of Being Watched is an illuminating documentary told through an engaging first-person perspective through the eyes of someone who as a kid may have not seen the entire picture – and as an adult is now starting to put it together before our very eyes.

The Feeling of Being Watched played at the Tribeca Film Festival.