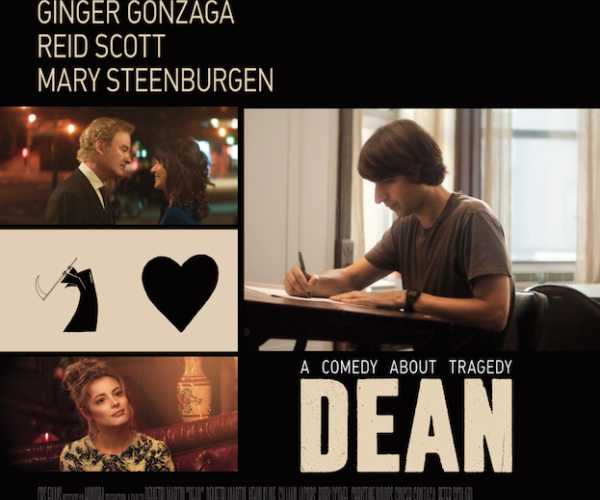 The most piercing comedy is often mined from the darker aspects of life, presenting our fears in a new, hopefully amusing light. While Demetri Martin‘s stand-up has tinges of this, represented in his lo-fi sketches and carefully constructed one-liners, his directing and writing debut Dean effectively melds, both on the page and stylistically, a dramatic backbone with his personal brand.

Setting the tone by opening in a cemetery, Dean (Martin) places flowers on his mother’s grave, alongside his father, Robert (Kevin Kline), hinting at a lingering certainty of death that occupies his character’s headspace. Working as a cartoonist in New York City, he’s trying to get his second book of illustrations off the ground, but keeps coming back to images of the Grim Reaper as he processes the loss of his mother and a broken engagement. If this all sounds rather dour, Martin’s approach is relatively upbeat, for he utilizes these illustrations to help convey his story, with split-screen often helping condense moments.

When the wedding of one of his best friends goes awry — complete with hilarious banter when a co-best man attempts to take the spotlight — he wakes up with a donut-assisted hangover by a call from his father. When pressed to finally deal with selling their now-lonely house, his only excuse to avoid coming to terms with another loss is to head across the country, and so he decides to take up an offer to meet with a Los Angeles advertising agency that wants to utilize his illustrations for a campaign.

Martin’s relaxed approach to both scene and overall plot structure, not unlike his stand-up, is one of Dean‘s blessings. A sequence in which “creatives” verbally spray buzzwords at him while an A.I.-controlled car rams against his legs are as funny as an unexpected, fourth-wall-breaking insert featuring Dean’s friend, Eric (Rory Scovel), upon learning of his peculiar obsession with cats.

Martin also captures the deep sense of loneliness that can happen to an outsider visiting Los Angeles. Holed up in a hotel room drawing as he exhausts his short list of friends in the area, he does finally find a connection with Nicky (Gillian Jacobs), whose character thankfully blossoms beyond a savior for Dean’s emotional longing. Other supporting actors aren’t as lucky, such as the overbearing, on-the-verge-of-a-breakdown rising actress Becca (Briga Heelan, Jacobs’ Love co-star), who feels too cartoonish even for a film full of roughly sketched characters, quite literally.

Some of Dean can feel rough around the edges as Martin tries to pack his touches into every corner, but cinematographer Mark Schwartzbard brings a polish with wide framing, finding beauty in the Los Angeles vistas and New York streets. As Dean tries to navigate a life without his mother, Robert is attempting to do the same in New York. Proving they have some off the most affable personalities in the business, Kline’s character begins to date his real estate agent, Mary Steenburgen‘s Carol, fostering a budding relationship that couldn’t be more perfect on paper. Yet the loss of his wife is still an emotional roadblock, as Dean eloquently shows in its prolonged process of loss.

Backed by feel-good tunes from the likes of Pete Dello, the film nearly teeters into territory we’ve seen covered in countless other indie dramedies, but Martin never succumbs to the easy-to-please quirk that drowns so many others of its ilk. The influences of Woody Allen, Wes Anderson, and Hal Ashby can certainly be felt, but by staying true to his offbeat brand of comedy, Martin has something compelling to say about moving on amidst — or perhaps because of — the humor of life.

Dean premiered at the Tribeca Film Festival and opens on June 2.