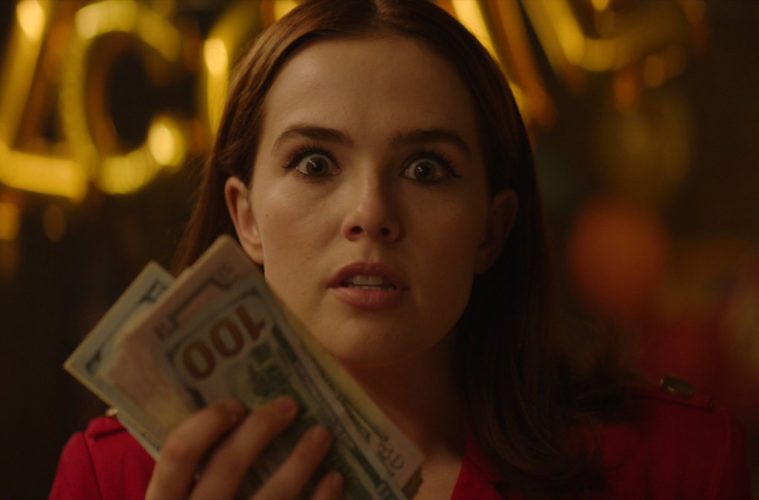 Set in the rough and tumble world of South Buffalo–the streets that raised tough guys like the crude former New York State gubernatorial candidate Carl Paladino–Buffaloed is a surprisingly fun comedy about the rise and fall of an up-and-coming hustler, gleefully played with a thick (and accurate) Western New York accent by Zoey Deutch. Deutch’s Peg Dahl aspires to not be another house-wife raising her kids on five-cent wings and starts running minor cons in high school until selling bootleg Buffalo Bills tickets lands her in prison.

In jail, she studies the basics of distribution while learning to fend herself. Sales, she believes, is at the heart of everything. After her release she finds herself back in South Buffalo, living with her mom Kathy (Judy Greer), who runs an unregulated salon out of a laundry room at home and working at her brother JJ’s (Noah Reed) local dive bar. In debt from her legal bills, she sees an opportunity when a lame debt collector rings her up and she makes a local debt king an offer he can’t refuse: if she tops his leader board her debt will be cleared.

Wizz (Jai Courtney), a tough guy ready to crack skulls, runs an operation out of a sad warehouse without any computers. Despite its 80s style, the film shockingly takes place in 2018, yet no one seems to own a smartphone. This is by no means the hipster image perpetrated by the “new Buffalo” with its breweries and new industry, but nevertheless Buffaloed is often an over-the-top yet affectionate look at the working class. Directed by Tanya Wexler and written by co-star Brian Sacca (a Buffalo native), they take an authentic look at the often Polish side of town where everyone, including the judge and prosecutor, has a perspective on Duffs or Anchor Bar for wings. (For Buffalonians, it’s like identifying with the Crips or the Bloods.)

Peg’s problems become compounded when she starts to date the local prosecutor Graham (Jermaine Fowler) who once locked her up for her Bills ticket hustle and is now circling in on Buffalo’s gray area debt collection industry where “paper” (debt) is bought for pennies on the dollar and used to intimidate broke people. Peg believes she’s selling relief and after a certain point she decides it’s time to go it alone, assembling hustlers from all walks of life in Buffalo, from ex-cons to door-to-door bible salesmen. As you can imagine, this does not go over well, leading to a series of lively double crosses as Wizz and his team go to war on Peg and company.

Buffaloed proves to be a lively character study, adopting a breaking of the fourth wall as Peg explains the particulars of an industry that flourishes in Western New York; a drinking town with a sports problem where everyone bleeds Bills blue. The film subsequently gets a lot right about the spirit of the town while unfortunately avoiding its resurgence and stunning architecture in favor of strip malls and working-class homes.

Buffaloed premiered at the Tribeca Film Festival and opens on February 14, 2020.