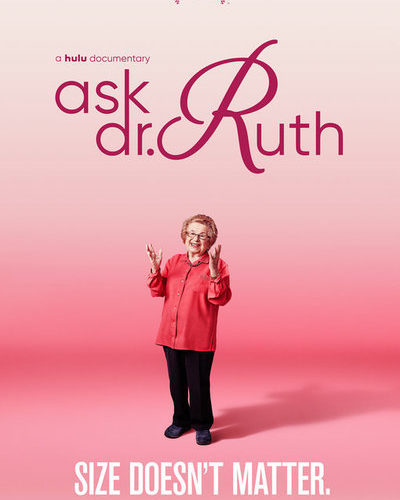 Following her as she enters her ninth decade in life, White struggles to keep up with his subject, capturing her everyday adventures from her modest apartment on the Lower East Side to Israel where she learns the fate of both her parents who had sent her away on the Kindertransport, saving her life. She arrives in the U.S. in 1956 and later in the film’s most touching passage reconnects with an ex-boyfriend from her time in Switzerland.

Dr. Ruth defies definition, thinking of herself as a Holocaust orphan rather than a survivor and a believer in equal rights for women while resisting the term feminist. In one of the film’s lighter moments, Ruth banters with her granddaughter over the term. She ends the argument by agreeing with her agenda while saying in her thick German accident, “You don’t have to burn your bra.” Her stances have famously moved the needle despite refusing to take an outright political stand. She’s a product of a time when polarizing politics were simply not polite conversation and best kept to one’s self.

Westheimer’s rise to prominence is chronicled with her trademark wit and spunk that allowed her to easily keep up with the greats of late-night comedy as she finds her niche as the nation’s sex therapist. Ryan White could have easily cultivated an entire mini-series on a woman who has not been shy about championing the noble cause of good sex. As Westheimer seeks the spotlight for her cause, including starring in her own ABC sitcom pilot Dr. Ruth’s House, she continued to write, teach, and practice as a licensed sex therapist. Focusing on the woman behind the myth is an authentic approach, resisting diving into a trove of “best of” series of clips, although there is plenty of time for that.

Despite its spunky tone, Ask Dr. Ruth feels like several documentaries in one rather than a comprehensive look at a fascinating and enduring woman who shows no signs of slowing down. Thankfully, the film never feels as if it’s a work of branded content but rather an honest and intimate portrait of a revolutionary American cultural icon.

Ask Dr. Ruth played a Tribeca Film Festival and is now in theaters.