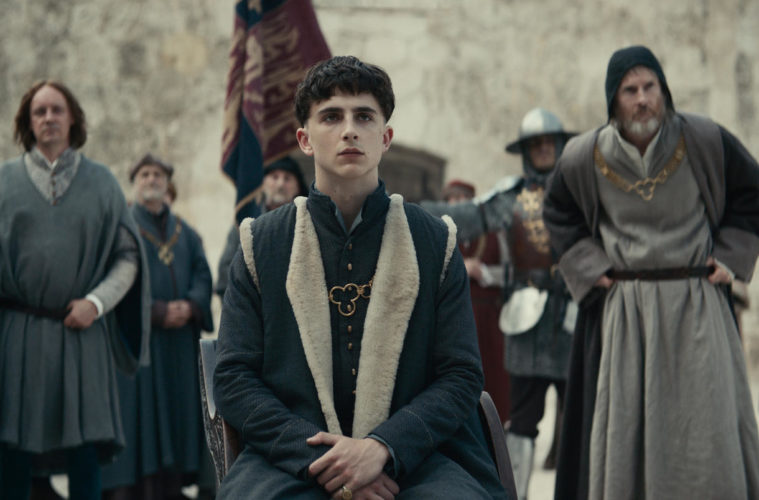 Timothée Chalamet is getting medieval. For his next role, the Call Me By Your Name star is leading David Michôd’s The King, which includes the impressive supporting cast of Robert Pattinson, Sean Harris, Ben Mendelsohn, and Lily-Rose Depp. Based off the Shakespeare play Henry V, and adapted for the screen by both Michôd and Joel Edgerton, who will also star in the film, Chalamet plays Henry V in the titular role and will follow his involuntary rise to power after the death of his brother–all while facing military conflict with France.

Ahead of a Venice premiere and release this fall, Netflix have now debuted the first trailer, showing off Chalamet’s now-infamous bowl cut–and a Pattinson look we’ll leave unspoiled before you click play–as the intensity amps up. Michôd’s last Netflix collaboration, War Machine, didn’t go down so well, but hopefully better things are in store for this period epic, which premieres soon at Venice before coming to Netflix.

Hal (Timothée Chalamet), wayward prince and reluctant heir to the English throne, has turned his
back on royal life and is living among the people. But when his tyrannical father dies, Hal is crowned
King Henry V and is forced to embrace the life he had previously tried to escape. Now the young
king must navigate the palace politics, chaos and war his father left behind, and the emotional
strings of his past life — including his relationship with his closest friend and mentor, the aging
alcoholic knight, John Falstaff (Joel Edgerton).

The King premieres at Venice and hits Netflix on November 1, with a theatrical run beginning October 11.