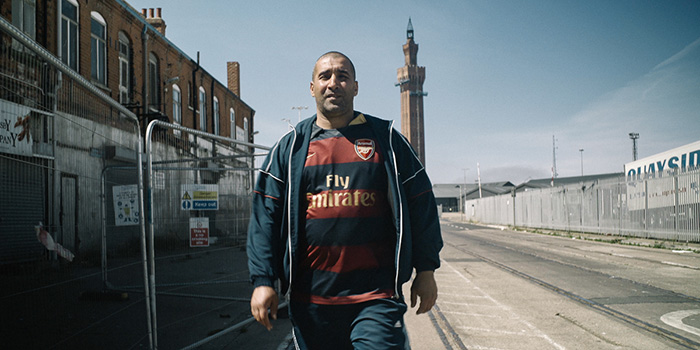 TIFF Review: ‘My English Cousin’ is a Bittersweet Adventure Devoid of Answers

It’s been seventeen years since Fahed Mameri left Algeria to achieve a better life in England. Since then he has settled in Grimsby (a place with high unemployment and little infrastructure to sustain a healthy living), married an Englishwoman, and found two jobs with which to earn barely enough money to pay the rent. Because his dream of prosperity hasn’t quite worked out, nostalgia for family and the more conservative lifestyle of their African nation instills a desire within to return. His mother is growing older and soon to be in need of assistance. The ideal of a homemaking wife brings comfort. And it only makes sense he’d want to finish out his own life in a familiar place where his experiences can be put to good use. You could also label this change of heart a mid-life crisis wherein Fahed merely grew bored of stagnancy. Maybe his plans aren’t about leaving England as much as finding a way to spark the sort of excitement he can’t receive waking at five in the morning to work two jobs and eventually rinse and repeat. You have to believe this uncertainty and potential false pretense is why his cousin Karim Sayad decided to follow him and document the move via My English Cousin. Fahed might have agreed because he was happy about his return and the shopping sprees to buy anything and everything his relatives wanted, but a joyously uncomplicated reunion could never be as intriguing as a conflicted heart’s inability to choose one world above the other.

For his part, Sayad captures exactly that thanks to Fahed’s British flatmates and Algerian aunt. The former are kindred spirits themselves caught in the doldrums of unsatisfying lives working for the 9-to-5 rather than the present—men seeing his move as something good they can vicariously enjoy. They want him to be happy because they aren’t. But this truth only makes us aware that Fahed might not be able to sustain his own good humor for very long either. His aunt on the other hand can’t help knowing her nephew too well to accept what he says over what he’s doing. She knows his mind still recognizes England as home regardless of plans to marry in Algeria. He seeks the best of both worlds while ignoring the consequences. We travel through Fahed’s experiences via chapters devoid of transition. There’s no footage of goodbyes or welcomes at airports—just the comedy of weighing suitcases, knowing his heavy drinking friends won’t wake up to see him off, and the eventual abrupt change of environment around him. This wouldn’t be a problem except that it seems many important current affairs got lost in translation. Kiva Reardon says in her TIFF write-up that Sayad “takes on Brexit and the recent protests in Algeria calling for the resignation of long-sitting President Abdelaziz Bouteflika,” but those were either missed by me or relegated to window-dressing courtesy of my own ignorance. I remember a conversation about Tony Blair and the protest itself, but no context beyond them being moments in Fahed’s “normal” life.

Those things don’t therefore enhance the central idea of Fahed’s confusion. To me they were throwaway sequences that said more about where he was than what was on offer to him by going to the other place. If anything we realize Fahed has no real “good” choice to make considering both governments are unstable and job prospects are tough to find. He’s going to have to work hard regardless and since his inherent masculinity relegates marriage into an obligation rather than a union built on love, he’s still dreaming about some unattainable ideal instead of letting his life progress on its own. He’s striving for what happiness should be instead of discovering what his personal happiness can feel like. Fahed’s adventure is thus bittersweet and devoid of answers. Where that specter of the unknown is great as far as his journey’s resolution is concerned, it was very difficult for me to truly invest when so much is left unsaid and unexplained. One example of my confusion comes from still not knowing whether Fahed divorced his first wife—the status of their marriage actually seems intentionally obscured. And what is put on-screen ultimately becomes too repetitive to say much more than “status quo.” While that’s the point (Fahed is quite literally stuck psychologically and physically by his circumstances), I wonder if the topic would have been better served and more potently told as a short film half the length. Again, though, my detachment might simply be that I couldn’t understand the underlying commentary about the two nations displayed within.

My English Cousin screened at the Toronto International Film Festival.