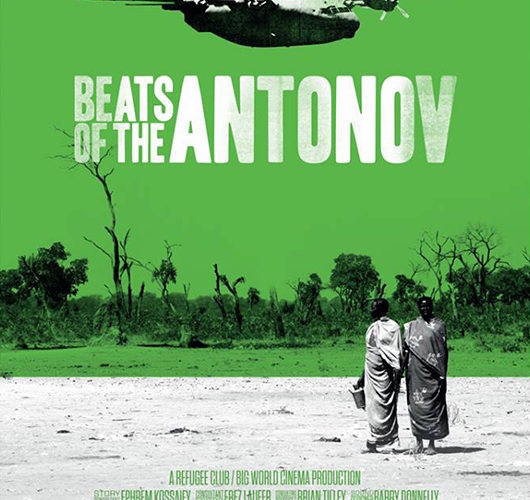 [TIFF Review] Beats of the Antonov

Sudanese director Hajooj Kuka‘s documentary Beats of the Antonov is smartly constructed in a way that eases us into the political message and hope for peace lying underneath the music and laughter initially portrayed. Beginning with a look at the people residing in the Blue Nile and the Nuba Mountains, we learn about the planes overhead dropping bombs while they hide in ditches for cover. No matter how much pain and suffering is inflicted by these raids, however, they emerge with smiles to the fact they have not been hurt—this time. The homemade string instrument called a Rababa is played and everyone sings and dances throughout the day and night until the next aircraft can be seen in the distance. The film therefore depicts their resilience, culture, and strength of identity in their mountain locale. But while this is what should be true, we soon learn it’s merely a façade above what the ongoing civil war decimating their homes truly entails. In fact, these sites aren’t even their homes as everyone displayed is a refugee thrown out of North Sudan by the Arab contingent currently in power known as the National Congress Party (NCP). This isn’t their war—they’ve been thrust into the carnage by being treated like second-class citizens segmented by color, religion, and customs. To those depicted and interviewed, Islam is about tolerance and equality in front of God. To their oppressors it’s an Arab centric belief system supplying them superiority above the “black sacks” and the ability to drive out any infidel traitor refusing to bow to the direction they’re taking the nation.

So the song and dance that have been a traditional part of their lives now takes on a new meaning of defiance. By retaining their music they are expressing how they will not allow their histories to be erased. As long as their children learn their “tribe’s” language on top of Arabic, Sudan has the opportunity of not becoming lost completely. They’ve already begun calling their speech by the Arabs’ derogatory term Rutana and women are lightening their skin with expensive creams. As one interviewee says, they’ve adopted the ways of their oppressors so that they can begin to oppress themselves. The music has therefore evolved into a non-violent combative measure against the injustice. The Rababa plays, young women write and sing “Girls’ Music,” and the drums beat to unify all those refusing to forget who they are. Kuka isn’t afraid to show the violence in play as the film progresses also and we as an audience understand the complete dismantling of a culture happening outside the national news segments showing Khartoum in lieu of the mountain conflict. Members of the SPLA Rebel Forces talk about their military presence being a means to an end because they fight for freedom above all and are very conscious that victory could give them the power to continue the oppression. So they practice complete transparency with the Sudanese refugees in order to always remember what it is they’re dying for. As spoken, “If you cant live in peace with yourself, you can’t live in peace with others.” And until everyone realizes they’re more than simply Arab, Black, and every tribal distinction within, this war never cease to wage.

In Beats of the Antonov‘s brisk 65-minutes we become a part of the bombing raids with Kuka’s shaky-cam footage alongside villagers, join the festivities of local concerts merging audience and musician into one entity, and witness the horror of war with guns blaring, tanks rolling, and bodies carried off the fields. Nothing is staged and those interviewed don’t hold back their frustrations towards the ordeal or their dreams for the future. This is their country and yet they have no place without compromising everything they stand for—and even then they’ll never be equal thanks to the color of their skin. Sudanese native Kuka provides a firsthand look at the struggle that seemingly empty words from Hollywood celebrities about Darfur can’t. And it’s inspiring to see the fire rising as they grab hold of their basic human rights.

Beats of the Antonov screened at TIFF. See our complete coverage below and the trailer above.