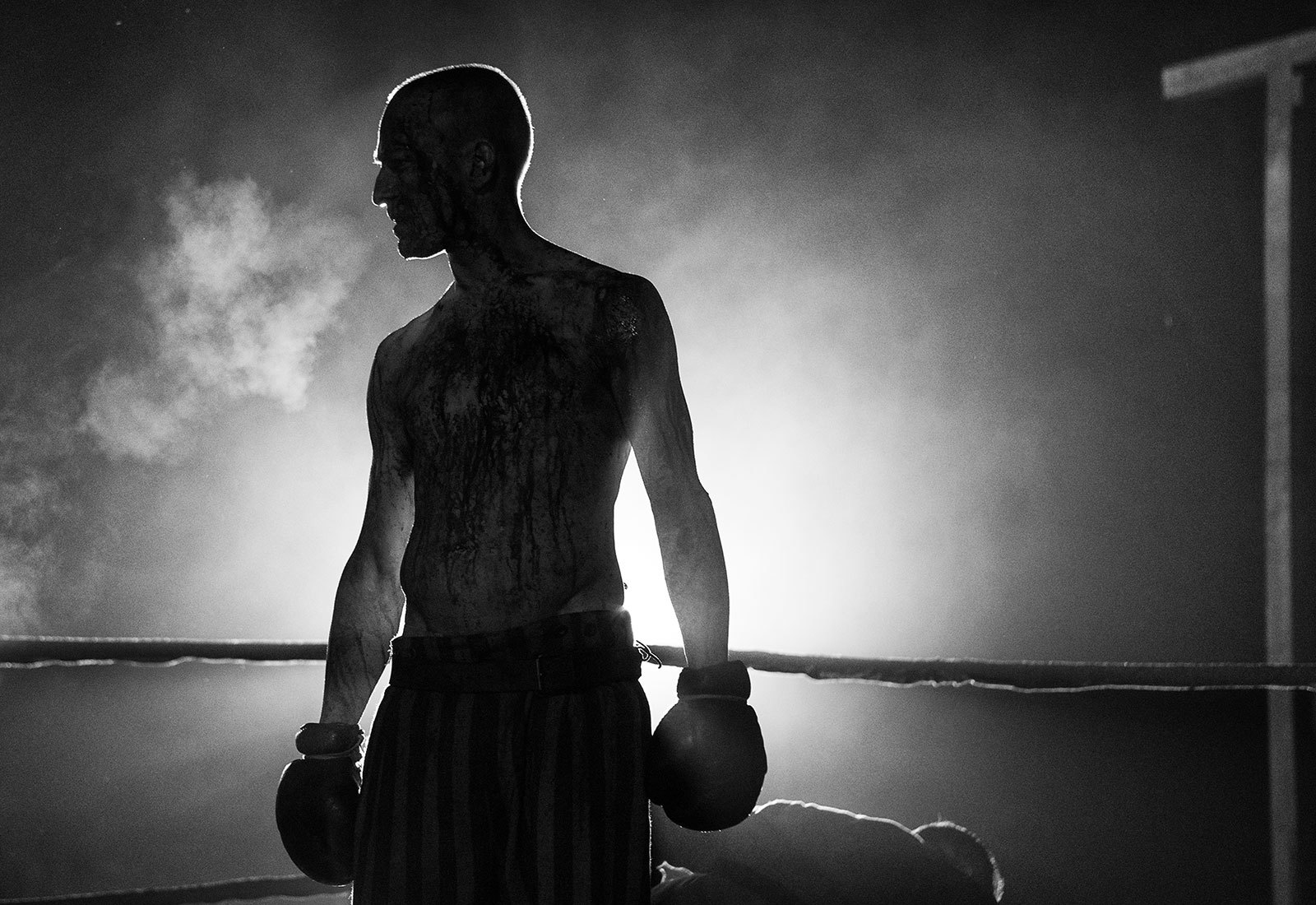 Ben Foster looks bloodied throughout Barry Levinson’s The Survivor. The actor, playing real-life Auschwitz survivor Herschel “Harry” Haft, takes blows to his body and face consistently through the post-WWII film, which follows him as he takes large-scale fights in hopes of reaching his pre-war lover. Struggling with the decisions made while at various concentration camps, Haft fights with an anger that often turns to regret, making him a great fighter—for a few rounds.

Levinson’s drama deploys black-and-white flashbacks to show Haft’s memories—among them the time spent as a prizefighter for German soldiers to stay alive while imprisoned, becoming an integral, suffering part of his friends’ deaths. Tedious and filled with horrific images, these sequences stall the story at hand, telling audiences about the specific demons Haft faces. Levinson leaves little to the imagination, splaying most frames with the emotion the audience should be feeling rather than conjuring anything genuine.

Foster buys into the story with a physical, commanding performance, despite the (occasional) slightness of his frame. He grunts and gravels through the two-hour affair, bouncing from outburst to outburst, infested with inescapable memories seen when he shuts his eyes every evening. Alongside Foster are actors that have the ability to make any film better: Danny DeVito (as an opposing trainer), John Leguizamo (as Haft’s trainer), Vicky Krieps (as Foster’s briefly-seen love interest), and Peter Sarsgaard (as a journalist). More than serviceable, they cannot elevate the dry direction or push this script to engage anything beyond a general indifference.

The Survivor lacks inspiration while chronicling an inspirational figure, missing both creativity and affecting emotional beats, hoping the true story itself will suffice. Harry Haft should be given a more exciting, sensitive, and human film––one told with the required intention, care, and imagination. Without thrills or any sense of surprise, Levinson follows a straight-laced narrative, in which marriages can be seen from the outset, fights are decided before they even begin, and flashbacks do more damage than good.

As Haft continues his journey towards his ex-love, the rest of the story falls into place, with no tonal changes in sight. There’s a distinct nature to the present and the past, separated by color, timing, and sheer despicability. But Levinson makes it exhausting to exist in either time period, with the entire endeavor a slog for Haft, his friends and family, and the viewer.

When looking at The Survivor in the context of films about boxing and films about the Holocaust, it fails on both fronts. It never reaches the heights of its predecessors, wishing to both be Rocky and be The Pianist––a showcase of strength in the face of impossibility, and how that resilience can usher in brilliance. Yet Levinson takes little risk here, despite the grim images he’s willing to show of his lead’s past.

There’s something to be said by the absence of joy in The Survivor. Smiling comes at a premium for most characters, which is more than understandable. Levinson captures a difficulty that’s unknown for anyone other than those who lived through the atrocities of concentration camps. He allows cruelty to hiss off the screen but adds little more than the pain. Maybe there’s nothing that can accompany those years of suffering for Haft and so many others. Maybe Levinson depicted all of it in the most realistic way he could. None of that means the film works, though, or that the emotional elements blend with the back-and-forth structure that is employed. Meandering towards a conclusion that needs a greater sense of finality, in those moments––the ones that should have the power to dampen eyes and sniffle noses––Levinson takes a big swing and a miss.

The Survivor premiered at the Toronto International Film Festival.