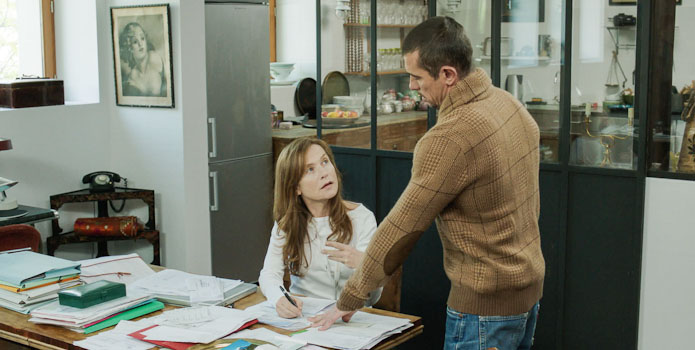 The draw of Catherine Breillat‘s newest, autobiographical film, Abuse of Weakness (known as Abus de faiblesse in its native tongue), is ultimately to watch how someone so desperately in need can be preyed upon no matter their own intelligence, wealth, or stature. When tragedy strikes, unannounced, via a debilitating stroke, the fear of death and paralysis eventually leads to newfound tenacity and strength — but what no one who isn’t absolutely indebted to the help of others for even the most menial tasks (such as opening a door) can know is that the simple act of showing up may prove all-powerful. A friend with the rare quality of not tainting every kindness with a healthy dose of pity is everything. When that person is the only one taking the time to call and visit each day, you can’t really be blamed for doing whatever possible to repay the favor.

Here’s the problem, though: while Isabelle Huppert delivers a stunning portrayal as the director’s stand-in, Maud Schoenberg, one glaring fact prevented yours truly from providing their undivided sympathy. The con man of this tale (French rapper Kool Shen) isn’t some wolf in sheep’s clothing. Maud knows exactly who he is (an ex-con), what he’s done (fleece millions from rich and poor alike), and invites him in precisely for those traits. She sees his remorseless confidence during a TV interview and believes him to be a perfect fit for her first film post-stroke. I know this is judgmental to say, but it’s impossible not to think that much of what follows is, in fact, all her fault. In an inspired bit of clarity, however, I believe Breillat feels the exact same way. Why else would she include an early scene of a best friend, Ezzé (Christophe Sermet), telling her that Vilko’s hugely dangerous and needs to be sent away? Her reaction: laughter. It’s as though she wants so much to prove she can take care of her own affairs that Vilko becomes her own proof. If she can handle this loose cannon and temperamental bad boy who revels in such a description, she has officially recovered. I’m not sure anyone could have foreseen the level of compassion she would cultivate, let alone the desire to give him exactly what she knew he was a professional at taking. Maybe that first check for $100,000 was a test to see if he could be trusted. But checks two, three, and four? Those simply cannot be justified.

I’d like to believe this is exactly why Breillat decided to be so candid with her unbelievable activities at a period of extreme weakness. She would have every right to blame her family for not being there when she needed them — and, to a point she does — but it ultimately all falls on her shoulders. She wasn’t coerced or held at gunpoint. She actually thought she’d have the upper hand when getting him to agree to write a bum check, himself, to pay her back. It’s a tragic state of affairs that everyone is susceptible to becoming a victim of if they’re not careful, and Abuse of Weakness, therefore, serves as Breillat’s public service announcement in saying, “Be vigilant.” It’s always someone close to home that hurts you the most.

Even so, the film may go a bit too far in driving this point home, with the constant duping and her consistent check-writing — depicted as though in a trance — becomes a tiring mantra. I get that we need to see how helpless she is to really understand the silent struggle she’s fighting, but when is it too much? The whole ordeal is so intense and intimately personal that the length may actually be a product of Breillat’s own coping process; film is her canvas and she is baring her soul through the darkest and most embarrassing period of her life. Seeing is believing, and she puts everything onscreen to ensure the lesson won’t be forgotten. To those ends, I completely understand her choices despite their inherent redundancy. What no one can fault, however, are the fantastic performances bringing this memoir to life. Shen looks and feels the part so effortlessly that I wouldn’t be surprised to hear Breillat found him much the same way she did the character he’s portraying. With natural charisma and the ability to go from fierce monster to soft, empathetic charity case at the blink of an eye, I’d have believed him, too, if not for the fact that we know his game from the start. It’s so authentic to see him turn on the charm and watch Huppert’s face light up in response. He has her from minute one and knows it.

If the film will be remembered for anything outside its own harrowing true story, though, you don’t have to look further than Huppert. From the opening scene — the character lying naked in bed, desperately trying to feel her arm before an attempt to stand drops her on the floor until she admits her naïveté to her family at the end — Maud is a force of attitude, grace, and courage. She needs to be for us to realize how weak this person is beneath the facade. It’s her verbal sparring with Vilko that actually gets her into so much trouble. He preys on her desire to be in control and uses it to his advantage by pretending to be more helpless than she. Only when the game is over and reality sinks in do we see her fragility in a stunningly adept moment of truth.

Abuse of Weakness plays TIFF on September 6th, 7th and 14th. Watch the first clip above and click below for our complete coverage.