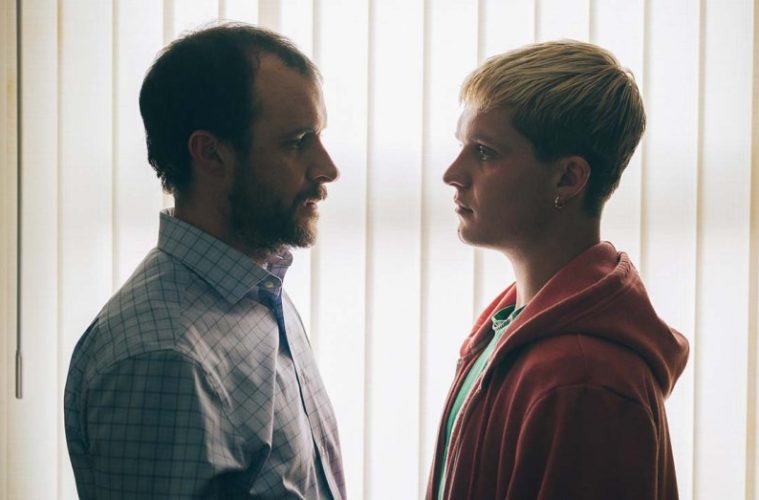 Thessaloniki Review: ‘Rialto’ is a Gorgeously Performed, Poignant Two-Hander on Guilt and Desire

Deep into Rialto, Peter Mackie Burns’ sophomore feature, shy Dubliner Colm (Tom Vaughn-Lawlor) tosses something of a tagline: “We all hate our dads, it’s just natural.” Only a month has passed since Colm lost his abusive and alcoholic father, less than a week since he was fired from a low-level managerial job in Dublin’s docks that has essentially defined him for the past thirty years. It’s a statement the 46-year-old husband and father of two utters in a drunken haze, and it also singlehandedly crystallizes the whole film’s gestalt. A devastating, constrained chronicle of a middle-life crisis, Rialto homes in on a man burrowed in self-hatred and guilt, and follows him after a chance encounter forces those feelings to come to the surface with earth-shattering force.

Following up on his 2017 debut feature Daphne, Mackie Burns teams up with Irish playwright and screenwriter Mark O’Halloran–already credited as scribe in Lenny Abrahamson’s 2004 Adam and Paul and 2007 Garage. Based on O’Halloran’s own adaptation of his award-winning play “Trade,” Rialto kicks off in the public restroom of a Dublin mall. It’s here that Colm first meets Jay (Tom Glynn-Carney), a teenage hustler with dyed blonde hair and magnetic, fiery eyes looking to drum up some cash in exchange for sex. It’s Colm’s first homoerotic experience, if you can even call it one: having pushed and locked Colm inside a cubicle, Jay mugs him, only to show up at the man’s office to extort more money the next day. “I’ll shame you,” the lad hisses, but this doesn’t stop Colm from begging for more, and what started as blackmail blends into an affair, with the two meeting up for quick daytime hookups around the city. But then, what O’Halloran’s script understands all too well is that in their own anfractuous ways, each man needs the other. Their unlikely relationship is a co-dependent one, ostensibly premised on Colm’s wish to fill an existential void by acting upon his pent-up desires versus Jay’s pecuniary concerns. But it is not pinioned to that dichotomy in any simplistic sense. Colm and Jay are both living a same-sex liaison while still ostensibly tied to their respective female partners: Colm is married to Monica Dolan’s loving and supportive Claire, Jay has a 19-year-old estranged girlfriend with whom he just had a baby he looks after when she’s not around. They understand what it’s like not to live up to other people’s expectations, what it is like to be a father, to love and not being loved back. And the reciprocity allows them to open up safe spaces where they can be true to each other and to their own selves. Flickering and short-lived as those moments may be, that’s when a strictly sex-for-money relationship morphs into something as ethereal and powerful as a confessional, and Rialto concocts some of its most humane and harrowing scenes.

Which makes it difficult to bill Mackie Burns’ as a film pivoting exclusively on a man’s struggle to come out. Sure, homosexuality is hashed out as the big elephant in the room here, and just how strong a taboo it is can be gauged by the way both Colm and Jay shudder at the thought their secret could ever leak. But it’d be misleading to treat that as the film’s overarching source of conflict, by and large because Mackie Burns and O’Halloran make it clear neither Colm nor Jay would necessarily identify as gay in the first place. Something far more subtle and universal is at stake in Rialto: an achingly close-up study of frustrated desire swells into a larger epiphany, where a man who’s spent his whole life internalizing hatred and guilt finally begins to imagine himself anew.

True, Jay does serve as a catalyst for Colm’s awakening – casting a mercurial, disquieting halo of light into the man’s lifeless drubbing. But this doesn’t make him a Magical Queer. Even as he eventually needles Colm into reckoning with his self-destructive drives and exorcise his traumas, Jay remains true to his character and his own interests, and there’s something glacial in the way the young lad shuts down Colm’s attempts to blur the rules of the game. You may argue there are moments when Colm’s desire veers into obsession, his longing for Jay into stalking. But Vaughn-Lawlor injects ample doses of fragility and heart-wrenching sadness for the relationship to never exude predatory undertows. Of course, he’s a self-destructive wreck – and whether or not Rialto will speak to you will also depend on how empathetic you will be toward the man’s endless benders, especially as these will inflict much pain upon his wife and children. But there is a great deal of truth in the words Colm tells Jay during a hook-up, “I’m not a dirty bastard,” and in that wanting, desperate question he darts the lad seconds after he agrees with him: “who am I then?” For his part, Glynn-Carney thrives on a role that has him concurrently open up and tread inward, swaggering away as he distances himself from a man who may not be a predator, but whose searching, needy glances pose a subtle threat nonetheless.

Still, there’s a certain insularity to Mackie Burns’ tale, a result perhaps of the script’s stage ancestry, which reduces the film to a chamber drama far more interested in jostling its leads against each other than it is in capturing the universe unfurling beyond their hotel rooms. Colors pop in Adam Scarth’s widescreen cinematography, gracing Rialto with the chromatic frenzy of an Almodóvar picture. But the insistence on mid-shots and closeups of Colm and Jay mean very little emphasis is given to the city and world around them. Then again, as a two-hander, Rialto is the sort of film that either shines or crashes on its actors’ performances. And the stellar work offered by Vaughn-Lawlor and Glynn-Carney ensure it retains a gripping aura even as it recedes into its bleakest, most desolate corners.