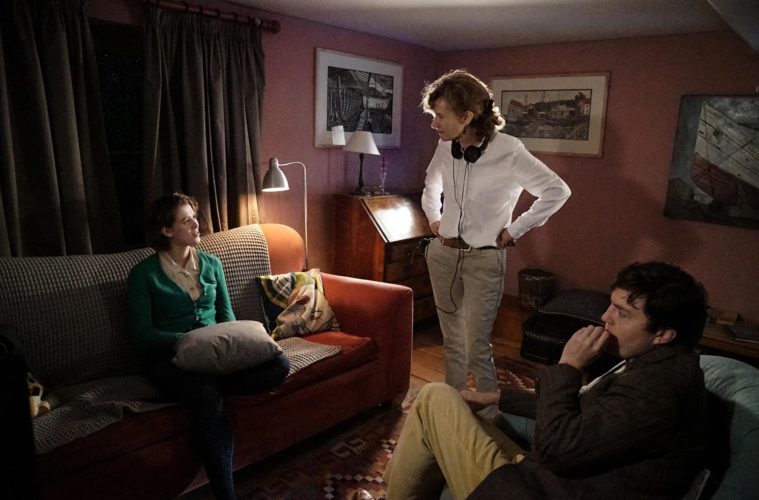 Over just four feature films to date, London-born writer-director Joanna Hogg has become a distinct voice in contemporary cinema, crafting quietly austere and deeply personal works that observe the vagaries of the British upper-middle class. Starring Honor Swinton Byrne alongside her more famous mother, Tilda, her latest, titled The Souvenir, picked up the World Cinema Grand Jury Prize at Sundance earlier this year and arrived in theaters this past summer via A24. Backed by executive producer Martin Scorsese, the film has already introduced Hogg to a much wider audience and a new legion of fans.

Since the premiere in Park City the director has traveled with the film to festivals in Berlin and, just recently, the 2019 Thessaloniki International Film Festival, while simultaneously working on a follow-up due for release sometime next year. Time, indeed, was at a premium, however Hogg somehow found a few minutes to sit down in the northern Greek port city to talk about her distaste for nostalgia, the movies that influenced her as a young filmmaker, replacing Robert Pattinson, and where she’s at with her much-anticipated sequel.

The Film Stage: I was lucky enough to speak with Albert Serra this week and he mentioned that even though his films are set so far in the past he tries to “work in the present, psychologically.” And it was something I thought about when I watched The Souvenir again yesterday. Is that something you would relate to?

Joanna Hogg: Yes, very much. It’s a nice way of putting it actually. Yes, because of the way that I work I’m open to so much that’s happening in the present, it’s not possible to bring something from the past. And I’m not interested in something past; something past is not alive anymore. I want something alive, in the moment.

Does it make it more challenging in that way?

It does, because there’s sometimes a conflict between my idea of the past and how it was and a memory of something and what’s presented in front of me. And then I think it’s that tension between the two–my memory and having to grasp something new–that’s interesting.

In your earlier film Exhibition, the main character is asked by a friend if she’s worried about selling her house because she is nostalgic for it, to which the character kind of balks. Would you say you’re not such a fan of nostalgia?

Exactly, it’s something I’m always trying to avoid–which is obviously challenging with a film like The Souvenir which sort of suggests a certain nostalgia, but I didn’t want to be nostalgic in my approach. And in my approach to the aesthetic of that time I wanted to feel very much rooted in the present but I was using, actually, footage and images from that time. Despite the period setting and the personal nature of the story, a lot of the topics touched on in the film resonate today. Even, in a strange way, the English consciousness of what was happening in Northern Ireland, which is very much in the news right now. How intentional was all that?

Well, it was very much a part of that time so I wanted to weave the tapestry of the events that I remember in the early 1980s into the film. Then there’s also a suggestion that the character Anthony is in some way involved. We never know that.

Was it similar in the way the film is attuned to the difficulties faced by female filmmakers?

I decided to make this film some years ago and the fact that in the interim we’ve had a bit of a shakeup, with MeToo and TimesUp, in terms of just a female viewpoint. That wasn’t happening when I conceived the film and certainly when I experienced a version of that relationship myself back in the early ‘80s, and was beginning to be a filmmaker, my career choices weren’t framed by being a woman and maybe the difficulties of that. I never thought about the difficulties of that. I saw myself as another filmmaker. I don’t think I saw myself as a feminist, but I didn’t see a block between what I wanted to do and getting to do what I wanted to do. I had that confidence I think many people, male or female, have in their twenties where you feel you can do anything you want to do.

What filmmakers would you say have had the biggest influence on your work?

Well, it’s different for each film. My taste has probably changed from when I made Unrelated to now. Certainly with The Souvenir I decided that my influences would be influences that I had when I was a film student, so essentially when I was Julie’s age at the beginning of The Souvenir Part I. And in fact it’s not difficult, because a lot of the films that inspired me back then still inspire me now. So there are films like Radio On (Chris Petit); New York, New York, the Martin Scorsese film; Ticket of No Return (Ulrike Ottinger); then also my own work, because I incorporate my own work into the film. I’m looking back at ideas that I had, Super 8 film, I thought that was a way of entering that time period, by being inspired by the same things that I was inspired by as a younger filmmaker.

And what about these days?

Well, actually right now I’ve had a desire to watch Stanley Kubrick’s early films so I’ve been going through them. Paths of Glory is particularly wonderful and I hadn’t seen it for many years. I quite like having my own seasons of films. Like Max Ophuls, I’ll watch all of Max Ophuls. I’m legally obliged to ask about the sequel. Can you say what stage you’re at?

Well, I’m editing it at the moment, quite near the beginning of the edit. I always take a while cutting a film. We shot it in the summer and it starts where Part I left off.

Yes, so directly after and it goes forward in time almost to the end of the ‘80s decade. And it’s focusing very much on Julie again, so she’s a through-line for the whole project, and it’s Julie at film school and the next stages of film school and the work that she does and how her life experience is fused with her creativity.

Was it a big headache to lose Robert Pattinson at that point?

At the time it was, but I recovered quite quickly. I changed the role, actually. It was one role he was going to play and I decided–since it was very much written with him in mind–to reconceive the idea of that character and in fact split that character into two so there are two young actors playing versions of the original character. [Editor’s note: Harris Dickinson and Charlie Heaton will play these characters, and Joe Alwyn also joined the cast.]

Do you have any idea about the release date?

Not yet, no. It’ll be some time later next year I think.

The Souvenir is now on Blu-ray/DVD/VOD and arrives on Amazon Prime on November 13.