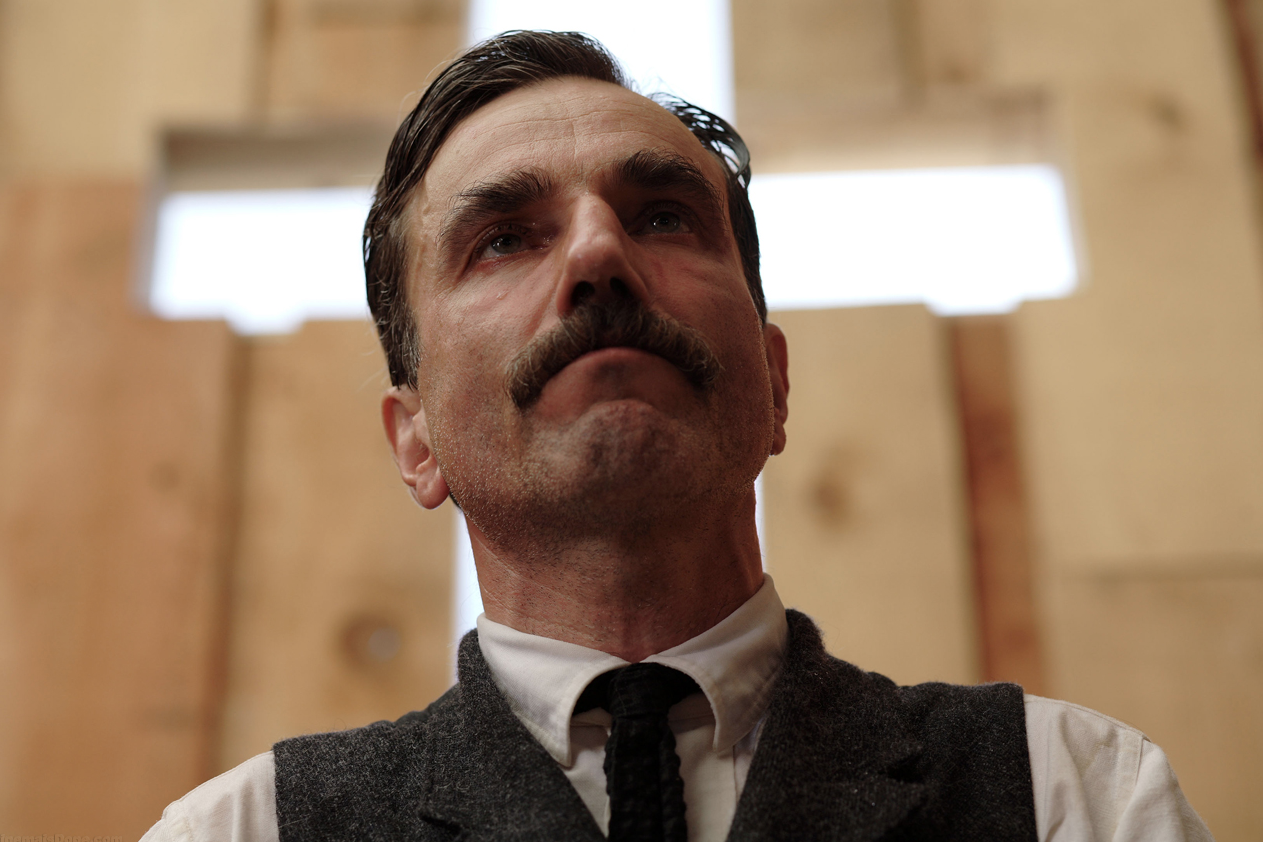 Paul Thomas Anderson is, at heart, a poet. While firmly on the side of traditional narrative cinema, his films have always favored aesthetic and textual lyricism over purely prosaic storytelling, even the masterfully precise prose of professed heroes such as Huston and Kubrick. Anderson is inclined to rhyme, to paint images and movements from his rawest expressive impulses. What this, often, is that he vacillates between a kind of hysterical narrative maximalism, a sprawling tapestry of people, places, and events (e.g. Boogie Nights, Magnolia) and an oppressive interiority, a hypnotic world of claustrophobic abstraction that, more than occasionally, strains the limits of coherency. (I’ve seen people who adore The Master and people who despise it, but both respond equally with ragged bafflement when asked to parse that film for a discernible meaning.)

There Will Be Blood, Anderson’s epic poem of period cinema set in the age of robber-barons and California mining rushes, elegantly bridges and hones the writer-director’s divergent impulses. Interior yet epic, focused yet vast, coherent yet cryptic, historical yet personal; it feels more singular, significant and fully realized than any Anderson project before or since, and at ten years old remains the magnum opus of an American master.

There Will Be Blood was adapted — very loosely — from Upton Sinclair’s novel Oil!, about the son of an oil baron brought to moral and political reckoning with his father’s corrupt and exploitative ways. Sinclair, a fiery political activist whose works teased the borderline between fiction and journalism, could not have held storytelling predilections more distant from Anderson’s. It’s indicative of this stark difference in philosophy that Anderson’s vastly altered adaptation flips the story’s focus to the oil baron himself, a fictional composite character named Daniel Plainview. Over the course of thirty years, Plainview ascends from struggling prospector to powerful magnate and beyond, into a stratospheric peak of madness both uniquely his own and archetypically American. (Under the current administration, Anderson’s chronicle of the nihilistic derangement of the ultra-wealthy and the nightmare inversion of the American Dream feels more terrifying than ever.) Bearing warped, dreamlike echoes of Citizen Kane by way of The Treasure of Sierra Madre and even 2001: A Space Odyssey, the entire film is rendered as both haunting character study and chronicle of the fiery clash of elemental forces — capitalism and Christianity, individuals and communities, oil and blood — from which sprang American modernity.

Daniel Day-Lewis is known by reputation as a “big” actor; he does not merely “act,” but acts with a theatrical, snarling, scene-devouring intensity. It’s a polarizing quality, to be sure, but in Daniel Plainview, Day-Lewis is given the ultimate role for his stature. Present onscreen in nearly every scene his eyes bulge and dart, reptilian, about the frame; his body sits in cool, coiled stillness before springing into violent gesticulations when Plainview is challenged; his voice, nearly unheard for the entirety of the film’s extended (and nakedly 2001-inspired) prologue, thunders and bellows with false congeniality, a slowly cracking facade of showmanship that groans and seethes with rage against Plainview’s world and perpetual emptiness within.

Plainview, a towering figure of ferocity and obsession, is capitalism itself. He is a man whose individualism, resourcefulness, and self-determination initially lift him out of the margins of society and the pits of the earth, only to further and further escalate as more power, wealth, and attention fall into his lap. By the end of the story’s three-decade span, the very same qualities that empowered Plainview to lift himself up by his bootstraps have continued to grow and mutate unabated, warping him more and more into a fiery, Nietzschean demon, an arch figure of solitude, misanthropy, paranoia, and senseless domination.

Complicating Plainview’s ascendency and continuously provoking his creeping madness is Eli Sunday, an evangelical preacher of the rural community that Plainview transforms into a bustling oil town. Eli is a man every bit Plainview’s equal in ambition and lust for power, yet he personifies social capital of an older breed: parochial, collective, Christian. He asks not merely for the material wealth of those beneath him but their very souls, the notion of which instinctually irritates and enrages Plainview as the two vie for the supremacy of their conflicting notions of authority. Eli, along with his estranged twin brother Paul, glimpsed only in the beginning of the film as he tips off Plainview to the Sunday oil reserve for a tidy fee, is given writhing, dancing life by Paul Dano, every bit Day-Lewis’s equal in the pantheon of character actors, whispering and shrieking to God with red-faced bulging eyes and quivering, veiny hands. The soft monotone of his speaking scenes gives way to calculated, disarming explosions of religious fervor in his sermons. Yet his nasally, pouting voice and delicate slender frame betray a weakness that viscerally provokes Plainview’s Darwinian spirit, like a rabbit biting a fox. He proclaims a greater, invisible cosmic order, one that favors him and the intangible bonds with which he holds others in thrall; yet to Plainview there is only earth, metal, and flesh. Eli and the Sunday family, juxtaposed with Plainview’s adoptive son H.W. and his physical and emotional transformations, present the two arch pillars of conflict — Plainview against religion, and Plainview against family — that complicate Plainview’s nihilism and form the dramatic crux of the narrative.

Like few on the screen before him, Anderson renders American history in eerie dream tones, never once reneging on the title’s promise of deep, continuous dread. True to his style, Anderson is unafraid to compress or expand time at his leisure, allowing some scenes to linger in rich silence while others collapse into loose, memory-like montage. Under the eye of DP Robert Elswit, Anderson’s camera glides slowly, majestically, over barren land and earthy wooden interiors, brown and dust-caked locales of California badlands and sets constructed with meticulous period detail; or else it floats like a ghost, with disconcerting intimacy, about the actors’ faces, dry, grimacing, either blanched in sunlight or wreathed in shadow. In panoramic wide-angle shots, sound collapses into a narrow tunnel and we hear only the muttered dialogue of key characters and the discordant violent strains of Radiohead guitarist Jonny Greenwood’s score.

Greenwood’s contribution to the film, incidentally, would be difficult to overstate; his score is nothing short of revolutionary. Far from a replication of his Radiohead material, Greenwood’s first-ever film score brings together his experience with the haunting, atonal strains of the band with his prodigious classical training in a feat of brilliant, anachronistic alchemy. An outfit of traditional stringed instruments, evocative of the film’s historical setting, produces the complex atonal strains of electronic and modernist avant-garde composition, creating a perpetually heightened state of uncanny detachment, imbalance and chaos to mirror the central character’s roiling psyche. Scenes of apparent mundanity are scored with oppressive ominousness; the process of prospecting and drilling oil is treated musically with the violence and dread of a horror film, as if a Jaws-like carnivorous beast were on the hunt.

This is because Anderson, the poet, visually constructs the film around a layered and violent interplay of primal elements. In an early scene, Daniel Plainview’s path to prosperity is wordlessly christened with the mingling of blood, filth, and oil on his face and clothing, fluids that will come back to him at key moments in the proceeding story. Thematically, they are triplets: the very act of extracting oil from the maw of the earth is treated by Anderson’s lens as its own primordial act of violence, as instinctive yet unholy as the drawing of human blood which it leads to. Often those fluids glisten in the light of hellish fire, or else shrink under harsh brilliant daylight.

It is only in one of the final shots of the unforgettable final scene that There Will Be Blood delivers fully on the promise (or warning) of its title. The camera pans steadily over the film’s only image of unconcealed gore, as dark blood and brain matter oozes free from a collapsed human skull. There is no more fire or sunlight now; only the glare of harsh electric lightbulbs, reflecting in patches on the advancing pool, in a room full of white. The finale is cryptic and shocking, but as the credits cut harshly into the scene’s conclusion, the soundtrack blares the triumphant strains of Brahms’ Violin Concerto in D major — heard previously in the film as Plainview’s new well gushes forth with prosperous oil. Plainview’s triumph and downfall are inextricably linked, and the cinematic narrator comments on the horrific spectacle with bemused irony. It is rhyming and lyrical, classic Anderson at the height of his abilities but with a clarity that has so often eluded him. It is understood intuitively by the audience, yet resists overly rational explanation. Poetically, however, it makes perfect sense.