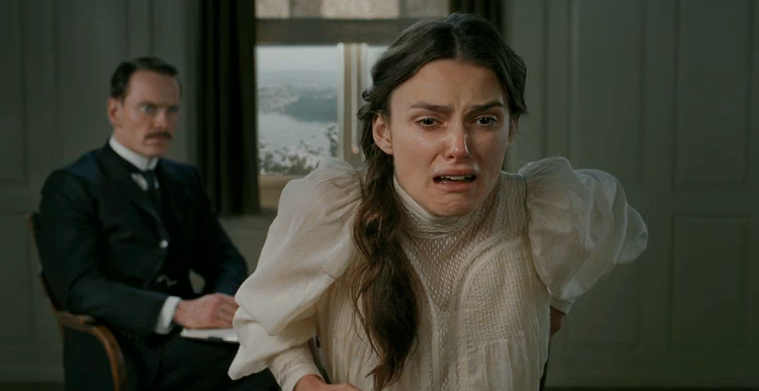 With a Venice Film Festival premiere set for this Friday, Sony Pictures Classics have released the official domestic trailer for David Cronenberg‘s highly-anticipated drama A Dangerous Method. The structure is nearly identical to the international trailer that popped up earlier this summer, but we get a few new glimpses. Written by Christopher Hampton – who is adapting his own play, The Talking Cure – it stars Viggo Mortensen as Sigmund Freud, Michael Fassbender as Carl Jung, and Keira Knightley as Sabina Spielrein.

After Eastern Promises in 2007, it has been too long since we’ve seen another Cronenberg film. I’m thoroughly excited to check this one out at TIFF and we recently got the first buzz from the film, with Jeff Wells reporting from a source, the film is “great, brilliant, precise and lucid,” and that “among all Cronenberg’s films the one it’s closest to is Dead Ringers.” Check out the new trailer below via Apple.

Seduced by the challenge of an impossible case, the driven Dr. Carl Jung (Michael Fassbender) takes the unbalanced yet beautiful Sabina Spielrein (Keira Knightley) as his patient in A DANGEROUS METHOD. Jung’s weapon is the method of his master, the renowned Sigmund Freud (Viggo Mortensen). Both men fall under Sabina’s spell. Are you looking forward to Cronenberg’s next film?