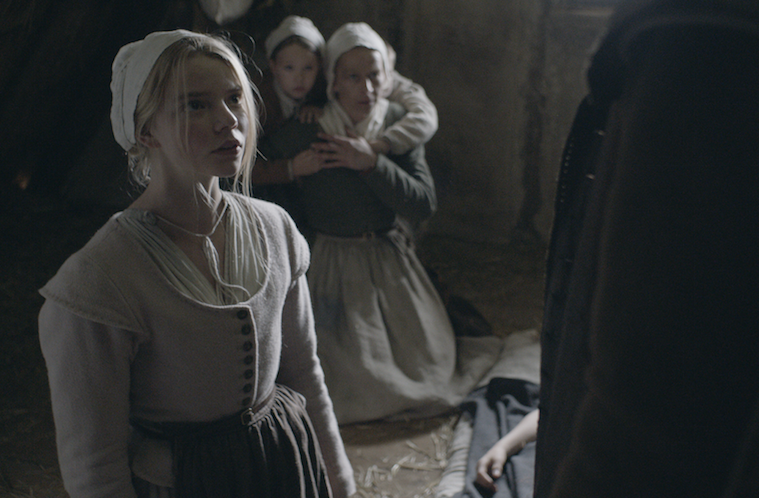 As a child, Robert Eggers was obsessed with witches and mythical creatures, while other children dreamed of Disneyland, Eggers’ dream vacation probably looked more like something out of Häxan. It makes sense then, that he would grow up to become a sorcerer of sorts, at least one could call him that based on the enthralling qualities of his debut feature The Witch, an otherworldly folk tale set in seventeenth century New England which deals with how a Puritan family chooses to face the presence of the occult. Or at least, what they think are the dark forces that might have turned the eldest daughter, Thomasin (Anya Taylor-Joy) into a witch.

Not one to place judgment on his own characters, Eggers invites the audience to try and uncover the mysteries along with the family. We aren’t allowed to feel smarter than the characters, just because we’re “modern,” instead he shows us how human fears have probably remained the same since the beginning of time. He takes the camera into the wilderness, and we are both seduced and terrified by its dark beauty. A genre-defying film, The Witch is a truly delicious experience that becomes richer with each viewing. Upon its premiere at the 2015 Sundance Film Festival, it won Eggers a Best Director award for his seamless, confident work. As the film gears up for its theatrical release we spoke the Eggers about its themes, his favorite screen witches, and the film’s undeniable feminist subtext.

The Film Stage: You used to go to Salem as a kid, do you recall other people thinking of you as the odd kid for that, like an Addams family member of sorts?

Robert Eggers: [Laughs] Yeah I mean, I guess that was kinda weird. I also liked colonial Williamsburg and Plimoth Plantation, all that kind of stuff. I wore costumes to school until I got beat up for it, and I would ask for costumes instead of toys for Christmas.

More than anything else, a witch was a witch because she exerted sexual power over men and other women. A power she couldn’t control herself because it wasn’t magic, it was just part of human nature. Female sexuality has always been associated with evil, we probably wouldn’t have mermaids, and femme fatales in film noirs without witches for instance. Was this the tragic tradition you were looking to explore in the film?

Yeah, you’re right, mermaids are these beautiful women who are gonna grab us and draw us back down into the unconscious forever. [Laughs] I think what I was trying to understand was what this witch archetype was all about, and very much in the context of the 17th century or the early modern period. A lot of people don’t quite understand that witches were something people believed in. They were a reality, the way a tree is a tree and a rock is a rock. A witch was a witch, and people knew what that was. It wasn’t as if religious leaders were finding an outspoken woman or a woman with sexual or other powers, and calling her a witch as a false conspiracy to get rid of her because they were threatened by her power.

In fact the society’s consciousness was so male dominated and so threatened by female power that they literally believed these outspoken women were fairy tale witches capable of doing all the terrible things a witch does in tales. Having them come to this conclusion was intense, so this was a desirable archetype I wanted to explore, as you mention, the witch pops up even today in our culture, claiming female power in a positive way. Sexual power is still something we’re trying to come to terms with as a collective Western culture.

I can think of few things as scary as a time without antibiotics and women’s rights. Having the gift of time on our side, did making the film make you think about what elements of our society will terrify people in the future?

Honestly, religion, mythology, fairy tales, folk tales, the occult are all things that make me tick, so this was stuff I was thinking about even before The Witch. Also I wanna say that I wasn’t intending to make a feminist film, I wanted to make an accurate portrayal of witches in the seventeenth century and feminism couldn’t be ignored, it just burst off the page, so it happened that’s what I ended up making. Archetypes always reconsolate themselves, today in this “rational age” where science is everything and science is the answer, people are afraid to actually recognize how the scientific method is far from perfect. I do wonder if in 400 years people will think it was so funny how our perspective of science and numbers in the 21st century was the god archetype, and our blind faith was in the accuracy of numbers. Numbers are things you can’t control, they have a life of their own like any archetype.

I loved the spell the movie put me in so much I almost wish I wasn’t talking to you, because you’ll probably dispel some of that effect. When it comes to films, is it crazy to wish for a pre-internet time when audiences just allowed themselves to be surprised by the films until they sat and watched them?

[Laughs] I know. Me, too. If I hear about something from Cannes or whatever, as soon as I hear something tiny about it I plug my ears and way for it to come out. I’m often cringing at the spoilery marketing materials that I see, but at the same time I have a really unique opportunity for this film to be released to a wide audience, and I’m not an alchemist doing this stuff for my own reasons, I’m trying to communicate with other human beings what it is to be human. So to be able to share this broadly is pretty exciting.

For example, I tried to keep Black Phillip pretty subtle, but of course he’s become an internet meme. But you know what, what I think is OK about that is that a wide audience who might not be as used to a film of this pace, things like Black Phillip and the twins, and how they exist with such potency in the marketing materials potentially can give broader audiences something more narrative to grab onto, and I think that’s positive, even though it’s not how I personally like to dig into films.

I saw the film and a few days later I re-watched Lars von Trier’s Antichrist, both of which deal with very similar subject matters. Both you and Von Trier are self-confessed Tarkovsky lovers, did you have any other spiritual siblings in mind for The Witch, maybe something for a double bill?

I bow down to Bergman and Dreyer. I think in a certain way every Lars von Trier movie is a remake of Ordet, and this film is kind of like the opposite of Day of Wrath in many ways.

Anjelica Huston in The Witches gave me all the nightmares as a kid. Who are your favorite screen witches?

It probably all started with Margaret Hamilton as the Wicked Witch of the West. When I was four years old she was scary as hell!

You have a background in theatre design and direction, and as Broadway gears for the umpteenth revival of The Crucible, I wonder if you ever saw The Witch as a theatre piece?

No, it’s funny — some people have said it could be a theatre piece. You could do it, but it would take a lot of effort, because all the kind of climactic bits where there is non-diegetic sounds and there’s only music, or when they’re going through the forest for instance, I’m sure there’s a way to do all of that onstage, but I’ll leave that for Julie Taymor to figure out.

The Witch opens nationwide on Friday, February 19. Watch Eggers dissect a scene and discuss the film with Stuart Gordon above.