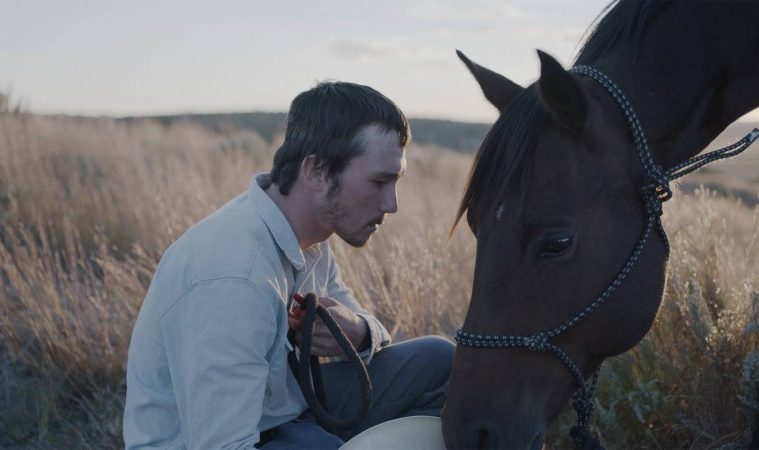 Cannes Review: ‘The Rider’ is a Beguiling Docudrama Set in the American Plains

What does a cowboy do when he can’t ride? Chloe Zhao’s absorbing South Dakota-set sophomore feature has its titular rider come to terms with such a fate, in a film that’s a beguiling mix of docudrama and fiction whose story echoes much of history of its actors’ own lives. Zhao’s combination of the visual palette of Terrence Malick, the social backbone of Kelly Reichardt, and the spontaneity of John Cassavetes creates cinema verité in the American plains.

A Lakota Sioux on the prairies of the Pine Ridge Indian Reservation, Brady (Brady Jandreau) is a hard-as-nails cowboy whose dreams of becoming a rodeo champ are dashed by a brutal head injury. The first scene has Brady in a down-and-dirty bathroom removing staples from his forehead, under which a metal plate keeps his fractured skull in place. Still recovering, he’s forbidden from getting back on horseback, but this man-of-the-earth can’t turn his back easily from what’s he believes is his destiny. He returns to working on the land as a horse trainer, but soon devastated as his childhood horse Apollo is sold to pay the bills. His friends tell him to man-up, work through the pain: “it’s all the same for a cowboy!” But his body isn’t what it once was — seizures in which his hand clamps shut are a visual metaphor for a man still clinging to the past — and a return to the rodeoing could hurt not only himself but those around.

The harsh but beautiful scenery of the vast Dakota plains are cruelly juxtaposed against the brutal reality of his physical and emotional recovery. Actor Brady Jandreau really did fall off his horse in 2016 and spent three days in a coma, and Zhao is keenly interested in the those who surround Brady afterwards (both real and fictional). His sister with learning difficulties Lilly (Lilly Jandreau) and drink and gambling-addicted father Wayne (Tim Jandreau) are key presences, figures that both help and hinder Brady’s recovery, and the film is as much a drama of a family coming together. His sister is a friend and gives support, but his father reminds him of everything he doesn’t want to be. “We’ve got to play the cards we’re dealt,” his father tells him, “Sometimes dreams aren’t meant to be.”

One of Brady’s best friends Lane Scott (playing himself), a former rodeo champ whose own riding accident was far more severe, is a devastating reminder of the risks to all “being a man” can be. Scott is now mostly immobile and under constant care, and his heart-breaking scenes that play as suggestions that having dreams – perhaps the American Dream itself – is a defect of character, that living well is the best revenge. They look back together at old clips of his rodeoing days on YouTube, a reminder that in the 21st century leaving the past behind is harder than ever.

Zhao’s film has some fine photography by cinematographer Joshua James Richards (who also filmed Sundance breakout God’s Own Country) — not just grandiose scenery, but extraordinary sequences in which Brady trains up feral horses. In one dizzying sequence the camera appears to stay in the center of a ring while Brady runs the horse round and around, faster and faster. Zhao’s technical accomplishment of combining Days of Heaven-esque Malickian scenery and almost neorealist-style docudrama make for a tale that is undeniably powerful.

The Rider premiered at the Cannes Film Festival and opens on April 13, 2018. See our coverage below.