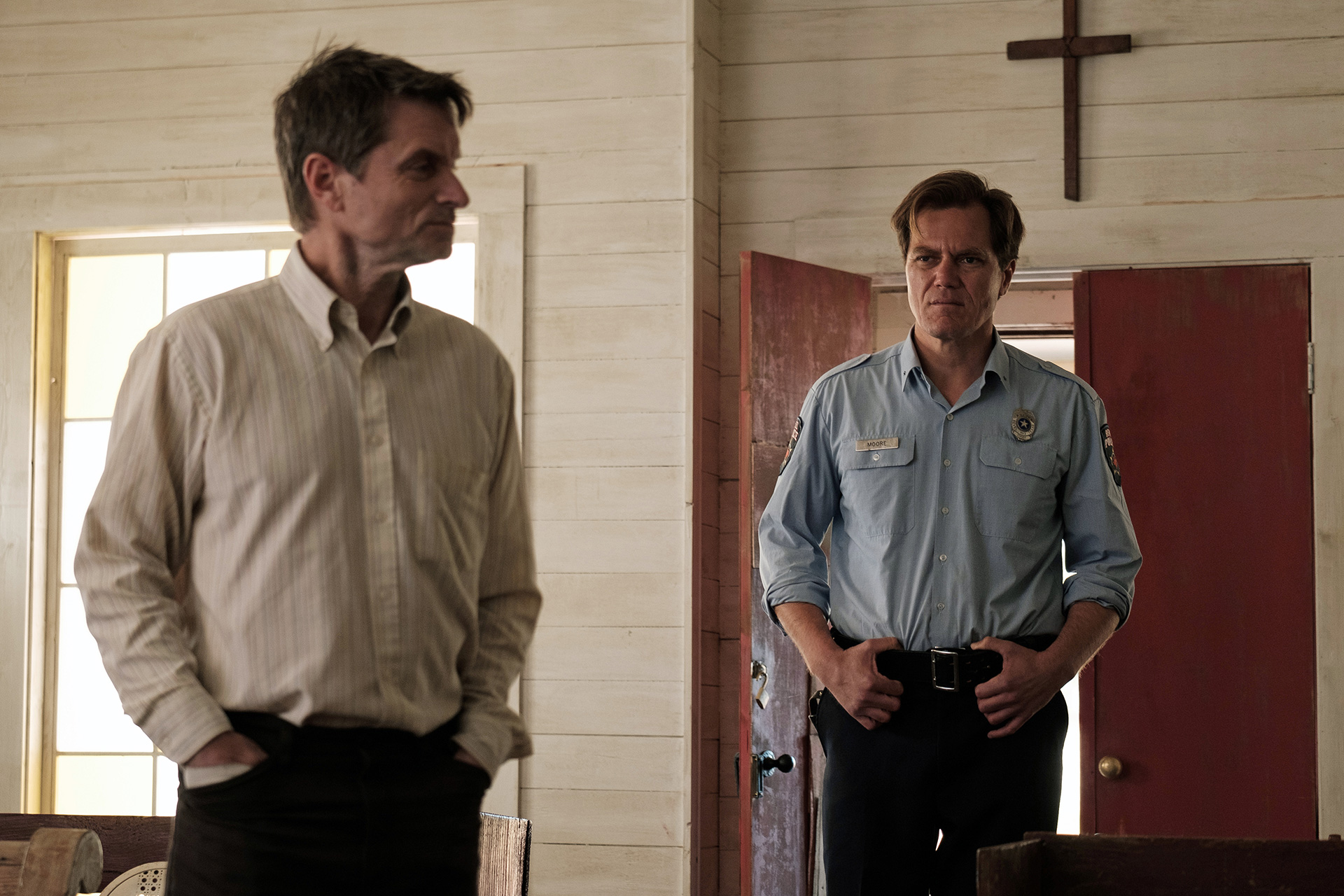 Reverend David Martín’s (Bruno Bichir) fate wasn’t set in stone while driving down a Texas highway with a bottle of wine in his hand. He still had choices. Should he stop to assist a man (Shea Whigham) found face down in the dirt? Should he offer a ride to the place that will serve as his own new beginning? Should he confront him about a dark truth his conscience won’t ignore? You might say that being a man of God did seal his fate since it instilled a duty that guaranteed he would help this fallen soul back to his feet, but you’d be wrong. God didn’t speak to him, his guilt and sins did. Helping that drifter at his own peril was a voluntary act of penance.

David did so, however, because he had already confronted those sins and was hoping to walk out into the light on the other side of them. Whigham’s character hasn’t yet faced what he did. He’s still haunted by the images of a fire and thus untrusting of his newfound savior thanks to the paranoia his mind continues to stoke. Unready to confess, this drifter deems any provocation to the contrary as an attack from which he must protect himself. If the inevitable mode of “self-defense” manifests as murder, it’ll become one more thing to recall in his nightmares and one more thing to run from without fully grasping the cost. There are consequences to his victim’s loss and his arrival in his place. And they always roll downhill.

To ensure that truth along with gravity is the inherent privilege separating these two men beyond their morality. That’s the underlying factor director Scott Teems and cowriter Andrew Brotzman keep from Damon Galgut’s original Apartheid-set, racially complex novel to create their Lone Star state adaptation The Quarry. Why does Whigham believe he can get away with what he does? Because he’s a white man whose past is unknown and his victim’s a Mexican immigrant no one will miss. He can stroll into town with David Martín’s name on his lips, go through the motions at the altar, and even believe the words he reads from the Bible about finding redemption from a congregation that also prays for second chances and the mirage might hold without confessing his sins.

What about this drifter’s choices, though? Beyond killing David is the location of his burial and choosing to sleep despite his new landlord (Catalina Sandino Moreno’s Celia) warning his van would likely be robbed during the night. He therefore allows two Mexican youths (their immigration status is left ambiguous if only because the local police enjoy beating them like dogs rather than deporting them away) to steal David’s things and unwittingly shoulder blame when blood is found. While Chief Moore (Michael Shannon) believes Valentin (Bobby Soto) and Poco’s (Alvaro Martinez) skin color renders them capable, he’s unsure about Whigham because of his. Being white provides this stranger an unearned benefit of the doubt and yet his being white also casts suspicion considering they’ve only recruited Spanish priests before.

The film Teems has created is thus one that hinges upon how these turns of events will impact Whigham’s soul. He’s not alone in feeling guilt or regret (Celia wishes she helped her cousins Valentin and Poco more and Chief Moore wishes he could be the law man everyone liked rather than the one who believes he has no choice but to discriminate), but he’s the one with a front row seat to his salvation. Whether it appears in the form of asking forgiveness from the God he’s hiding behind or from these two innocent boys ultimately being blamed for his crime is his decision. And watching Whigham’s performance makes it an excruciating ordeal insofar as his finding a life for himself on the back of that homicide.

Does helping a congregation so used to being judged as sinners rather than accepted clear the slate? Does being the man they need in lieu of David Martín perhaps having been the opposite give his deceit purpose? The easy answer to both questions is a resounding “No” and yet we’ve all found ourselves wondering if we can forget past indiscretions by remembering present charity. Chief Moore wonders about it every time he leaves Celia’s bed because his feelings about her aren’t enough to reveal it to his white friends. Celia wonders every time she sees her cousins getting in trouble while remaining silent. Valentin wonders when confronted by the opportunity to save his little brother at his own expense—a lie to make another lie less tragic.

The idea that any action you take now is a means of compensation, however, only proves one thing: how wrong your first act was. Maybe you can live with it. Maybe you can watch as it grows with every new devastating act by others in its wake. That’s how monsters survive this world—by refusing to see themselves as anything more than a catalyst for the next round of unavoidable violence. What makes The Quarry compelling is the fact that we know from the start that Whigham isn’t a monster. His performance is too full of heartbreak and remorse for that to be true. This man is caught within a loop he knows he can stop if he only finds the courage to do so. It’s not easy.

Because Teems and Brotzman understand this, they’re able to let a story with familiar mistaken identity tropes breathe in uncertainty. It’s not as effective as the other recent “false priest” film Corpus Christi, but it definitely has its moments nonetheless. Whigham is a huge reason for this because he gives himself over to the character. His drifter lies to himself so fully that he might even choose to adopt a monster’s indifference even as we see the sorrow in his eyes upon doing so. He hopes to earn forgiveness through his flock only to later ask for it directly from someone he wronged. But neither them nor God can despite interpretations of the former’s refusal pointing the latter’s way. The only person who can forgive you is you.

The Quarry hits VOD on April 17.